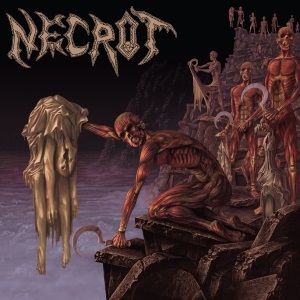 20. NECROT, “Mortal” (Tankcrimes): Death metal is in pretty good health despite its name, and the amount of good newer bands help making it that way is plentiful. No doubt Bay Area maulers Necrot are part of that contingent, and their second record “Mortal” is a huge part of why they’re so highly regarded. This record, which is seven tracks over 38 minutes, is an ideally portioned record that’s incredibly impactful on first listen and then keeps gaining muscle every time you visit.

“Your Hell” churns open and begins pounding away heavily, as Luca Indrio’s growl’s open lacerations, and the drums mash your life into pieces. “Dying Life” thrashes away as the growls lean in and start bruising, and the guitar work takes off and leads to rapid-fire dizziness. “Asleep Forever” starts in a vicious spiral as the guitars encircle, and gruff growls up the ante on the sickness. Guitars light up and rip out guts along with the chorus where Indrio howls, “Everything leads to the end when we’ll be asleep forever.” The record ends with the 8:33-long title track that explodes from the gates with riffs menacing and raw growls choking as Indrio howls, “Mortal dies, lost, carried away, mortal dies, everything fades away.” Great, timeless death metal album that’ll be remembered as one of the era’s best. (Aug. 28)

For more on the band, go here: https://www.facebook.com/cyclesofpain

19. VÖLUR, “Death Cult” (Prophecy Productions): Creativity and imagination certainly are two things not devoid in metal, but some bands have it in greater numbers than others. As for Toronto-based trio Völur, they bring something entirely new to the heavy music world and always have, and that explodes through the roof on their amazing third album “Death Cult.” The record was partially inspired by Germanic tribes near the Baltic Sea in the earliest days of A.D. sacrificing slaves via drowning to their goddess Nertha, and it’s a dramatic, sweeping album that sounds like no others.

“Inviolate Grove” begins with electric violinist Laura Bates’ strings sweltering as the playing begins to pump, and melodies enrapture. Both Bates and bassist Lucas Gadke sing (they trade off throughout the record) as the violin makes inroads into your soul. Dead Moon” simmers in eerie choral circles and a bed of strings. The first portion is rather calming, with the violin quietly shuffling like a ghost before they begin to soar and ache. Bates’ shrieks then strike and tear through flesh as the playing is utterly gut wrenching. “Reverend Queen” is your closer, bathing in feedback before the strings loop in, and a choral section opens its jaws. Things turn ugly as the growls hammer, melodies stir, and Bates’ violin strikes back and blares with agitation. No one sounds like Völur, and no one should really try. They’re that special. (Nov. 13)

For more on the band, go here: https://www.facebook.com/VolurDoom

18. SVALBARD, “When I Die, Will It Get Better?” (Translation Loss/Church Road): Svalbard’s second record is one of the most necessary listens of the entire year for two reasons, one good and one bad. First, their fresh and enthralling mix of metal and hardcore found another level on “When I Die…” as it just explodes with energy and power. The negative is the album highlights so many societal issues (sexism, abuse, people ignoring others’ mental wounds) we still are battling and apparently always will be that it makes it feel like pure darkness to realize these problems never seem to get proper attention. Hopefully Svalbard’s messages can wake people up, while their raucous music aims to soothe the soul and light fires among those who hurt along with them.

“Clickbait” opens in moodiness as darkness spreads, and then the whole thing explodes as guitarist Serena Cherry’s voice smashes over the verses, leading into the venomous, “We are used as fodder to generate comments, because the presence of a woman is apparently reactive, fuck off!” “Listen to Someone” is one of the most important tracks here lyrically, as it conveys the hurt and confusion of mental illness coupled with people who just won’t absorb their words. “Silent Restraint” quakes the ground as Cherry’s voice blasts holes in the earth, and guitarist Liam Phelan joins in with his melodic, powerful singing, as both trade back and forth. “I’m sick of feeling like a burden, I’m sick of having no control.” “The Currency of Beauty” pours open as Cherry immediately stabs into the scene, calling, “I am not your trophy, I am more than my body,” while the track gears up and crushes everything in front of it. This band is on fire through this entire record both musically and emotionally, and hopefully they can help break into people’s black hearts and give them a much-needed slap to the face. (Sept. 25)

For more on the band, go here: https://www.facebook.com/svalbarduk/

To buy the album (US), go here: https://translationloss.com/collections/pre-orders

17. BEDSORE, “Hypnagogic Hallucinations” (20 Buck Spin): We just got done talking about the embarrassing riches of death metal we have right now, and Italian weirdos Bedsore also are a major reason for that, as their bizarre debut “Hypnagogic Hallucinations” can attest. This was one of those records I liked from the first time I heard it, but the more I took on this seven-track, 40-minute album, the pathways into its psychosis and the bizarre ferocity truly took hold, making it one of my favorites of the year.

“The Gate, Disclosure (Intro)” opens the record with organs sweltering and the drums awakening before a synth fog hovers over the area. Things feel proggy and weird before elegant guitars unfurl, and we float into a psychedelic dream and toward “The Gate, Closure (Sarcoptes Obitus)” where guitars heat up and enter a death spiral. “Deathgazer” has riffs electrifying as the tempo stomps guts, and the playing stymies. Animalistic howls jab into your sides while the pace chews up again, leads boil and moisten your skin, and then things start to rip apart again before ending abruptly. “Disembowelment of the Souls (Tabanidae)” aggravates blues strains again, floating in your head, then guitars burn, and the screams become acidic. The playing feels like a slow-droning crash for a stretch as guitars light up again, and the ground rumbles. Closer “Brains on the Tarmac” then lurches forward as things begin reflectively as cold guitars slowly awaken into a dark noir and things gallop open, as maniacal devastation sets its trap. This is devious and ugly and will leave chills down your spine that refuse to relinquish their grip. (July 24)

For more on the band, go here: https://www.facebook.com/bedsoredeath 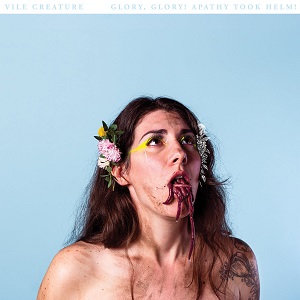 16. VILE CREATURE, “Glory, Glory! Apathy Took the Helm!” (Prosthetic): Hamilton, Ontario, duo Vile Creature always have filled their apocalyptic doom with heavy shadows and darkness, something so impenetrable that it weighs you down while destroying you. Yet, on their awesome third record “Glory, Glory! Apathy Took Helm!” they aim for something different, that being lighting the fires of human compassion and refusing to de drubbed into malaise when things seem to be too much. Vic (drums, vocals) and KW (guitars, vocals, percussion) still find darkness, but they work their hardest to make sure they don’t give in.

“Harbinger of Nothing” opens the record in the midst of a crushing storm as doom lands, and burly riffs flex their muscles. The track then settles into a mid-tempo bashing that hints at calm but quivers on its edges as Vic wails, “Tell me who I am, if you’re all knowing, the arbiter of moral purity.” “When the Path Is Unclear” has guitars awakening as things slip into a trippy vibe, and melodies drip into space buzz. Vic speaks the words, “The champions of your past conquered nothing, and neither will you.” A two-headed beast “Glory, Glory!” and “Apathy Took the Helm!” closes off the record with some of the most emotionally heavy playing of the entire year, as they’re joined by Laurel Minnes with her band and choir Miniscule, and they make it feel like the world is beginning again, like drops of sky are falling. On the second half, Vic’s vicious shrieks rain down as they also mutilate behind the kit, thickening the doom waters with blood. Angelic hell rises to the surface and seems to quell the fires before everything kicks back in again. Vile Creature followed this great record with spending 2020 giving their fans fun surprises at every turn, making this terrible time a little more bearable.  (June 19)

For more on the band, go here: https://www.facebook.com/vilecreature

For more on the label, go here: https://www.prostheticrecords.com/