Rumored to be morbid ...

The flood of reaction to the new Morbid Angel album has fascinated and amused me. I don’t remember such a groundswell of feedback for a record since Metallica’s much-maligned “St. Anger,” and people still pick apart that album to this day.

All of the excitement and build up for Morbid Angel’s comeback, that includes David Vincent’s return to fronting the band for the first time since 1995’s “Domination,” has been building for years ever since rumors started to circulate that a new album would be in the works. It then took on a mini-“Chinese Democracy” life of its own when every year would begin with hope that this would be the time for a new Morbid Angel effort, and then 12 months would pass with nothing from the band. Some wondered if we’d ever get that album in our hands. Now many people are regretting the thing saw the light of day. 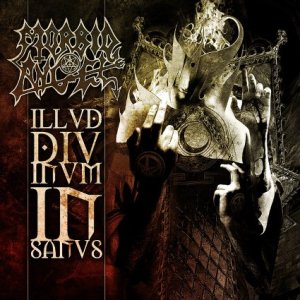 “Illud Divinum Insanus,” in case you have not heard, hasn’t exactly lit the world on fire. The reaction has been lukewarm to outright vicious, and despite a few metal musicians coming out in support of the new disc, there has been a tidal wave of backlash, especially on the Internet. You know those Internet types. This actually built my anticipation and interest in hearing this album, not only because I’m a longtime Morbid Angel fan, but because I assumed the negative hype was overblow. I did have a promo – like many in the media – a while back, but it was a beeped version designed to prevent the songs leaking online. I get that approach from their label Season of Mist, and I have no problem with their decision, but I can’t listen to beeped promos. They’re really, really distracting, and all those chirps and buzzes inserted into the thing take away from the music. So I waited for my clean version the day the record was released and went from there. That was a few weeks ago, and while I really wanted to say something on record about it sooner, I couldn’t. I tried not to have a kneejerk reaction to this, because no doubt, this album is different, and I didn’t want to just sound like another angry voice in the crowd. So I listened, digested, revisited, reflected … and ultimately rejected.

Guitar god Trey Azagthoth has made it no secret he has an affinity for techno and industrial sounds, and hey, nothing wrong with that. I’ve done my share of Combichrist, Ministry, and KMFDM pieces in the past, and while it isn’t my preferred style of music, I get the appeal and have enjoyed some of the albums. And I’m not going to suggest these sounds have no place in Morbid Angel’s music because it isn’t my band and it isn’t my choice. I kind of admire their decision to go in a different direction and add some elements most probably didn’t expect from their music. Many bands are not willing to take such risks, and had Morbid Angel – Vincent and Azagthoth are joined by guitarist Destructhor, and drummer Tim Yeung, who capably filled in for injured Pete Sandoval — just gone into the studio and simply made a full death metal assault their hearts were not into, funny enough the reaction probably would have been the opposite. But would the band be happy with it? We always kind of forget, as listeners, that we don’t get final say. I don’t think we deserve it either, though I’m sure some will disagree with me on that. From everything I’ve read from the band, this is the direction they wanted and they made the record they felt they needed to create. I respect that. I just don’t like the results. At all.

It’s not like the whole record is an entirely new approach. In fact, the bulk of “Illud” is straight-up death metal. We’ll get to that in a minute. Following a cheesy opening “Omni Potens” that really isn’t unlike “Intro” on their classic “Blessed Are the Sick,” we’re immediately met with “Too Extreme!” a song title that sounds like it was dreamt up by an old man trying to sound hungry and mean. And while these guys are vets, they’re by no means old. So what the hell, man? The song sounds like something that would be vomited by one of those here-today-gone-later-today, second-stage Ozzfest bands from 1997, and all the rapid-fire beats take away from Yeung’s drumming. It’s B-level Ministry and White Zombie. At one point, Vincent howls, “We’ve come to spread our insane,” and every time I hear that, I guffaw. “Destructos vs. The Earth/Attack,” a song that aforementioned Combichrist have remixed for the B side of the “Nevermore” single, is just ridiculous. We’re met with more techno babble, weird mechanical vocals, and these stupid alien-like effects on the chorus. Closer “Profundis-Mea Culpa” is pretty bad too, with repetitive chants and an overall sense of malaise, but that doesn’t hold a candle to “Radikult,” a flat-out awful song that sounds like Marilyn Manson at his very worst, with an embarrassingly bad line that goes, and sing along with me if you’d like, “Kill a cop cop, kill a cop, kill a kill a kill a cop.” What the shit? This type of thing is better off left to bands who are cranking out shitty rebellious metal in their basements in high school. It’s juvenile garbage. A top-of-the-line, legendary band coming up with something like this is unthinkable. This is worse than any song on “St. Anger” by a wide margin. Morbid Angel will have to try really, really hard to top this horribleness.

By the way, if you want to see a fan-made video for the Combichrist remix of “Destructos,” I mean, if you really, really feel like you need to torture yourself, here it is:

As for the other songs, the ones that are more in line with the band’s classic material, they’re just OK. None of it is particularly moving, none of it really makes an impression, and beyond “Nevermore” and “Existo Vulgore,” I don’t really need to hear any of this again. Some of the cuts, such as “I Am Morbid” and “10 More Dead” wouldn’t even have been good B-side tracks. They’re lifeless and ordinary. Maybe they should have shelved the idea of any straight-up death metal songs at all, because these ones that are here are not representative of this band’s best work.

This is a failed experiment, quite simply. It’s also too bad that, after all the anticipation, excitement and long waiting, this is what we’re given. Again, I don’t blame the band for wanting to try something different. It’s certainly their right, and if they felt that creating a classic-style Morbid Angel record was not something that interested them, they did the right thing not doing that. But this is not a fitting alternative. It’s just a bad piece of work, one that would make me a little red-faced if I were to listen to this in my car or in public. It’s meat-head music, almost perfect for those Hot Topic kids who don’t know any better yet. Morbid Angel are better than that. They were the cream of the death metal crop. Now they’re veterans who want to take a new path but don’t seem to know how to travel that road without humiliating themselves.

For more on the band, go here: http://www.morbidangel.com/