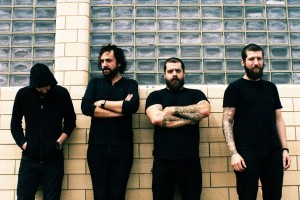 This is a curious case. OK, so we do stuff from time to time that isn’t purely heavy metal or metal at all, as long as there’s some kind of logical crossover appeal. Generally those albums are from decidedly non-metal labels but still are worth your time if you have an open mind. Today we have something that is on a very metal label but really doesn’t belong in that genre at all.

Junius is more like post-rock dreaming, melodic storytelling, and spacious exploration. They have toured with metal bands, most recently taking Ghost’s slot on the Enslaved tour, but they could hook up with a mainstream band such as Foo Fighters or Muse and be right at home. In fact, a jaunt like that might cause this band to blow up commercially. Their new album “Reports From the Threshold of Death” is far better and significantly more riveting than what those arena rock bands are doing anyway, so they’d probably show up the headliners. No one wants that. They also likely will mislead people not only because of the Prosthetic Records stamp on the back of their album but also from that record title that sounds like a guttural death metal assault that goes for your throat. It’s anything but that.

Now, if you read about Junius in Rolling Stone, a magazine that’s proved over and over they shouldn’t even bother covering metal

because of their total lack of understanding, you saw they were called a cross between Neurosis and the Smiths. I certainly would not pick that combo to describe this band. Their new record contains zero resemblance to Neurosis as it isn’t nearly cataclysmic enough, but I can hear Godspeed You! Black Emperor, Pelican, Caspian, My Bloody Valentine, the Deftones, Cave In and Jesu musically, and vocally, there are hints of Hum and … brace yourself for it … Coldplay. I only mean that in how Joseph E. Martinez’s voice sounds, as it’s full of compassion and drama. It’s not like he and the band are playing pretty love songs, though they do a fine jobs exposing their hearts. Maybe that’s the only way I can sense any connection with the Smiths. Nice try, RS.

Along with their post-rock leanings, there are hints of goth rock and New Wave as well, mostly because of the lush, swarming keyboards and Martinez’s darkness when singing. They open with a soul-crushing, surging salvo on “Betray the Grave,” a song title that sounds like it came from a Chris Barnes songbook but instead is a swelling rocker, where Martinez urges, “Never fear for your life.” “All Shall Float” swims through the cosmos and might make Chino Moreno jealous when he hears the fantastic delivery; “Dance on Blood” is a moody, up-tempo rocker that has the only real hints of sludge on the album; “Haunts for Love” would have sounded excellent on ’80s alternative rock radio and likely have been a big hit; “Transcend the Ghost” floats on synth whir and eventually a bit of doom rock; and closer “Eidolon & Perispirit” is a New Wave-flavored entry that’s dreamy and filled with atmosphere, with Martinez pleading, “Bring me into your light.” It brings to a close a really fantastic rock record, filled with strong songwriting and honesty that is basically absent from the mainstream. In fact, Junius could do a great deal of good if they were to be included on pop, Top 40 radio playlists. Their songs are too strong to ignore, and with proper exposure they could smarten up your average music listener.

Junius has another new release on the market in their split with post-metal maulers Rosetta, who are more muscle-bound and burly. The Translation Loss-released effort allows each band one song, and both make the best of the time. Junius’ contribution “A Dark Day With Night” is far longer than anything on their new record, clocking in at a little more than eight minutes, but it’s pretty much in line with the material on “Reports From the Threshold of Death.” Only difference is this song basks a little more in shoegaze. As for Rosetta, their cut “TMA-3” has a bit more melody to it than some of their past works, almost as if they’re veering more toward Junius’ frame of mind. But fear not, their guttural, hefty growls and shouts are in place, so they certainly haven’t skimped on the hardcore-laced brutality, but you do a little more dreaming than usual on this song. Altogether, this package works pretty nicely, and you experience a dose of two pretty different bands that have similar center points but different paths away from the core. Also, if you’re hesitant to commit to a full-length from either band, this gives you a small taste of what each does best.

I’m curious to hear how metal fans react to Junius. I’m sure since they’re on Prosthetic, people unaware of their work will expect bulldozer violence and mosh-pit fodder. They’ll be disappointed if they’re only in it for those qualities, but more open-minded listeners are sure to take a serious ride with these bands on their adventurous songs. They’ll never win the prize for the heaviest band in the world, but Junius certainly are in the running for the most thought-provoking.

To buy “Reports From the Threshold of Death,” go here: http://prostheticrecords.bigcartel.com/artist/junius

For more on the label, go here: http://www.translationloss.com/