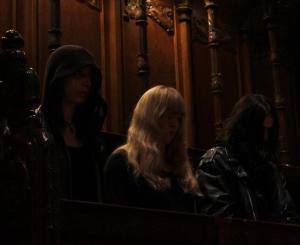 There is so much doom and dark metal that comes out these days, that’s it’s growing increasingly more difficult to tell who really means it and who is just going through the motions because it’s what’s for dinner this week. In turn, that makes it more difficult for the listeners (and the writers) to determine what bands, by word of mouth, are worth checking out and devoting your time and what ones will be onto something else or be irrelevant a year from now.

Actually, the answer to this dilemma is quite simple: Listen to the bands in question. I’ll give you an example of two bands I saw live the last seven days. I finally got the see The Devil’s Blood in the flesh after a long time spent listening to their albums, and after experiencing them play (and having the weird honor of seeing the band retreat to a secret place to douse themselves in blood), I came away feeling like their live ritual is very honest and forthright. There was something there you had to see to believe, and I always felt their recorded output always was quite genuine. On the other hand, I got to see the much-talked-about Ghost perform in a rather antiseptic, impersonal venue that would not seem to be a fitting place for them, but after they were finished playing, I came away convinced more than ever that their shtick is just that. It’s an act, and a good one, and while the band was very strong live and I like their music, I don’t believe a word of it. I might be wrong, but it’s how I walked away feeling about these two acts. 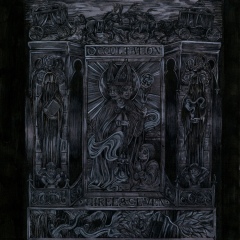 That takes us to NYC’s Occultation, a band I have not seen play live but whose album “Three & Seven” has spent a lot of time in my ear buds since the promo arrived. Admittedly, I was sort of preconditioned to like them because one of its members is EMM (Nameless Void), guitarist/vocalist of the unstoppable Negative Plane, and because it has the Profound Lore stamp on it. But in the end, the music is what matters, and going the distance with it would be the only way to truly tell what magick, if any, it beheld. And it turns out, as I had suspected, that what the seven-song record contained was something out of the ordinary, unsettling, and totally believable. I never felt like this band was conjuring dark spirits just to do it or to get people talking about them. They did it because it’s what they do. If you’re uneasy, good. You should be.

Made up of EMM (guitar, backing vocals, organs), V (vocals and drums) and MAL (vocals, bass), this trio makes witchy, ritualistic music that is frightening to hear. But not in the skulls and blood and devils way. These are not cheesy-horror-film, made-for-Hot-Topic, blood-and-guts transmissions. These are not splatter cartoons. These are smoky, doomy, deathrock-riddled opuses that sound like they’re designed to reach other spiritual realms, achieve a greater understanding of the universe, and unleash darkness that most other bands can’t even comprehend. The music is recorded in a lo-fi-style manner to give it that raw, cuts-to-the-bone feel, and V’s and MAL’s haunting vocals swirl around you like a ghost trying to draw your essence out of you and toward them. It’s intoxicating and entrancing listening to these songs, and don’t be surprised if you get caught up in what this band is doing and all of a sudden find yourself at the end of the record, confused as to what just happened. That’s happened to me multiple times with “Three & Seven.”

“The Sea of Snakes,” the mangling opening cut, hits you with some classic metal, doom, and even a little swirling black metal (think more of the French contribution to the genre), as the album just gets started mesmerizing and enrapturing you. “The One Who Sleeps” lets organs rise up and reminds me of a meeting of the minds between Black Sabbath and Sabbath Assembly. “Shroud of Sorrows” is eerie and spacious, but the song does a weird gear switch in the middle where the pace quickens, the fires are stoked, and the song’s ultimate purpose of possession begins to sink in. Also, the entire band gets in on vocals, making the thing feel like a black devotional. “Dreamland in Flames,” “Living Portrait,” and “Double Walker” delve into watery, airy deathrock, sparking thoughts of Christian Death and current maulers Atriarch. Both songs bubble with energy and stand apart from the rest of the collection, bringing Gothic-style melodies and beauty into play. The closing title cut may take you by surprise considering it blasts open, stays heavy and fast, and rips a gigantic hole in the side of the thing, but once you get to this point, you shouldn’t be that shocked. Every song on here has its own personality and mission, and the band never repeats itself. “Three & Seven” is fresh throughout its running time, and that’s another giant checkmark in the win column for Occultation.

I could go on and on with comparisons (Dead Can Dance, early The Cure, Witch Mountain), and I easily could fill another full entry with thoughts on this album. That’s how actively I have been thinking about this thing, and it’s a sure sign that the record will stay with me for the foreseeable future. I could sit in the corner of a room with this and let my mind go with it. Yes, it can feel scary and make me feel vulnerable, but that’s always a sign that you’re digesting something real. I’ll take that any day over a hyped-up shock-rock flavor of the week with no substance, because when the money dries up, it’ll go away. Bands like Occultation won’t, and their spirit will only endure.

To buy the album in Europe, go here: http://invictusproductions.net/shop/product_info.php?products_id=2792

For more on the label, go here: http://www.profoundlorerecords.com//index.php