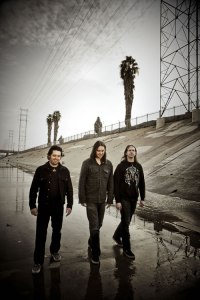 Metal has its share of bizarre concept albums. Queensrÿche’s “Operation: Mindcrime” is a classic example, as is Iron Maiden’s mythological tale “Seventh Son of a Seventh Son.” You have Mastodon’s classic “Leviathan” and not-as-classic “Crack the Skye.” You have King Diamond’s “Abigail” and … just about every one of his other albums. Basically, there are a lot of tales that have been told in metal history, and most of them are pretty wacky.

But no matter how hard a concept may be to wrap your brain around, perhaps you haven’t seen and heard anything yet until you tackle the new album from High on Fire called “De Vermis Mysteriis.” This one’s hard to grasp conceptually. Musically, no problem at all. The Kurt Ballou-produced demolition created by HoF crushers vocalist/guitarist Matt Pike, bassist Jeff Katz, and drum god Des Kensel is massive and thoroughly satisfying, one of their most crushing effort since 2005’s “Blessed Black Wings.” The story? I hate to do this because it feels lazy to me, but here’s what Pike had to say about the record’s storyline. Pay attention now because he refuses to reiterate beyond this initial telling.

The album’s title (translation: The Mysteries of the Worm) is a nod to a fictional grimoire conceived by the late, great Psycho author Robert Blochin and later incorporated into horror master H.P. Lovecraft’s renowned Cthulu Mythos. “It’s a concept record, a little bit,” Pike offers. “I got this idea about Jesus Christ and the Immaculate Conception: What if Jesus had a twin who died at birth to give Jesus his life? And then what if the twin became a time traveler right then? He lives his life only going forward until he finds this scroll from an ancient Chinese alchemist who derived a serum out of the black lotus—which is actually in Robert E. Howard’s Conan stories—and then he starts traveling back in time. He can see the past through his ancestors’ eyes, but his enemies can kill him if they kill the ancestor that he’s seeing through at the time. Basically, he keeps waking up in other people’s bodies at bad times. It’s kinda like that old TV show Quantum Leap. Kurt actually pointed that out to me after I told him the idea. But whatever—time travel is a killer concept.”

You got all that? It’s pretty out there, and considering the band’s notoriety at participating in and inspiring bong-related activities, an 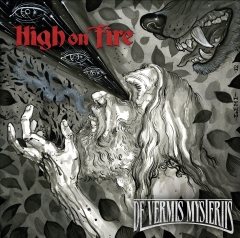 idea like this surely had to have been a product of a cloud of smoke. So follow along the best you can on this journey, and as strange, mystifying, scary, and trippy as it all may seem, as noted, the music will get you there. Lots of people complained about the production value of 2010’s “Snakes for the Divine,” namely how Kensel’s drums were treated, but it only takes the first few seconds of this seventh High on Fire album to let you know the skins are going to get the shit pounded out of them, and you’ll hear every strike. This is the heaviest, beastliest album from the band yet, and they sound downright ferocious telling this story.

So yeah, opener “Serums of Liao” just explodes, with a trudging assault that sounds like Motorhead poking a wasp nest. That leads to the earth-quaking “Bloody Knuckle” and its Slayer-like thrash approach that gets just a little bit of swagger to go along with it. “Fertile Green” also gets a blistering lead-in by Kensel, so if the point hadn’t been made yet that this is a record for drum fetishists, then this will make that loud and bloody clear. “Madness of an Architect” changes up the tempo a little bit, with some drone and more of a stoner gallop like Pike’s earlier days with Sleep (oh, “Dopesmoker” reissue, coming soon). The song also gets Southern-style treatment and even more doom piled on top for good measure. “Spiritual Rites” is as aggressive and speedy as High on Fire ever have played, and the title track is burly and a bit more basic. “King of Days” is absolutely pulverizing but also feels a lot different from what we come to expect from this band. There’s more of a mid-tempo, and at times vintage Metallica aura to it, and it has some of Pike’s gutsiest vocals. Oh, and a bones-to-dust outro from Kensel, your album MVP. The one song that may cause your head to tilt a bit is raw, stripped-back closer “Warhorn,” where Pike’s gurgling, mucous-smeared vocals take center stage and are as naked as ever. It sounds weird at first, but that’s because you’re used to hearing him howl over teeth-shattering decibels. So let yourself adjust, and you won’t be sorry.

High on Fire is one of metal’s loudest, sweatiest, meanest, nastiest bands, and their output has been nothing short of consistent. Now they can add “intellectually challenging” to their resume with this new album. It’s an astonishing listen, one that sounds best on the highest volume you can achieve. This a platter that only should solidify, if not swell, the band’s following.

For more on the band, go here: http://highonfire.net/

For more on the label, go here: http://www.eonemetal.com/