You’ve heard the saying “jack of all trades, master on none”? Well, that saying doesn’t apply to Jenks Miller, who has proved again and again no matter what he touches, it seems to turn to gold.

Have you heard his country-and-folk-fed Mount Moriah, a band in which he plays guitar and teams with the awesome Heather McEntire to deliver heart-crushing, sobering tales? The band is flat out incredible. Then there’s Horseback, the metallic hybrid project he’s headed for several years now, where he always seems to come up with something genuine and inventive. Over the course of several releases, Miller, as the primary visionary, always found ways to tread new paths and keep his perspective fresh.  That carries over to “Half Blood,” Horseback’s new full-length effort and the first initial-ruin release Miller has offered up for Relapse, who have put out versions of “The Invisible Mountain” and combo effort “The Gorgon Tongue: Impale Golden Horn + Forbidden Planet.” 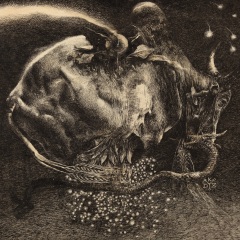 Under the Horseback moniker, Miller has gone through many metamorphoses. There have been trips to black metal, doom, ambient drone, and many other sounds that have made the project’s sounds richer as it has matured. “Half Blood” has many of those elements as well, but they sound more refined and channeled through a Southern and Midwestern filter. The bio materials for the record describe a meeting of the minds between Neurosis and Neil Young, and that’s a damn fine assessment. People who dig Across Tundras and other Neurot acts also will find much value in this seven-track record, and I find it to be the most satisfying piece in the entire Horseback canon. I’ve spent a ton of time with this record while proofreading, and it keeps my mind open and aware, stimulated and charged.

The album basically works as two halves. The first segment is made up of four tracks that certainly stand on their own but work great in tandem. The second portion is a three-part section called “Hallucigenia” that pushes your mind to the limit and makes you imagine shapes and colors much in the same way long passages from bands such as Sleep and Electric Wizard can do. I found myself getting lost in this section, and when the music expired and my iPod light came back on, I was typically stunned that I was so engrossed I didn’t realize the journey was over. That worked especially well yesterday, for example, when I sat 32 floors above town and soaked in the record amid fog and a driving rain storm.

We open with “Mithras,” a psyche-washed, somewhat bluesy opener that trickles along in a calculating manner, as Miller growls over top. “Ahriman,” a name that appears drawn out of Zoroastrianism, buzzes and simmers, with an Americana glaze and some of the more direct singing on the entire effort. “Inheritance (The Changeling)” is the most surprising track here, as it opens with weird laser shots (like early M.I.A., before she made an ass of herself), crashes, watery percussion, and rising organs. Guitars eventually squeak and hiss, noise floods threateningly, but then the whole thing dissolves into calm keys and acoustics. “Arjuna,” seemingly named after a warrior in a Hindu epic who was a great archer, also has a Southern feel, dusty, creaky vocals, and eventually some raw singing that seems totally foreign to what’s going on, which, of course, means it works perfectly.

That moves us onto the “Hallucigenia” triptych, which begins with the dream-state sequence “Hermetic Gifts,” a song so tranquil and serene that when Miller’s growls kick in, it’s like having Gollum threaten you during a trance. “Spiritual Junk” is built on organs and drums, keeping to a mid-tempo pace that sets the stage for the 12-minute closing segment “The Emerald Tablet.” This track reveals the whole album’s true primordial substance, and it brings all of its parts together for an amazing crescendo. The psychedelic ooze bubbles, the tumultuous sections bring the vision into focus, and the life forces captured in this song seem like they break through an imaginary barrier and out into the world. I know that sounds a little ridiculous, but listen to it and see if you understand what I mean.

Miller is one of the most gifted and imaginative musicians in any genre, and Horseback never fails to keep me invested. “Half Blood” is a ridiculously rewarding experience and already a candidate for best-of-the-year honors.  I’m excited to have it in my music arsenal, and I don’t imagine it’s going to take a back seat to anything else anytime soon.

For more on the band, go here: http://www.facebook.com/Horseback