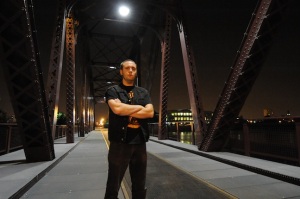 I got into metal for the sound, but I stayed for the adventures. The first time my pre-teen ears heard things such as Judas Priest, Black Sabbath, Dio, and classic solo Ozzy, I was captivated and instantly wanted to know more about what I was hearing. The fact that the school I attended warned me repeatedly of the evils of this music just made things all that more attractive while, and the same time, my Catholic guilt burned uncertainties into the back of my head. Being a kid sucks sometimes.

Anyway, from the first adventures I had with metal, I decided I was on the ride for life. I had people tell me I would outgrow it and once I matured and got into the working world, my tastes would change and mellow. The fuck were those people on about? If anything, the passion has grown stronger as every day passed, and part of what’s kept me so interested over the years are the incredible stories told by many of the bands I adore.

I love Iron Maiden not just for Steve Harris’ rollicking bass lines, Bruce Dickinson’s wails, and the dual-guitar assaults (does anyone think Janick Ger’s stuff is actually plugged in?), but for the tales they told and the pictures they created, be it historical, fictional, or a combination of the two. I loved Dio’s threads about good and evil, swords and sorcerers, and the ability to find power within yourself. A more recent example comes from Ireland’s Primordial and the bloody and chilling takes of their nation’s history. With so many metal bands, you’re not just getting music; you’re taking a trip somewhere and learning to escape your everyday life. It’s what we fans treasure and what outsiders often find hilarious about the genre.

That brings us to Dawnbringer, as classic a heavy metal band as you’re going to find these days with the always reliable Chris Black at the helm. You likely know Black from his collaborative work with Nachtmystium as well as his roles in bands such as Pharaoh, High Spirits, and Superchrist, all of which pay some homage to various forms of metal. His Dawnbringer project has been around for a while now, but it really didn’t come into crystal clear focus until 2010’s eye-opening “Nucleus,” their fourth record overall and first for Profound Lore. That album showed just what this band could be, namely a group that kept the genre’s true essence at its heart and expressed itself with exuberance and abandon most other groups would eschew. There was no tough-guy fakery or over-the-top evil attached to the music. Instead, you put on a Dawnbringer album and remembered what it is about metal that attracted you in the first place. Or at least that’s how I felt.

With the new record “Into the Lair of the Sun God,” everything they accomplished on “Nucleus” is taken to the next level. The playing is even more focused, the glory of the riff is amplified a million times, and the sense of adventure is at every turn. Before we go further, I’ll admit the lyrics can be a hindrance if you’re going to take this thing too seriously. There are more than a few cringe-worthy lines, and someone apt to make fun of metal is going to have a field day with this thing. But the same can be said for Dio and Maiden and, holy shit, have you heard any Helloween albums? That’s part of the charm, and while it does perhaps prevent the record from having appeal beyond metal’s circles, who cares? We don’t need those people anyway.

“Into the Lair of the Sun God” is a concept record, and the songs are merely titled “I” through “IX” almost like chapters, which they sort of are. There is a fantasy element to the tale of a driven warrior compelled to murder the sun and his misguided path and eventual plot to carry out his deed, but there are elements of the story that are easily relatable to real life. Who among us hasn’t gotten completely overcome with an idea and filled ourselves with gusto to carry out some mission, with total blinders on as to how difficult and/or impossible the goal may be? On a more primitive and, uh, stupid level, how about those faux tough guys who think they can take anyone, only to challenge an MMA fighter and get completely beaten into the ground? Some people have the spirit of the warrior, but not the tools. That theme is prevalent on this record, and it’s a pretty important lesson for us all.

The nine cuts on the record act like a set of stairs, almost like the one the warrior character takes on his way to confront the sun. “I” sets the stage and lets the listeners experience the first thoughts the protagonist has about his mission, his bravado, and the sun’s dismissal of his mission, reminding him he’s just a mere moral. Undaunted, he concludes, “I am the one to murder the sun.” “II” is fast, played furiously, and has some glorious lead guitar work that puts every modern power metal unit to shame. “III” hits a full gallop and visions of the hero’s eventual demise, and the song closes with a feedback string that sounds like a flatline. “IV” puts in a fight that would make early Maiden more than proud of what Dawnbringer accomplish on this cut, and then things get unexpectedly ambitious.

“V” is a tried-and-true power ballad, with some of Black’s most passionate singing yet. It’s a grandiose statement, one that rivals some of Queen’s most bombastic work, and it’s a mind-blowing display that’s unlike anything any other metal band would dare attempt. “VI” hits on prog rock, with big organs and warnings that the hero’s failure means ultimate demise; “VIII” is crunchy, thrashy piece and is the stage of our great battle, where the hero has an unexpected revelation; while closer “IX” wraps the tale, leaving the warrior’s body at the bottom of the sea after his foolish mission is snuffed.

“Into the Lair of the Sun God” is a very different record based on modern metal standards, but had this come out in the 1980s, it very well could be remembered as a genre classic. That’s not to suggest that still can’t happen for this album, as it’s one of the most passionately, phenomenally played metal records out there. This album deserves to be heard by anyone who claims a love for heavy metal’s heritage, who loves a great tragedy, and who can get carried away by musical brilliance. All of those elements are here, and this could be Dawnbringer’s hour to become one of metal’s brightest celestial bodies.

For more on the band, go here: http://www.facebook.com/deathofhunger