If you see the band name The Sabbathian with no details or history of the people involved, what would you immediately think? Abject devotion and worship of the heavy metal godfathers Black Sabbath? That would be a great guess, and way to go on that, but you’d only partially be correct. There’s actually a lot more involved, as you’ll find when visiting their debut record “Latum Alterum.”

The duo that comprises this band will be no strangers to most people. Vocalist Anette Uvaas Gulbrandsen worked with notable bands such as Nàttsòl and Mandylion, while multi-instrumentalist Chad Davis has been a part of groups including Hour of 13, Mountain of Judgement, the Ritualist and plenty more, and their creative union here started in 2012, with their first offering coming two years later on the “Ritual Rites” EP. But that’s all we got from the band as far as recorded content is concerned until their first full-length “Latum Alterum,” which is being released by Svart Records. Back to that sound you may have anticipated. Sure, there are nods to Sabbath on this record for certain. But their genuflection before doom goes far beyond that as they explore all kinds of textures and atmospheres, never holding themselves back from stretching their muscles but always staying true to the doom spirit. This seven-track, nearly 45-minute record is packed with gloomy spirit and dark majesty, while the themes of the songs revolve around the passing over of one’s soul to the other side, hence the title of “Latum Alterum” that translates to “on the other side.” The record is a journey that will take you there, but it also will keep your emotions charging along the way. 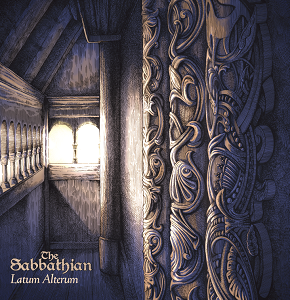 “Requiem … Intro” starts the album with the music floating magically and Gulbrandsen singing of “requiem eternal,” before everything moves into “The Brightest Light” that starts with gut-punch riffs and doom power. “I had to leave this world,” Gulbrandsen laments, as the song pushes into territory that reminds of fallen The Devil’s Blood, and the chorus takes off, with her calling, “All I leave behind, all because of you.” The track continues to haunt, while the guitars buzz, and the song has a crescendoing finish. “Liti Kjersti” has guitars barreling in, while the singing takes on an operatic vastness, later sweltering with dark undertones. The song later gets icy, with Gulbrandsen continuing to lead the mission into a mesmerizing gaze that swims in murk. “Head of a Traitor” begins as if in a dream state, with speaking fluttering, and the track later pushing open. “Are you with me?” Gulbrandsen wails, as riffs compound and twist, with the melodies stirring and striking. The singing reaches for the skies again, as an angelic fury spreads it wings, guitars swirl, and the track ends in a pool of sound.

“One Night of Cruelty” gets going with swaggering guitars that bring added attitude, with the singing feeling more abrasive, and the tempo bathing in filth. Gulbrandsen sings of the stench of rotting flesh, adding to the gore factor of the song, while the intensity is increased, and the guitar work chews. Then things get dreamier, as Gulbrandsen sings of “a place where daylight never enters,” before the song is swallowed by mystery. “Embrace the Dark” is the one track where the Sabbath influence is felt the most, especially in the guitars, while the singing snakes through the murk, and a bruising, yet simple chorus makes its mark. The riffs take off, with the singing pushing into the clouds, leaving odd echoes and eventually psyche-laced soloing that makes your head soak in the chaos. Closer “Evil Hvile/Libera Me …Outro” is immersed in riffs, as Gulbrandsen sings in her native tongue, as a humid feel coats your face with condensation. A mystical fog slowly rises, as the track is enshrouded in clouds, organs emerge, and Gulbrandsen’s voice leads us to the beyond, where life changes forever.

With doom’s borders constantly expanding, bands such as The Sabbathian that are both traditional and seeking to push their reach are going to help keep the sub-genre’s blood healthy. “Latum Alterum” is stirring and emotionally impactful, and you can’t help but feel like you’re transferring over to a new level of understanding along with their music. This is a wholly satisfying debut record pitting two of metal’s often unsung warriors here to prove the power contained within them.

For more on the band, go here: https://www.facebook.com/thesabbathianband