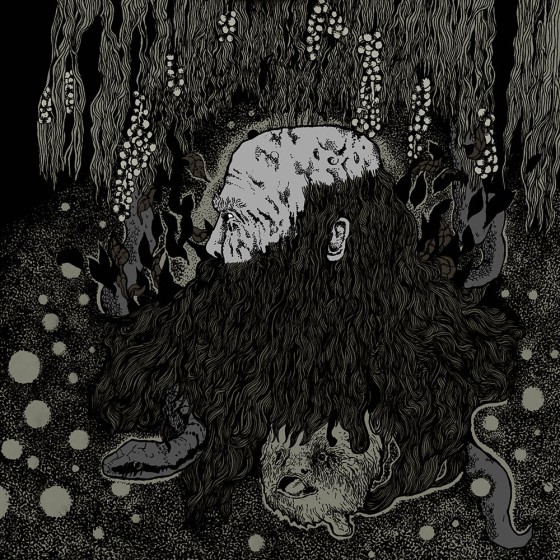 Two great forces that go great together might sound like a stupid candy tagline (or maybe even a lede I used before), but it totally works when it comes to discussing the brand new split effort from two of the world’s most bizarre, challenging outfits.

Both Palace of Worms and Botanist are one-man bands, weird ones that aren’t easy to get to know and feel comfortable in their respective presences. That’s one of the things that actually attracted me to each project initially, because I like to be challenged in my music listening, and these diametrically opposed groups offer that experience every single time. If you’re a regular reader of this site, no doubt you’ve heard me go on and on about each band, and having them represented in a new split release by way of The Flenser, the ideal home for both of these artists, seems only right.

Botanist’s mission has been well documented on this site, but if you’re new or in need of a refresher, then here goes. Botanist is a dulcimer-and-drum-style band led by Otrebor that focuses on The Botanist, a crazed man of science living in the Verdant Realm who has isolated himself from humanity and taken up living in the plant kingdom. Along with his leafy minions, he envisions and plans for the day when all of humanity is wiped out, and the plant kingdom can rule the earth again. That’s a rudimentary description, and I encourage you to check out Botanist’s site below for a fully comprehensive description of what’s going on and the various players in the Armageddon tale that has played out over his excellent four full-length records. It’ll keep you busy for hours.

Botanist’s portion of the split is called “EP 1: The Hanging Gardens of Hell,” and like a flower in full bloom, never has the music sounded this alive and full of color. Otrebor has managed to unearth great, full-seasoned melodies on these three cuts, and this project definitely has transcended black metal into something entirely its own. “Tillandsia” is the first cut, and immediately you can hear how the music has developed, as the dulcimer is active and full of light, and the music takes on more of a gothy feel than ever before. The cuts halts for some sad silence and solitary hammering toward the end before it opens back to swallow everything. “Senecio” has Azalea emerging again, acting as the whispery portions of the vocals as it gives messages to The Botanist. Elsewhere, the vocals are creaky and spooky, some clean singing emerges that is buried in coldness, and the conclusion provides some of the most intriguing compositional moments of Botanist’s run. “Trandescantia Pallida” has a wintry feel to it, with clean chants and more creaky growling, and while the track has more delicate moments than anything else on here, there’s just as much fog and mystery afoot, enrapturing you in a haze of violence and treachery. Something about it chills the bones and makes me wonder if we’re not on the cusp on something terrifying with Botanist’s next chapter. Needless to say, I can’t wait to hear what happens next and just how it ends up sounding.

Palace of Worms is the project manned by Balan, who handles all of the instruments as well as vocals, and this band long has been one of the most full-bodied, fleshed-out representatives of the one-man movement. The songs are huge and full of sound, and while it’s black metal at its base, there are many other elements going on as well that helps it achieve that “experimental” title. But the music is crushing and violent wholly, so it’s not like you’re going to feel like you’re lost in some lab somewhere while a mad scientist tries to figure shit out. He knows what’s going on, has delivered heaping helpings of devastation on his two full-lengths “The Forgotten” and “Lifting the Veil,” as well as his split with Mastery.

On this effort, Palace of Worms’ three-track segment is called “Ode to Joy,” no doubt a tongue-in-cheek title from a man so engrossed in dark arts and likely not a nod to Beethoven, though I could be totally wrong there. In fact, “Ode to Joy (Hurrah, the End Draws Nigh)” opens this bloody bastard, and his brand of melodic black metal twisted with morbid, sinister intent hits you like a clawhammer. There is a plenty of madness and furious blasts, yet with about two minutes remaining, the song rips over even further, with menacing growls and ill intent. “King Leech” has a murky, mysterious opening that gives way to brutal, chewy riffs that feel like a combo of thrash and death. Eventually the song kicks into a tasty, punk-driven section that lets the fists fly anew, and blistering soloing, weeping keys, and hellish melodies carry the song out into its final resting place. Closer “Twilight of the Idols (For R.B.)” has a mystical feel at first, almost as if it is trudging through the fog, but then the hammer drops and the true intent of this cut makes itself known. There is chunky riffing; bizarre, warped, effects-laden vocals; horrifying, strangling noise; and noises zapping all about as the track reaches its conclusion. Another breathtaking offering from Palace of Worms, a project that’s morphing and getting scarier by the day.

There probably are not two more fitting groups to put together on a split album than Palace of Worms and Botanist, so many cheers for all the forces responsible for bringing this one together. You get a nice sampling of what each artist does so well, if you’re new to both, or you get a deeper ride into their psyches if you’ve been with these bands all along. This is a great late-year gift that’s perfect for the rot and decay that inhabits this season, though if you’re Botanist, you probably see it as nature’s way or regenerating before it strikes back against humanity with fresh fists. Balan probably just sees it as a state that would more suit humankind itself.
For more on Botanist, go here: http://www.botanist.nu/

For more on Palace of Worms, go here: https://www.facebook.com/tattooedinworms