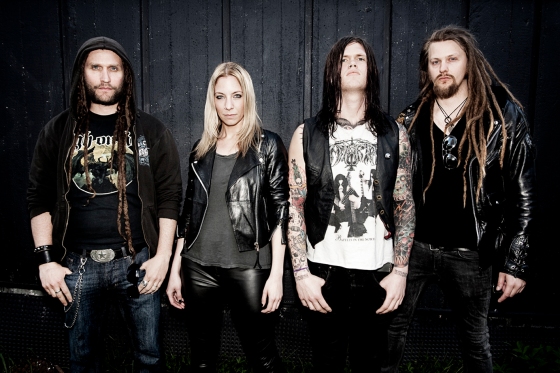 Messy and filthy, punishing and violent. Those are really good traits if you’re describing a relatively new metal band to an audience that might not yet be familiar with the artists, and since I’m doing that today, I’m pretty comfortable with those words as descriptors for Serpent Omega.

The Swedish sludge band has been in operation for only two years now, and before their debut, self-titled record dropped earlier this year, they had only a demo to their name. But for having such little time together as a band, they’re already making some impressive steps forward with this seven-track, 36-minute album released by Mordgrimm that is finally moving its way across the world and bringing the group’s fury to more and more people. There are some easy touch points if you want comparisons before digging into the band’s music, so think of the earlier years of both Kylesa and High on Fire so you can know what to expect philosophically. Or maybe quit screwing around and put this bastard on as loud as neighborhood decibel limits will allow and get with a band that’s just at the beginning of their campaign. 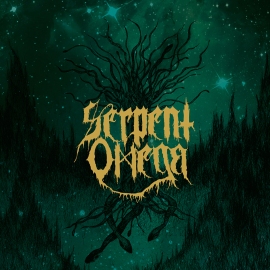 While the band heavily revels in sludge, they also mix in classic doom, black metal, and noise into their cauldron and are a true force to behold. In front of the band is Pia Högberg, whose vocals are menacing, forceful, and totally in command. Not to take anything away from her bandmates, but she is the primary reason you’re bound to be sucked into Serpent Omega, because she’s that impressive of a force, and she sounds as mean and powerful as anyone else in the genre. The rest of the lineup is rounded out by guitarist Andreas “Jonsson” Westholm, bassist Tomas “Brief” Westberg, and drummer Sakke Sexton, who bring the devastation and fiery charm to this killer debut record.

The album opens with unmistakable doom swagger with “Skullwand,” a vicious, unrelenting cut where Högberg’s voice is full of grit and menace as she drags you along through the dirt, kicking and screaming. Toward the end, she really lets loose, yelling and howling, while the band delves into blackness, with killer guitar work and near-blast beats. “Smoke Ritual” begins with ominous tones and slips into slow-driving murk that sets the mood. The music is melodic and catchy, but Högberg’s voice remains tough, and when the song really hits its stride, chugging guitars and smokey power take over and suffocate you. “Hammer” opens with some chilling chants before it launches into a volcanic rage, bringing back those High on Fire comparisons, but there also are some guitar parts that remind of the very early days of Soundgarden’s Kim Thayil. Högberg’s vocals reach a nasty shout, where you practically can imagine her pointing an accusatory finger in your face, and the final minutes of the song are so threatening, you might think death is near.

“Warmachine” is aptly titled, because the song sounds like it’s soundtracking a sword-wielding combine coming right at your face, ready to spill blood and destroy flesh. The song gallops and maims, while Högberg’s vocals reach a banshee shriek full of terror. “Red Sun” has a foggy, disorienting opening before it ignites into full-steam-ahead thrashing, with forceful shouts, gale-force-wind storming from the band, and a bloody, lava-filled explosion that again exposes the band’s raw power. “Serpent Omen” is the shortest song on the record, and it’s the one that feels a little too much like everything that came before it. The track’s not bad, but it doesn’t really stand out among the rest. Luckily the epic closer “Konflux” brings it all back together again, starting with static and tribal drumming, eventually slipping into a slow-driving tempo, and letting the leads slice inside and make their own trails. The song slowly builds the drama, letting the tempo swell organically, the scuzz to build up at the base, and the sludge hammer to begin swinging at full force again, pushing the song to its mauling, molten finish. What a way to slam an exclamation point at the end of their statement.

Serpent Omega are still an underground gem waiting to be fully discovered, and considering they’re just starting out, the thunder and chaos is bound to get more destructive from here. This debut is a promising, smoking slab of sludge that you should try to get your hands on so you can get in on the bottom floor of this band’s run. Serpent Omega have the power and fury to be a  major player in the underground metal world, and this album likely is just the first devastating shot before they deliver the knockout punch in the future.

For more on the band, go here: http://www.serpentomega.com/

For more on the label, go here: https://www.facebook.com/Mordgrimm