We haven’t done a Crossing Over column here for a while, and there are a couple of reasons for that. For one, I didn’t have anything for several weeks in that category–not really metal, but certainly with appeal to that audience–and because I’ve been writing a lot of those pieces in capsule form elsewhere. So I felt like I was having my say and didn’t want to repeat myself here.

Today we change that with the introduction of “A New Nature” by British post-punk band Esben and the Witch. OK, well, post-punk should be used very loosely these days, because what they accomplish on their third record, their best yet by a long shot, is branch out so much further than that. There definitely are heavy, volcanic moments here, and there are bursts of loudness that could match any metal band on the planet. Plus, it’s so richly melodic and engrossing, that is practically defies description. There’s doom, shoegaze, folk, and so much more. Crossing Over designation or not, this record deserve to be discussed on a metal site, and those out there with broad interests and eager ears are going to find one of the best damn records of the year. No hyperbole. I’ve listened to this album over and over (produced by Steve Albini, by the way), and I’ve loved Esben and the Witch from the get-go. But this is something special that stands out not only from the rest of their strong catalog but from the rock world in general. What a mighty, engrossing triumph this is. 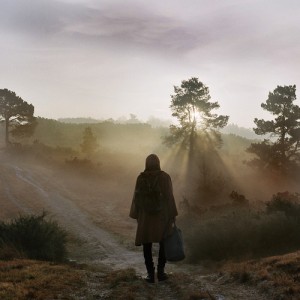 “A New Nature,” which might as well be the band’s motto for this record, is their first for own imprint Nostromo. Previously, the band released debut “Violet Cries” (2011) and last year’s “Wash the Sins Not Only the Face” on mighty indie label Matador, and truth be told, they’d still fit in just fine there. But going out on their own, throwing caution to the wind, and making their own adventure obviously was important to the band–vocalist/bassist Rachel Davies, guitarist Thomas Fisher, and drummer Daniel Copeman–and they excel and explode with blinding, glorious colors.

“Press Heavenwards” is a 10:16-long opener that is enthralling from beginning to end. It has a fairly serene beginning, which could make you think you’re in for a heavy dose of tranquility, but things change as the song develops. The track bursts open, thick basslines break through barriers, and gazey guitars meet up with hypnotic melodies. As the track builds, so does the intensity, and there’s a particularly gripping moment when Davies accentuates the word “spectacular” that signals the final burst before the song reaches its close. “Dig Your Fingers In” has a folky start, with quietly delivered vocals and a lovely backing, but like so much here, it turns volcanic in a hurry, with a great chorus that’s simply Davies repeating the song’s title in a way that really guts you. “No Dog” has a rumbling start, with charred riffs and dark drizzling sounds soaking the ground beneath their feet. Guitars wail, the singing is great and impassioned, and it’s a real boiler. “The Jungle” runs 14:33, and it’s the record’s centerpiece. It also happens to be one of the most brilliant songs in the band’s canon, one you should make a point to hear. The storyteller about a woman entering a forest for a search that turns cataclysmic but ends in her transformation, builds tremendously, with the first third of the song switching from trickling, stormy melodies into outright turbulence and power. Sinister guitar lines emerge as the fires keep raging, and that all settles into a solitary trumpet that takes over and signals the turning point in the song. From there, the song ramps back up again, insects chirp, the drama escalates toward its finale, and you probably will find you’re breathless on the floor when the whole thing is over. Just astounding.

“These Dreadful Hammers” has the unenviable task of following that epic, and the band finds a way to do it, starting with hushed a capella vocals and calm. When Davies calls, “Rejoice!” she’s met with devastating, sludgy guitars that are muddy and clobbering, rumbling that settles like a cloud of smoke, and mournful horns that cut through the murk. “Wooden Star” has a nocturnal-style start, as it feels like it’s going out into the night, and along with brushed drums and cold melodies, Davies sings, “I’m here, I’m wide awake.” From there, the song’s bubble bursts just a bit, though not too much, as the singing gets a bit more forceful, with Davies observing, “Safe from harm, under the watchful eye of a glowing sphere.” “Blood Teachings” runs 7:54, which only qualifies it as a mini epic on this record. A slinky melody slips into alluring mystery, lightly jazzy playing, and a tempo that feels like it could ignite at any moment. Of course, that time arrives, as the band starts playing faster and gaining steam, the main guitar riffs hooks you and keeps you close to the track’s heart, and the final moments of piercing energy send shrapnel and flame flying. Gentle closer “Bathed in Light” is a brief final curtain dressed with quiet playing, delicate vocals, and a soft finish almost as if to act as a pillow for your thunderous fall.

Esben and the Witch have their first bonafide masterpiece with “A New Nature,” and all music fans, metal or not, should make an effort to hear this record. The music is swelling and dramatic, the storytelling is dangerous and gripping, and all three of these gifted musicians put in the performances of their lives. This group already was a formidable one, but they’ve reached such great heights, it’s hard to think of another band of their ilk that’ll be able to reach them.

For more on the band, go here: http://esbenandthewitch.co.uk/

For more on the label, go here: https://www.facebook.com/NostromoRecords