I have a really poor time remembering my dreams, an issue that has plagued me my entire life. I can remember maybe a handful of lucid dreams over the course of my existence, and none really stand out as anything profound or out of the ordinary that it deserves repeating or analysis.

My wife wakes up and winds up remembering tons of things, and although she gets bad ones now and then, she seems to go on these journeys that I wish I could find myself taking each night. Naas Alcameth, one of the minds behind the brilliant black metal band Nightbringer, apparently takes that even further, claiming periods of vivid dreaming filled with voices and shadows from beyond this plane and seemingly experiencing something far different than just his mind telling him stories. With that in mind, Alcameth (along with drummer Ain) gave birth to his new project Akhlys (meaning a gateway upon gateways) so he can open up his horrific visions for the world to see and translate them into his dark, spellbinding black metal. The style can be considered kind of a relative to Nightbringer, but there are plenty of differences between the two. That’ll be clear with one listen. 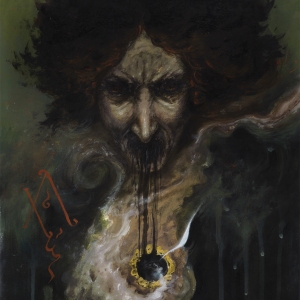 The project’s first piece of imagery is called “The Dreaming I” and is a five-track passageway to the beyond. It’s terrifying and surreal in a way words can’t really justify, and the only way to fully understand what’s at hand is to go into the portal yourself and see where the mind takes you. In fact, the information that accompanies the press details describe the tracks as five tunnels, and it really can’t be stated any better than that. You enter into each section, go into unlit territories you can’t see or predict, and see where you come out on the other side. It’s harrowing, but it’s a trip you’ll be happy you took, even if it scars you.

“Breath and Levitation” is the first curtain opened, and at 9:01, it’s a pretty grueling confrontation. It’s weird and mystical at the start, almost like the scene is unfurling before you, and then it tears open with swirling guitars and fits of madness. The vocals are vicious and full of anguish, with a storming feel permeating the atmosphere and a great crash that suddenly stops on a dime only to reopen into a savage, mystifying pace that rushes to the finish. “Tide of Oneiring Darkness” slips into a space haze, with winds whipping up and leading into gurgling growls and a calculated pace. The trip feels like a dark, rainy nightmare, complete with animalistic shrieks and blistering chaos. “Consummation” is the longest passage at 16:52, and it takes time to stretch out and breathe a bit. Clouds of sound settle over, threatening violence, and a few minutes later, that’s exactly what arrives. The guitars feel warped and deranged, like you’re seeing a scene in front of you a conscious version of yourself never could comprehend. The bulk of the track feels like a smothering, suffocating hell, with melody intertwined into the seas of blood, hypnotic blasts stymying you and keeping the eyes rolling into the back of your head, and an arresting closing sequence that sounds almost liturgical, in the darkest way possible.

“The Dreaming Eye” is no slouch either at 10:07, with the ill intent bubbling and simmering beneath the surface, threatening to break out and burn you. From out of the fog comes a dynamic explosion of power, with mean and tortured vocals mangling your nerve endings, a black assault raining down and making the path in front of you slick and muddy, and damaged playing aiming to see that mental harm has been done. The back end goes from dreamy and misty to psychologically harmful, sounding fearsome once again and eventually bleeding out. The closer “Into the Indigo Abyss” is an instrumental path that goes a tick over four minutes and is packed with misery-inducing ambiance. The music might make it feel like you’re losing the battle with your consciousness, and then you’re on a full-speed plummet right into the deepest caverns of hell, where you will remain forever. Or at least until you wake up.

Alcameth creates a strange, suffocating world on “The Dreaming I,” and considering dreaming seems to be an integral part of his existence, it’s easy to imagine this only being the first chapter in Akhlys’ excursions. This is a record that’s best suited for when you plan to leave the physical plane for whatever sleep or meditation brings you, when you’re most ready to confront the dark forces lurking in the rarely examined reaches of your mind.