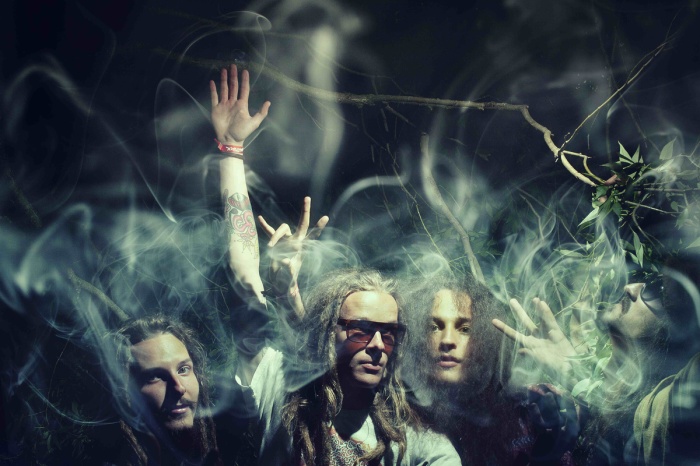 Apparently the universe had interesting things in mind when the music that cropped up over the past few weeks were set and determined for release. If you visit regularly, you know that we’ve been on about taking cosmic explorations with music and visiting planes we didn’t know existed, even if only in our minds.

Today, we get yet another dose of music that should have us exploring our inner selves and just where our imagination can take us. Domovoyd’s new hour-long, self-titled journey is one that requires you to strap into your seat and prepare to take a trip to terrain you’ve never seen before. No, you don’t need mind-altering substances to help get you there, though that certainly may enhance your time. Instead, just let the music wash over you, and you might find it’s the only brain-melting element you’ll need to get on Domovoyd’s level. But keep in mind, while these guys are immersed in exploring the psychedelic realms and self, there also is an element of destroying those realities as well as the world around us. It’s a dream with a curse.

The band itself has been searching the outer territories ever since the dawn of this decade, spending the past five years blowing minds not only with their latest opus, but also with their staggering debut “Oh Sensibility” that dropped in 2013. The Finnish group, comprised of vocalist/guitarist Oskar Tunderberg; guitarist Niko Lehdontie; bassist Dmitry Melet; and drummer Axel Solimeis, really pulls together for an equal parts dreamy and devastating collection on this six-cut, 59-minute effort. Yes, it requires your full commitment as it’s not meant to be digested in doses, but once you’re sucked in, you won’t want to drop in and drop out anyway.

The 16:59 “Domovoyage” starts the record, a rightful name for this one and a track that stretches out its legs in drone and racket before finally letting itself open fully. There is a psychedelic burning haze over this song, with the tempo drifting back and forth from trickling to terrifying, and inside it all, there’s a strange Pink Floyd vibe you can feel going on. Fitting, because as the song reaches its climax, Tunderberg croons, “See you on the dark side of the sun,” while the band hits a spacey high and leaves you utterly enthralled. “Ambrosian Perfume” is an oddly titled track, and it goes a sturdy 9:41, starting gritty and powerful. The singing is deep and bellowing, mixing in with the fuzzy heaviness and later evolving into guttural growls. The track is riffy and sticky, and the final minutes are dominated by electrifying guitar work that takes the track to its fiery finish. “Caustic Afterglow” sits in a pan of noise chaos and then catapults itself into the sky. A dry dialog crawls over the thing, delivering messages such as, “Face the fear, face the fall,” and it later begins to dissolve and gets washed away.

“Mystagogue” has a rough-and-tumble doom riff that gets things going, with strange nasal singing and parts that completely destroy. Harsh growls return again, seeming like they’re about to lacerate Tunderberg’s throat, with the punishment rolling out and steamrolling you to the ground. “Amor Fati” has rich psychedelic guitar work that gets into your blood, and then the whole thing bursts with a fury and pave the way for warbled singing and tastefully damaged melodies. This has more cosmic wonder sprinkled into it, with the final whispered words coming off like an incantation. As good as the previous songs are, the band leaves its best for last with the 17:48-long epic “Vivid Insanity.” The first nearly half of the song floats and lets the band tread in waves, with clean singing sounding nearly folkish at times, and the music making you think you can ease into the rest of the song. But then the earth quakes hard, a universe-ripping riff is unloaded, and the band delves into the heaviest section on the record, sometimes sounding like a more muscle-bound Ufomammut and unflinchingly delivering the goods. The song eventually winds into a sludgy mode, that’s no less heavy mind you, as you’re beaten repeatedly until it fades into the final minutes of calm sound and ambiance, letting you drift off into the night, bloodied but unbowed.

Returning to Earth once this is done might seem like a heavy proposition, but alas, it must be done. Still Domovoyd’s journey is a spacious, punishing one that’ll help you trance out but also bring you back to reality as harshly as possible. The band has an awesome formula down, and they seem to be gaining gravitational pull as they go along. Their second album is a crusher that you’ll want to use to help you get in touch with what’s inside of you, both the constructive and destructive elements.

For more on the band, go here: https://www.facebook.com/domovoyd