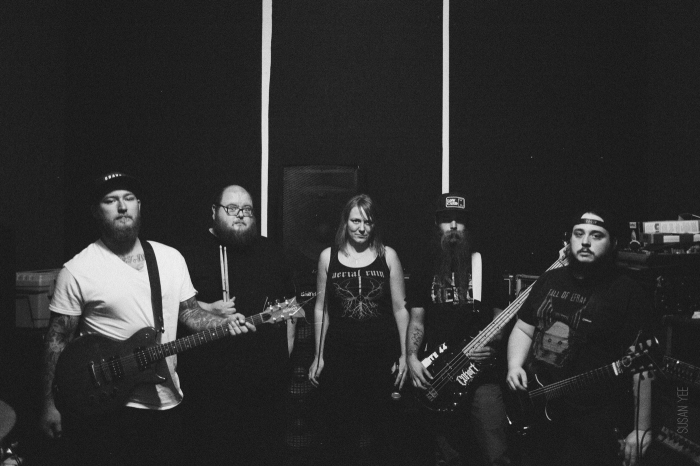 There are records that you need to hear to fully understand. Anyone can tell you how something sounds. Hell, we do that every day at this site, hoping to give you a glimpse into the music we are hearing. But hearing is believing and understanding, and the band we’re going to talk about today you must absorb in full.

A few months back, scribe friend of mine Chris Dahlberg (check out his rad site Cosmos Gaming) asked me if I heard this album “Unanswered Hymns” by doom crushers Chrch, and to that point, I hadn’t. So I got onto the Internet machine, discovered their Bandcamp site, and have been listening to their three-track debut with alarming regularity after legally downloading the thing. From the first listen, I was completely captivated by what I heard. There’s a lot of doom and atmospheric metal out there, and I like a whole ton of it, but not many bands put these elements together quite like Chrch. As noted in the opening, I’m going to try to give you a capsule view of this record, but you really should tackle it yourself. You won’t be sorry you did, and the music on here will catapult you into other worlds.

Chrch (they recently deleted the “u” from their name) only have been a band for about two years now, and already they have a full-bodied, enthralling style that, while doom at heart, should appeal to metal listeners of many styles. The Sacramento-based band formed in 2013 and have been crafting their honest, haunting sound ever since. The group consisting of otherworldly singer Eva, guitarists Chris and Shann, bassist Ben, and drummer Matt actually released “Unanswered Hymns” several months back, hence why it’s been there for the purchase on their Bandcamp (via digital or cassette), but the music now is being issued on vinyl by Battleground Records. While I haven’t heard it yet in that format, I would think the vinyl experience would be the optimal one for this record. This practically demands you stretch out, devote your mind, and take this amazing trip along with them.

This nearly 45-minute record begins with 19:16 opus “Dawning,” a track that swaggers open with a gritty riff and some dreamy singing that sets a mesmerizing ambiance. It might feel like you’re floating on air before the song hits sludgy terrain, with the vocals turning into ugly, gut-wrenching howls and the band leveling you before a huge gust of air sweeps back into the scene. The track slows down some, letting you have time to get your bearings, and then the sounds stretch and get even more spacious. Psychedelic colors begin to flood, while Eva’s singing echoes like it’s coming from the center of a dream. The guitars start to fire up again, as the volume builds, and with a few minutes remaining, everything bursts again. The band chugs heavily, the fury builds, and the singing transforms into vicious screams that smear you with terrifying visions. Amazing track.

“Stargazer” has a cold, frosty start before the sparks fly and Eva’s shrieks crush you. The track is slow-driving and full of anguish, as the music hits an emotional high, and the singing rises and stings your senses. As the track goes along, the elements get heavier and heavier, with doom fires raging, wild cries dashing into the night, and a punishing finish taking you from sky high to a face-first crash into gravel. Closer “Offering” wastes no time getting started, and it’s the most vicious cut on the album. Eva’s singing is powerful and emotional, as she cuts through sounds in some points and lets her words hover in others. The pace begins to smother you, with the band reaching into the depth of horror, the tempo hulking along, and a scary, hellish display taking shape. For as breathtaking and picturesque as Chrch’s music can be, this is where they show their bloody side, letting sounds sizzle, their playing penetrate your soul, and the final few minutes pulsating, simmering, and eventually bleeding out.

Those are a lot of words above, and I’m not sure they properly get the point across about this record. Chrch are one of the brighter stars in doom’s dark sky, and their “Unanswered Hymns” is an excellent debut record that makes their future pretty damn exciting. This is pulverizing, thought-provoking, intelligent, and well executed, and if you get your hands on the record, carve out time in your busy schedule to fully ingest their music into your bloodstream.

For more on the band, go here: https://www.facebook.com/chrchdoomca

For more on the label, go here: https://battlegroundrecords.bandcamp.com/