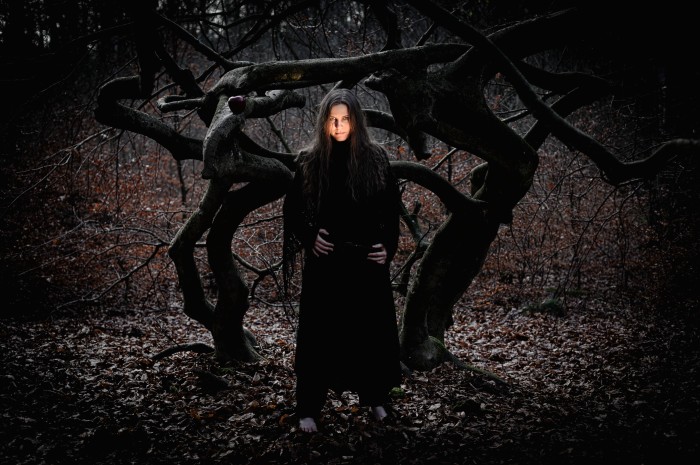 In the Biblical story of Adam and Eve, I always thought Eve kind of got the raw end of the deal. Millions of years after this tale was to have been set, it always seems like Eve is looked upon as the evil one, the person who brought about original sin simply because she listened to what a snake had to say. You know the rest: Adam and Eve eat the forbidden fruit, and then they are banished from paradise of Eden by God.

OK, so it’s part of the creation narrative and really never happened. But the symbolism is alive and well. We learn that Adam and Eve went on to have three children, and one of them kills the other, and all of that. But what if Eve instead had turned her vengeance on Eden for being seduced into eating from the tree and losing her freedom? What if she exacted the first example of a women standing up for herself and her actions and let the place burn? That’s what Dagny Susanne envisions on her new record under the Nachtlieder banner, “The Female of the Species.” Take a look at the album art, and you see Susanne taking on the role of Eve, and on these eight tracks, she lashes out at her loss of liberation and the central site of creation embraced by the Abrahamic religions. This is her way of giving Eve her power back.

Nachtlieder was created by Susanne in 2008, a raw, expressive black metal project packed with furious assaults and her grim, guttural growls and shrieks. Joined by Martrum on drums, this second record follows up on the thunderous promise shown on the project’s self-titled debut from 2013. Susanne shows prowess and power in buckets on this record, letting riffs rain down like black plasma and following that with her unearthly vocals that sound both full of anger and terrifying. Following along with her on these eight tracks, you can immerse yourself in the tale’s volcanic beginnings and take the journey all the way to the end when paradise is in flames.

“Malice, Come Closer” tears the lid off the album, with a heavy dose of crunch, riffs catapulting, and Susanne’s rough, gruff growls sobering you quickly. The track storms hard, with Martrum’s drumming blistering and the melodies overflowing. “Nightfall” follows with another strong dose of riffs spraying blackness, and the tempo moving quickly and aggressively. The wails are raspy as hell, while the fury is unleashed in blinding bursts, and a crunchy section emerges that brings more bruising and a hellish finish. “Fatale” lets the pace boil, with Susanne wailing out, the rhythms pounding, and the guitars spiraling and spilling. The tracks keeps progressing along a calculated path before it eventually fades away. “Lonely Mortal” gets volcanic right away, punishing and mauling, as some razor-sharp riffs cut through and darkness spreads. The track later bursts, allowing more punishment to take control and the finish to totally snarl.

“Eve” starts as a doomy march, with the tempo drubbing and welting and riffs rolling over the top. Wild cries tear open the track, with Susanne pouring an ocean full of emotion into the mix, and a cold melody line trickling behind the chaos. Suddenly the path halts and the song goes cold, but out of that comes raucous chugging that draws blood. “Silence and Devastation” is heavy and ugly, with the vocals eviscerating everything in sight and the pace hitting a hard gallop. The riffs are vicious, a violent end causes choking smoke, and then it’s into “Cimmerian Child.” There, guitars spiral away, with wild howls smearing and the music churning. The band heads into thrash and comes out showing off elegant melodies and a new burst of fire. The song pounds away and refuses any mercy, and then it’s on to the closing title cut that takes its time building a scene. Eventually it bursts, with speed and guttural force leading the way, and the guitars pouring down molten lava. The band hits all kinds of highs on this 8:24 crusher, from thrashy pockets to simmering black riffs to vocals designed to rip out hearts. The final moments hit a dangerous blast and smashes to the end, watching everything burn away.

Susanne’s work is dramatic, violent, and always compelling on “The Female of the Species.” You don’t need to invest in the story to recognize the powerful riffs and torrential vocals pounding down on you, but it sure helps to get a thorough understanding of this piece of work. This is a story to which many can relate: A misdeed followed by what we feel is an unjust punishment and a reputation we don’t deserve. Most of us have no choice but to take it. As for Eve on this record, she’s answering with flames.

For more on the band, go here: https://www.facebook.com/nachtlieder