Doing different things in metal and heavy music in general should be cause for excitement. It is for me, anyway, as there are a lot of bands out there doing the same or really similar things. But you know how the rest of this goes. While some folks embrace the music and appreciate artists taking different approaches, you have people whining like heavy music is being destroyed.

We have two bands today—one a veteran act constantly changing its stripes; the other a newer band getting a nice amount of attention—with new albums that you might not expect from the extreme music field. Feelings are bound to be mixed when approaching either one, just because conventional thinking locks people’s brains and feelings into impenetrable boxes. Those who don’t mind doing something a little off center might find two of the year’s more interesting, exciting records that could open up new worlds and ideas to you.

We start off with Kayo Dot, the long-running band helmed by the brilliant Toby Driver that has been twisted and contorting their own world over the past 13 years. It’s amazing it’s only been that long, because it feels like this band has decades’ worth of material and opuses to their credit, and over their run, they’ve changed so many times. None of their records are alike. “Blue Lambency Downward” and “Hubardo” sound nothing alike, for example. Same with “Gamma Knife” and “Coyote,” my favorite Kayo Dot album. And for their latest record “Plastic House on Base of Sky,” they’ve gone even further into the deep end, with a record built mostly by synthesizers of all shapes, sizes, and eras, and Driver’s surprisingly smooth, soulful singing. To be clear, this record, their eighth, is the least metal thing in their catalog. Instead, it’s an icy, futuristic, robotic dreamscape that’ll alter your mind, which should make up for any lack of head-bashing fury.

This cloudy transmission starts with “Amalie’s Theme” that’s built on heavy beds of murky synth, beats kicking around, and Driver’s breathy singing, which sounds different than it ever has. The song has a heavy haze that feels like a bizarre dream, and that blends into “All the Pain in All the Wide World” that sounds like early ’80s Rush at the start. A moody synth rock vibe travels through the song’s bloodstream, with Driver later struggling to communicate and to hear, lamenting, “You missed the point, you’re just not listening.” That could be a statement for anyone who can’t grasp this record. “Magnetism” is dark and has vivid strikes, with a nighttime feel flowing through the track and a hypnotic ambiance flooding the senses. Guitars enter the mix, with the beats getting more aggressive, sheets of synth storming down, and a massive, disorienting front stretching its muscles and eventually disappearing into a whir. “Rings of Earth” unfurls slowly, with a mesmerizing tempo, smooth singing that would soothe if they didn’t feel so alien, and an agitated finish that leaves welts. Closer “Brittle Urchin” is a sharp curveball, with a spacious, jazzy approach, beats striking, guitars churning, and Driver’s floating words jabbing, “I could never last.” Another unexpected turn from one hell of a great band.

For more on the band, go here: http://www.kayodot.net/

Astronoid seemed to blasted to earth out of nowhere, but truth be told, but they’re been around for a few years now, with a couple of EPs to their credit. They’ve grabbed a lot of attention the past couple weeks with the release of their excellent debut record “Air,” yet another landmark piece this year from Blood Music (maybe you’ve heard of their box sets?). This Boston-based band already is making people feel sour because of their—gasp!—melodies, hooks, and the fact that the high-pitched singing sounds like nothing what you’d expect from a metal band playing raucous, driving post-black metal. The best comparison I heard was if Mew played black metal, or, if you will, if Deafheaven had clean singing. Or if Cynic got nasty again. I find this band enthralling and refreshing, and as a person unabashedly unafraid of a good hook, I get lost in this shit easily. This is a damn good record, one that’s bound to gain added traction and life as more people hear it. 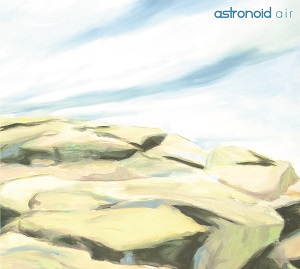 The record gets off to an inauspicious start, as “Incandescent” takes its time to stretch its wings, piling on layers of sound before the song gets amped up. Then, there’s a stunning one-two punch starting with “Up and Atom,” a helium-frenzied song that bursts with colors in the air, with the ridiculously high vocals over the chorus infecting you, and the rest of the track rumbling with a fury. It’s followed by “Resin,” a black metal-infused cut with a surging chorus packed with gigantic hooks, explosive melodies, and a level of hugeness not often displayed by bands in the extreme sector of music. “Violence” is dreary, with alien-like vocals, and it’s followed by “Homesick,” another huge one with a blistering chorus and moments that sound like Coheed and Cambria’s early work. You’ve heard this already about Astronoid, but they have a smothering, raucous time unleashing “Tin Foil Hats,” with a smashing chorus that was guitarist/vocalist Brett Boland wailing, “The clouds will part the sky, sun shines on my face!” It’s hardly grim. It’s damn-near jubilant. The title track is airy and dreamy, but it has its moments of serious grit. “Obsolete” has some awesome exploratory guitar work and pokes at comparisons to Cynic, while closer “Trail of Sulfur” is packed with passion and energy, as the song bursts gloriously, wrapping guitars surges and heavy breezes over Boland’s declaration, “All that we have, we leave behind.” This is a smashing, downright euphoric first album, and it’s damn sure to give you a head rush again and again.

For more on the band, go here: https://www.facebook.com/astronoidband/

For more on the label, go here: http://www.blood-music.com/

Kayo Dot is a band that has captivated me for years now, and I’m certainly not shocked by the radical shift into spacey trance that they unleash on “Plastic House on Base Sky.” As for Astronoid, they’re one of metal’s most exciting, albeit unconventional, new bands, and their possibilities seem limitless. I relish having two albums so radically different from each other and so much else of what’s going on out there, and the more artists we can have challenging the status quo, the better.