We like to do some weird mixing here when we’re overwhelmed with music and need to fit it all in some sort of logical space. So today, we’re going to mash together two bands that, on the surface, don’t seem to have much to do with each other. Maybe once we’re done, you’ll still feel that way. But I’m going to do my best to prove their music does fit within the same space or die trying. Or fail trying.

Doom creators Monolithe and spacey black metal titans Seedna would seem an odd pairing on a package tour. But taken back to back, as I’ve done multiple times with them, their music fits into an umbrella of imposing doom and strange creations. From there, each deviates into a different terrain entirely, but I keep coming back to how struck I was when absorbing each of their new records back to back. Both push boundaries, both have their own stories to tell, and both seem ideal captured on a dark, dreary day, season be damned, when you’re in need of something that feeds the darkest regions within you. But you don’t necessarily want to wallow. You want to push past that chaos into something that exists above and beyond, a place you may only be able to visit in your mind.

We’ll start with Monolithe and their new album “Zeta Reticuli.” If you’re familiar with the band, you know this is the second part of an adventure they started last year with “Epsilon Aurigae,” itself a landmark release for Monolithe as they deviated away from their epic, song-long records. “Zeta,” like “Epsilon,” is comprised of three tracks that all last exactly 15 minutes each. Their towering, smothering doom has opened up a great bit the past year, with more melody and atmosphere infused, and a more approachable ambiance created. It’s a nice change of pace for the band—Richard Loudin (vocals), Sylvain Bégot (guitars, keyboards, devices), Benoît Blin (guitars), Olivier Defives (bass), Thibault Faucher (drums)—as they reach into their future and determine which path they will take.

“Ecumenopolis” begins the record with noise floating into clean guitars, wrenching growls, and an eerie, gothic residue lingering. Synth spills into the piece as the tempo crushes in place, feeling like it’s pulling building walls down. Murk and fog enter as the guitars jolt hard, and the vocals wail away, conveying gut-wrenching feelings. Sorrowful soloing arrives as a storm cloud settles on the horizon, and that coverage pulls all the way to the end of the track, where the fury bleeds away. “TMA-1” (“Epsilon” included the cut “TMA-0”) largely is an instrumental piece that takes its name after the Tycho monolith from “2001: A Space Odyssey.” Fitting, eh? The song features a guest solo by Jari Lindholm (Enshine), and it feels like a proper homage to the source material. The song is misty and mysterious, with gloom and doom caked into the thing, warbled voices to chill your flesh, and later dialog from the film laced into the mix. Guitars start to change the mood, glimmering brightly before bringing the piece to a chugging finish. Closer “The Barren Depths” starts with blips before the thing is sliced open and the heaviness emerges. Guest singing from Guyom Pavesi (Devianz, the Copperfields) adds even more depth, as proggy waters are navigated, the doom elements feel like early ’90s glory era, and the track finds sooty highs and lows to hit before it comes to a trudging end. I like where Monolithe are headed on “Zeta Reticuli,” as well as its predecessor, and only exciting things surely are on their horizon.

For more on the band, go here: https://www.facebook.com/monolithedoom

For more on the label, go here: https://www.facebook.com/monolithedoom

Swedish black metal band Seedna, much like Monolithe in their sub-genre, stretch what’s possible from this kind of sound. Their third record “Forlorn” is one that’ll grab you right away. There’s so much going on with this record, such rich sounds that obliterate what you know as black metal, that you can’t help but pay maximum attention. There is heaviness and savagery for sure, but there also are helpings of weirdness, alien-style transmissions, and other shades one does not ordinarily expect from this area. It might make you feel strange. Having only formed a few years ago (2012 to be exact), the band already has three full-length offerings to their name (2013 debut “Tindalos” and 2015 follow-up “Sulphur” preceded their latest foray), all of which provide eye-opening experiences into this territory of music. Perhaps their fresh perspective comes from its members—Olle (vocals, ritual instruments), Gabriel and Max (guitars), Erik (bass), Johan (drums)—coming not just from metal bands but also from punk and noise projects before melding their powers here. Whatever it is, they sure hit a nerve over and over on these seven mysterious tracks. 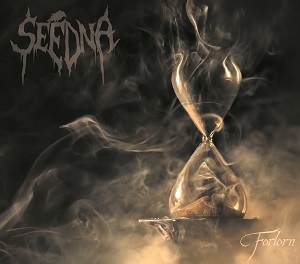 “Hourglass” is an instrumental opening, a brief introduction to Seedna’s world complete with ghostly dialog noting passage of time from “seconds to minutes turning into years,” and that fades out and heads toward mammoth 22:20-long “Wander.” The thing begins slow and dreary, but before long, we’re full bore into devastating howls and a slowly measured tempo that does its bruising over time. Whisper-filled growls tremble, as a long, mesmerizing stretch of gaze-inducing playing slowly trickles out and trips your mind. Suddenly, a furious bursts destroys any sense of serenity, as wrenching screams leave welts, and a pained aura sets in. The track suddenly goes silent, only to come out of the other side with sorrow-ridden guitars and gruff growls that drag you to the finish line. “Passage” is an interlude built on clean guitars and whispered dialog, and then it’s into “Frozen,” where the punishment is issued right away. “I want to scream, I want to escape, but legs won’t follow,” Olle cries with desperation, with the final moments going cold almost as if his soul has given out. “Eternal” has acoustic strums, with an echoey atmosphere, guitars gushing all over, and more hushed vocals. Later, the guitars drone heavily before ramping back up and flowing right into 11:29-long “Abyssus.” There, the doom is inescapable, with penetrating shrieks, a bone-melting pace, and wails of, “We are born to die, and that keeps us from living.” Doom smudge takes the back end of the song and leaves you an oil spot on the ground. Instrumental closer “O” lets you take back your breath, surrounding you in eerie guitars and solemn melodies. “Forlorn” is more black metal than doom, but one wouldn’t look out of place in a black mourning robe, wondering just where you’ll find the next day’s motivation.

For more on the band, go here: https://www.facebook.com/Seednaband

For more on the label, go here: http://tometal.com/

These two bands, while foreign from each other on the surface, are doing their part to stretch their respective sub-genres and increase what’s possible from those sounds. The fact they could be conjoined in a black tar puddle goes without saying, and the more I think of these two bands, the more I wonder what ever would happen if they found themselves bound together in the same creative space. Minds would melt, brains would explode, and metal might find itself on an even higher plane yet.