Most of what we cover here is adorned in decibolic heaviness, music that generally should terrify most of your neighbors if you were to play it out loud with the windows open on a wonderful, serene Sunday afternoon. I’ve never done that. But that doesn’t mean that music has to brutalize your hearing in order to make its impact and to have a healthy dose of weightiness.

Seattle’s Dust Moth is a perfect example of that and yet another band we’re covering this year that isn’t exactly metal but certainly can fit itself under the very ends of the umbrella. The band’s music isn’t raucous and brutal by any means. In fact, it often has the opposite effect, feeling atmospheric, psychedelic, and like something you’d want to ride on into the depth of outer space. But their buzzing haze is thick and tangible, while their mind-altering doom-gaze-pop can get inside your bloodstream and infect you upon impact. Given the power and magic behind their full-length debut “Scale,” if this band is given a chance, they should find themselves scraping in waves of followers intoxicated by the band’s sound and their own brand of heavy tidings. You don’t have to walk away with bruises in order to feel the jarring effects. 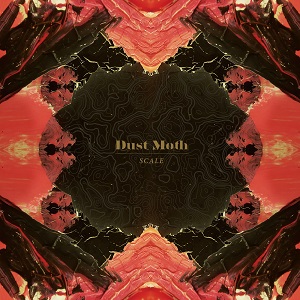 Dust Moth, in just a matter of a few years, have carved out small body of work (they released an EP “Dragon Mouth” as a six-piece), but a large personality to go along with it. One of the band’s main powers is singer Irene Barber (XVIII Eyes), whose vocals soothe and soar, scorn and scar, making me think a lot about Nina Persson’s work fronting the Cardigans. It’s a nice counter to the band’s sound, comprised of Barber’s swirling keys, guitar work from Ryan Frederiksen (These Arms Are Snakes, Narrows), the thick bass of Steve Becker (Giza), and Justin Rodda’s (also of Giza) pointed drumming, all of which form to create a sparking cloud of sound that envelops you and carries you off.

The record opens with the fittingly named “Space Legs,” a track that immediately sinks you into the psychedelic waters. Barber gently navigates you through the verses, with her bursting open on the chorus, and the band leading you into mesmerizing sequences that end in a cosmic vibe. “Corrections” has some weirdness in the front, with guitars beginning to scrape and Barber taunting and floating. The chorus opens up, with Barber calling, “We’re glowing in the dark, showing all our scars,” and every time it returns, it etches its way further into your brain. “Night Wave” pulls back, with cleaner guitars and moody singing, sounding like something that will feel ideal on cool evenings in early Autumn. Another strong chorus, wooshing keys, and the guitars jabbing makes it take on a cool nighttime vibe that completely takes over. “Lift” is the longest track at 7:44, with burly, fuzzy riffs, Barber’s voice hovering, and a numbing chorus. “When I fell hard for you, I fell instead,” Barber admits, as mechanical guitars churn, and the music bleeds out in a heavy haze.

“A Veil in Between” begins amid a roomful of banter, with the song blending in slowly, and icy keys pelting like sleet. There are psyche gashes, countered by Barber’s soothing vocals, with her asking, “Do you love me?” in a place that feels unsettling. From there, the band engages in a long murky jam that stretches all the way to the end. “Up Into Blackness” has blippy keys, guitars engaging, and dream-state singing that provides a sense of haunting wonder that pulls against the tide. Proggy bass spills in, with the music catching fire, the rhythm section throbbing, and the cut melting away. “Shelf Life” has ominous keys, with guitars igniting, and the music hitting a mind-warping high. “I will always chase the sun with nothing to lose,” Barber strikes, with the music swirling around her. “The Shape of Clouds” is a quick instrumental with sounds droning and noise wafting, and that leads into closer “Essex” that opens up like a drizzle from the start. Guitars soak the ground, with a chill setting in right as Barber wonders, “How high can you go?” over the smearing chorus. The final moments of this trip are comprised of guitars agitating, the music bubbling to the surface, and the track heading out into ghostly mist.

I’m really excited Dust Moth swooped into my stratosphere, as their debut “Scale” is a really strong, alluring record that, clichéd as it may sound, gets better with every listen. This band brings a fresh perspective and approach to heavier music, and their buzzing dreamscapes are very rewarding and impossible to shake. I’m curious to hear how the band progresses from here and the black holes they drag us into and out of through whatever music they make next.

For more on the band, go here: https://www.facebook.com/dustmothband

For more on the label, go here: http://www.mylenesheath.com/