It feels like we live in a brutalized, fractured society, at least here in America. I can’t really speak for the rest of the world, but going out in public, amid people with nary a filter, you practically can chew on the animosity and hatred toward others. People are growing more evil, and that isn’t a boulder easily stopped from raging down the hillside.

I’m not sure that even was something thought about when Morrow went about writing “Covenant of Teeth,” their cataclysmic new record, but it seems like you can run your fingers across those grains during the music. The album itself is a concept piece that imagines cultures on a future version of the Earth, one spawned following the destruction, be it physical, mental, or both, that humankind exacted on the world. The record follows the Norr, a group whose existence is comprised of the use of various languages and whose lives are formed from a mix of cultural experiences. It’s the way our world could be now, if more people had a modicum of understanding and weren’t so pig-headed about their worldview being the only one that should matter. In fact, on the record, you can hear various languages being used, tying together the concept and giving you a bigger glimpse into this future society. 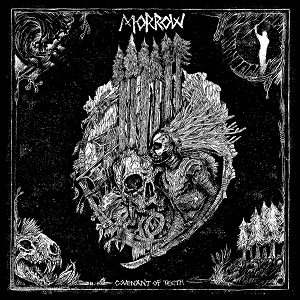 The band’s sound is hard to pin down, but Apocalyptic expression works pretty nicely. There are elements of doom, crust, hardcore, and so much more on here, and the way these songs build and come crashing down on you requires some deep breaths and a place to steady yourself. As for the band itself, it comprises member of bands as varied as Archivist, Light Bearer, and Carnist, with Alex on vocals, art, and narrative; David on guitar, bass, and drums; and Nicole on cello. Along with the main core come contributions from a whole slew of guests from bands including Anopheli, Wild Speaker, Monachus, the Nepalese Temple Ball, Knifedoutofexistence, and Masakari, not to mention the voice talent. You can feel the weight of all of those contributors in the best way possible, and this record is a mammoth made up of four lumbering cuts.

The album opens with the 11:44-long “Fathom,” a cut that starts with winds and cracking fires, footsteps cutting into the wilderness, and eventually gentle singing accompanied by pianos and lush strings. The piece then opens further, buzzing away and injecting a sense of morose doom, and then gazey melodies sweeping and carrying with them deep, wrenching growls. Muddy chugging joins the fray, as the song spills into melodic, yet gruff territory, with shrieks joining the guttural grunts, the track smothering with power, and the tempo easing up with cellos swelling and bleeding away. “The Norr” starts again with fires, with conversations swirling about, and then a gut-busting display rushing with strings crying and the dam being crushed by the flood. Husky growls spit out the plot, while wild cries join and add another element of chaos. Sounds conjure a heavy gaze, while the pace chugs, then takes on a violent assault, and the surging finish is hammered home with a howl of, “We are nothing but the iceberg!”

“Forgiving Grin” has a punchy rupture at the front end before it goes cold. The cello stretches out and hints at serenity, but that’s torn to shreds by the band mauling, and vicious shrieks mixing in with the growls. The song starts to stomp hard, leaning heavily into hardcore might, with the music feeling like it’s twisting your internal organs. A brief halt arrives, with additional speaking pushing in, and then it tears apart again and leads a ferocious stampede toward the finish. The 10:40-long closer “Cleaved Fang” trickles to a start, with each element slowly joining the mix until the bottom drops out unmercifully. The growls lacerate the senses, with gazey cascading soaking the ground, raspy wails cursing you, and another section of speaking settling in. Out of that, the cut thrashes wildly, with the blows being dealt in a calculated fashion, the atmosphere feeling emotionally overwhelming, and the song rumbling to its final destination.

Morrow’s vision into the future could be pretty accurate if our world keeps going the way it has the past decade or so. A dose of understanding and immersion into other people’s worlds could soothe a lot of what ails us, and that’s a point at which Morrow hit on “Covenant of Teeth.” Perhaps we don’t have to wait for the Norr to pick up our slack, and we can start patching together these gaping holes ourselves.

For more on the band, go here: https://www.facebook.com/morrowpunx/