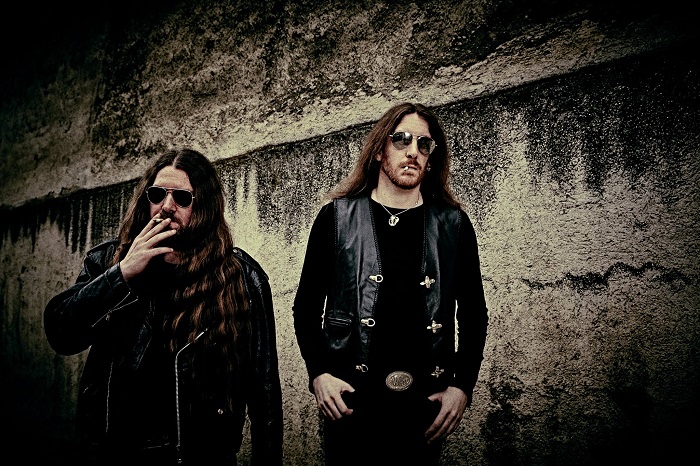 We’re still months away from the wintry assault that comes with winter, and it feels strange to be writing this with windows open, warm breezes relaxing, and the temperature in the 80s. But music is released when it is, so sometimes you get music to digest that doesn’t really click with the weather.

Nothing wrong with that, really, because eventually the snow will be here in sheets, and that might be the optimum period to heavily indulge in “Dis Manibvs,” the excellent new record from Imperium Dekadenz. Funny enough, the band’s 2013 record “Meadows of Nostalgia” made me think more of the spring thaw, when streams start flowing anew, and life is getting ready to bloom again. But on “Dis Manibvs,” the band is back to the terrain they trudged on 2010’s “Procella Vandens,” making gigantic, frosty black metal that could freeze your blood in the veins. This record feels like staring down a mountain you can’t conquer but trying to go for it anyway. It sends chilled oxygen down your throat and into your lungs, leaving you heaving and disoriented. And as much as this doesn’t fit the scenario, I’m going to be listening to this all week on the beach next week because it’s so damn epic. 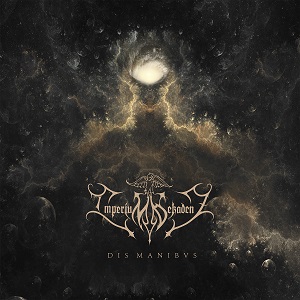 Imperium Dekadenz’s entrance into the world took place about 12 years ago, with guitarist, keyboardist, ands vocalist Horaz and guitarist, bassist, drummer, keyboard player Vespasian forming the core of the group (they expand to more members in a live setting). Their first record arrived two years later with “…und die Welt ward kalt und leer,” which they followed a year later with “Dammerung der Szenarian,” the power of which led them to Season of Mist, who released “Procella.” The German band always has had a knack for the dramatic, mixing their darkness with sweeping playing and elements that could transform your surroundings and make you feel like you’re knee deep in snow. Even in August.

The record begins with instrumental “In Todesbanden” that has acoustics flooding in, guitars starting to charge, and a moody atmosphere that blends into “Only Fragments of Light.” There, the melodic onslaught begins, with throaty growls adding thorns, and the cut entering into total spaciousness. Folkish choral chants arrive, guitars wail, and the track fades into the night. “Still I Rise” has an infectious energy, pushing hard, with a great chorus to boot. Everything here positively swells, releasing a sweeping chasm of sound, riffs churning, and the song disappearing into angelic choral singing. The title track has a dark, smoldering start before giving way to an incredibly emotional caterwaul. “All of these memories will never fade,” Horaz howls, as sadness spirals, dwelling on great loss and life experiences that change you forever. The track is heavy and heartfelt, and it’s one of the shining moment on this record. “Pantheon Spells” is another quick cut, with organs swelling, whispers dizzying, and a spacy eeriness making its presence felt.

“Vae Victis” storms open, with speedier playing leading the way and the growling creakier and more monstrous than before. The guitars unload their assault, while the tempo causes bruises to surface, and the whole thing ends abruptly. “Volcano” is a crushing storyteller that coats everything in doomed sentiment. Choral parts are woven into the fabric and increase the tension, while the verses rage with color, causing everything to crumble into decay. “The great snow falls!” Horaz yells, with the riffs overwhelming, bringing everything with it and its tornadic chaos. “Somnia” is the final of three interludes, this one containing acoustic guitars rumbling and angelic singing making the cut feel otherworldly. “Pure Nocturnal Rome” begins calmly before energetic riffs explode and a thunderous pace gets under way. Again, there is a great dose of emotion injected into the song, with growls piercing and the thunderous madness eventually disappearing into a fog. Closer “Seikilos” starts in a sound woosh, with strings plucked before the cut completely tears open. An awesome, classic metal-style riff runs roughshod, with folk-laced chanting of, “Death is certain, life is not,” looping its way through the entire track. In the final moments, the atmosphere begins to settle while soundscapes blend in and New Age-style guitars push to the finish.

Imperium Dekadenz’s impressive run cannot be denied, and “Dis Manibvs” is another great record from this blistering duo. They play huge, cinematic black metal that, while heavy, isn’t bogged down in brutality. Their icy world is massive and foreboding, and it’ll help nearly freeze your bones.

For more on the band, go here: https://www.facebook.com/ImperiumDekadenz