We all have those bands we like enough to do a pilgrimage to see live. In Pittsburgh, we get a lot of good shows, but many metal bands from overseas don’t always come here, preferring to hit bigger towns on their tours (which I get), so often we have to drive some miles to see these groups, which can be a fun and fulfilling experience.

Luckily, we’re close enough to Baltimore, so Maryland Deathfest is a destination we make just about every year. A few years ago, it was a necessary stop as the German black metal/doom warriors The Ruins of Beverast were making an appearance, and what were the chances of seeing them in my backyard? Actually, we came close last year, but their local date was canceled, as was their entire tour. But that MDF sojourn was so worth it, as they were a standout band, and were just unreal to witness. I already was a massive fan of the band, and they were touring on their great last record “Blood Vaults—The Blazing Gospel of Heinrich Kramer.” They were a nightmare even draped in midday sunlight, and each wave of terror lapped over the one before it, leaving the crowd in murk. 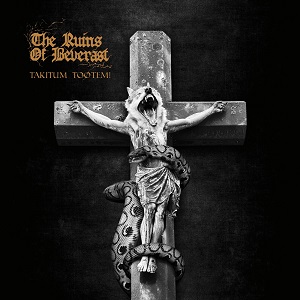 The band is back now with one of their strangest releases yet, and that’s saying something for a group that often pushes boundaries. “Takitum Tootem!” is a two-track EP that has some of The Ruins of Beverast’s most intriguing music. One track is the first of a two-part series lamenting the downfall of humankind’s loss of the crown of creation, with the second part set to be delivered later this year. It adds a whole new perspective to the band’s DNA, and it will be intriguing to see if that spreads to their future music as well. If so, we’re in for one hell of a weird adventure. The other track is a warped-as-fuck cover of a classic that’s been done before by other metal bands, but not even close to how Ruins do it.

The title cut opens, that being the first part of a bipartite meditation that begins with woodwinds, warped chants, and a strange essence spreading itself. Guitars kick up and create a strange noise halo, while washed-out growls crawl inside of you and light fires. A strange robotic voice begins to sprawl, adding some weirdness, and then the music temporarily fades before tribal drumming begins to bubble, and a grinding pace takes over. Hypnotic tones and alien voices take over, as the music spirals, sending you into a trace, and then things slowly fade, with a sting of sound hanging in the air. The final track is a cover of Pink Floyd’s “Set the Controls for the Heart of the Sun,” which is one of the oddest but most enthralling takes on the classic cut ever. It maintains the same mentality as “Takitum” by feeling like a spiritual expanse that literally takes you on that trip into the star. Strange vocal effects, synth that swims in and brings with it the cosmos, and mesmerizing drums highlight this piece, giving a dose of psychedelic oddity even its initial creator likely could not imagine. The song then bleeds out with the same types of chants that opened the title cut.

The Ruins of Beverast remain operating on a level most bands only could dream of attaining, and the weird “Takitum Tootem!” keeps their creative energies alive. I’m really intrigued to hear how part two is going to sound, which probably will be something I can’t even dream as I write this. Whether this is a brief stopover in a different world, or if this is how Ruins will operate going forward, these two songs are enough to keep our interest high and bubbling over.