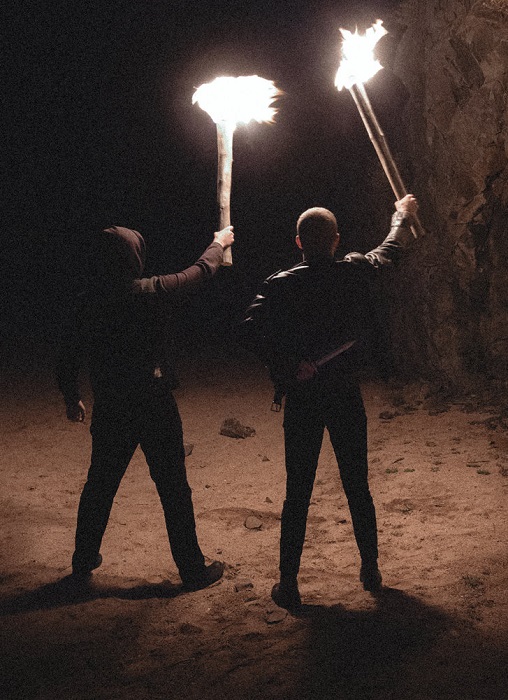 I am a really bad storyteller verbally, in that I veer off on tangents upon tangents upon loosely associated anecdotes to details that have almost nothing to do with the original point until I get back onto whatever it was I was talking about in the first place. Lots of bands seem to do that as well, not knowing when to edit themselves or realize when the point has been made.

I do not think black metal duo Vanum is one of those bands, but they apparently feel differently. Their debut record “Realm of Sacrifice” was one of our top 10 favorite albums of 2015, and its penetrating chaos is just as impactful now. Yet, the guys—K. Morgan (Ash Borer, Predatory Light) and M. Rekevics (Fell Voices, Vorde, Vilkacis)—seemed to think they could use a trim down, making their music into, in their words, “the sharpened point of Vanum.” We get that flesh-tearing motherfucker right in the gut over and over again on their killer new EP “Burning Arrow.” These are three tracks of slimmed down Vanum, though the songs still are fairly lengthy, with the shortest clocking in at 6:46. Aside from just making their assault more direct, they also play more with sounds, adding variety and texture to their atmospheric brand of black metal. The result is a volcanic, always interesting trio of cuts that hopefully set the pace for Vanum moving forward.

“Watched in the Eastern Sky” is the 8:58 opener, a pretty different style of track from what we found on Vanum’s debut. Noise rises and begins to spread its shadow before classic metal-style guitar tears open, giving the song a bit of a retro feel. Howled growls push the violence, while the track leans into atmospherics before getting smoking and deadly. The intensity continues to build, while melodies spill, and strong, murky weirdness flex their collective muscles. From there, another strange cloud of noise returns and swallows the track.

“Immortal Will” is thunderous as hell, with guitars sprawling and a poisonous fog rising. Strong melodies lap and maul the senses, as the assault pushes forward with wild howls of, “Born of fire, willed into being! Draw strength from chaos and rule as a god!” Feral shouts and charging guitars provide a massive dose of trudging black metal that has nothing but ill intent. Closer “Spring of Life” is the longest song at 9:06, with a shovel scraping and the track bursting to full punishment. The playing blisters and devastates, as growls and raw shrieks smother, and sharp guitar strikes tear open the skin. Hoarse cries and feral chaos meet, as the riffs spiral and build before going into a weird, mystical bend. The sound gets chillier from there before the nightmare bleeds out and fades into the void.

“Burning Arrow” is aptly named, as the music on here feels like a sharp projectile right to the heart, melting away your flesh. Vanum’s short run has been damn impressive already, and with this EP, it seems like they’re telling us they’ve only scratched the surface of their madness. This is a really great bridge to whatever mind-crushing thing they dream up next.

For more on the band, go here: https://www.facebook.com/realmofsacrifice