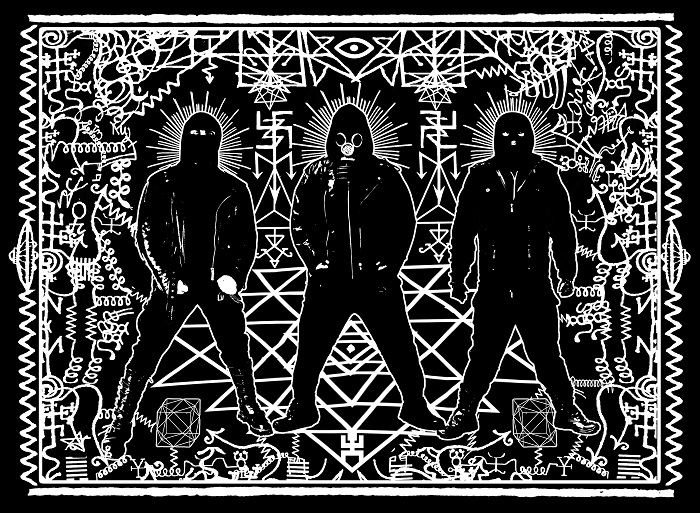 Metal is a loud, violent business by trade. It’s why we’re here for a lot of reasons, because we want music that’s loud, destructive, and in your face. That’s one of the reasons why metal has gotten darker and gnarlier as time has gone on, because everyone has tried to one up whatever they thought was the heaviest and most terrifying before them.

That being the case, black metal terror trio Tetragrammacide just might be upping the ante. This band, based in West Bengal, are indescribable in many ways. Their brand of audio horror is massive and impossible to penetrate. It’s heavily noise based and marred beyond recognition, and the music sounds like it’s coming from an inhuman force that has only devastation in mind. The band’s debut full-length “Primal Incinerators of Moral Matrix” finally is here after a series of smaller releases, and every ounce of this nine-track, nearly 39-minute album is hellbent on ripping flesh from the body. The architects of this madness—vocalist M.Opium, guitarist S(d)S(t), and drummer U. Eliminator—put together a ferocious record that has many elements of their Indian homeland packed into the songs but also take black metal to a new level of violence that wants nothing but blood.

“Hyper-Spatial Mandala of Intuitive Latencies” is a strange opening that’s packed with buzzing noises, weird speaking, and overall strangeness that spills right into “The Prognosticators of Trans-Yuggothian Meta-Reasoning.” Horrifying growls and a death hammer strike immediately bring chaos, while the guitars spit lines of fire. The pace is relentless, as the guitars char, the tempo defaces, and the song spills into a thrashy hellscape that leaves a dizzying end. “Radicalized Matrikavyeda Operation: Militarized Cosmogrids Destabilization (Heralding Absolute Contraction)” has guitars smothering, drums feeling like a death rattle, and the scene incinerated by the hellish playing. The growls destroy, as another voice emerges behind that, and the punishment rolls down the hill. The strength remains thick until the sound is swallowed in echoes. “Cyberserking Strategic Kalpa-Terminator (Advanced Acausality Increment Mechanism)” is jackhammering from the start, as the music boils, growls corrode, and everything in its path takes a tremendous beating. Disorienting riffs makes your head spin, while the vocals rush to the surface at the end.

“Transcranial Ka’abatronic Stimulation Collapse” is another quick interlude, as noise-scarred singing and weird noises sprawl toward “Intra-Dimensional Vessel of Were-Robotics, N-Logics and Assorted Lattice Intelligences” that’s jammed with gargantuan growls and an unforgiving pace. Guitars spiral and screech, while the tricky pace chugs hard, and the song tears itself apart as it crushes to the end. “Meontological Marga of Misanthropic Computation & Extensive Backwards Physics” has mechanical cries that reach into the void, and the pace mashes fingers. The track is total sensory decimation, as the guitars are mean and disorientngi, and the track comes to a stinging end. “Imperial Cyanide Voltigeurs (Quantum Threshold Leapers of Hatha-Sorcery)” has sounds swirling as the band begins mauling, and violent cries chew at bones. The guitars burn, while the song brings on the nausea, and the drums clobber everything in its path. More hellish growls team with scintillating lead work to bring the track to an infernal ending. Closer “Dismal Ramification of Metamathematical Marmas and Sandhi” is a final instrumental cut that brings together eerie racket, strangeness, and a glimpse into damnation you’d been trying to avoid.

Tetragrammacide’s forcefield of madness cannot be understated, and the music on “Primal Incinerators of Moral Matrix” could frighten even the brawniest, burliest of listeners. This is music that should be used to gain submission from people who cannot take the torture any longer and will give you whatever info you’re seeking. Or, on a less damaging means, this music should be used to frighten and put ungodly nightmares in the back of people’s minds.

For more on the band, go here: https://www.facebook.com/tetragrammacide/

For more on the label, go here: http://www.ironbonehead.de/