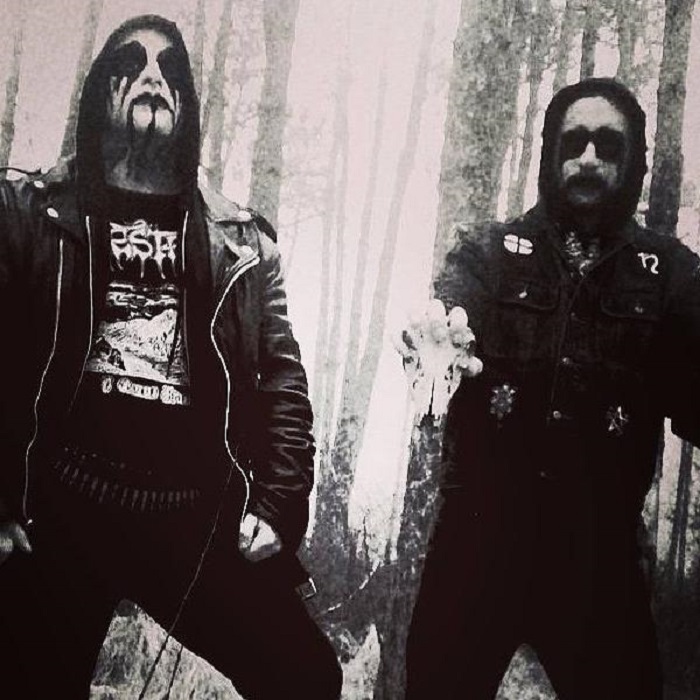 Not every record gets its just due when it is released. With the alarming volume of music that’s being unleashed in the metal realm, it’s only natural some will slip through the cracks for whatever reason (sometimes it’s because they deserve to fade out). So, it’s nice when something noteworthy gets a chance to breathe new life and find more followers.

Fólkvangr Records quickly has become one of our favorite labels over here, and they’ve been known to shine a new light on albums that are worthy and powerful but perhaps didn’t find the audience they should have. They’re at it again by offering cassette treatment to New Jersey-based black metal unit Mortum and their fine “Eheieh Chaos,” the band’s second record that was released last year independently. Put simply, this is a damn good record. There are riffs on top of riffs, and for as grim as it is, the melodies go on for days, making this as fun a listen as it is violent. These seven tracks that tear by in a little under 42 minutes likely will find their way into your dark soul and turn it into a pile of ash. The band—vocalist/guitarist/bassist Ominous and drummer Mystic Yautja—pour all of their intensity into these songs, their first full-length offering since 2011’s “The Rites of Depopulation,” and if this record is any indication as to where their heads are at, we’re just at the start of a bloody reign. 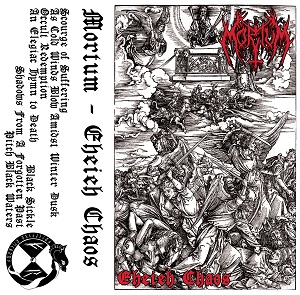 “Scourge of Suffering” opens with an eerie essence before guitars fire up, and creaky growls are unleashed. Some of those great melodies come rushing to the forefront, while the back end of the track is charred, spirited, and bloody. “As Cold Winds Blow Amidst Winter Dusk” is blistering, with savage growls that sound inhuman, and riffs that add to the power source. The track is thrashy and punishing, with everything ending in a colorful cloud of menace. “Occult Redemption” is storming and skull smashing from the start, with the vocals lurching and the riffs encircling. The band lands a ton more punches before everything comes to a shocking, abrupt end.

“An Elegiac Hymn to Death” is the second-longest song, registering 7:12, and it fades in from the night. The track starts slow-driving and hypnotic, as the growls mesmerize, and the music carves its way into the earth. Guitars surge, the pace picks up, and a grisly, violent explosion takes this song to its end. “Black Sickle” has riffs flooding the ground, and a hammering, melodic pace that really powers this thing. “Shadows From a Forgotten Past” starts with a wild cry and then a riff burst, as the growls destroy sanity, and the melodies surge. The track is strong and engaging, ending with a final blast before it fades away. “Pitch Black Waters” is your closer, a 7:58-long basher that has tremendous riffs and some different nuances. The vocals creak and burn, as the guitars well up and punish, and shit gets crazily emotional. The song spirals and sets blood charging, while the track fades into the strange night, and pastoral chants take its ghost to its final resting place.

If you’re new to Mortum and haven’t sunk your teeth into “Eheieh Chaos” just yet (and full disclosure, I hadn’t until this promo arrived), definitely check this out. This band is savage and melodic, and their black metal fury is not to be questioned. This is a storming effort that hopefully will find more lost and wandering souls.

For more on the band, go here: http://www.facebook.com/Mortumofficial

For more on the label, go here: http://www.folkvangrrecords.com/