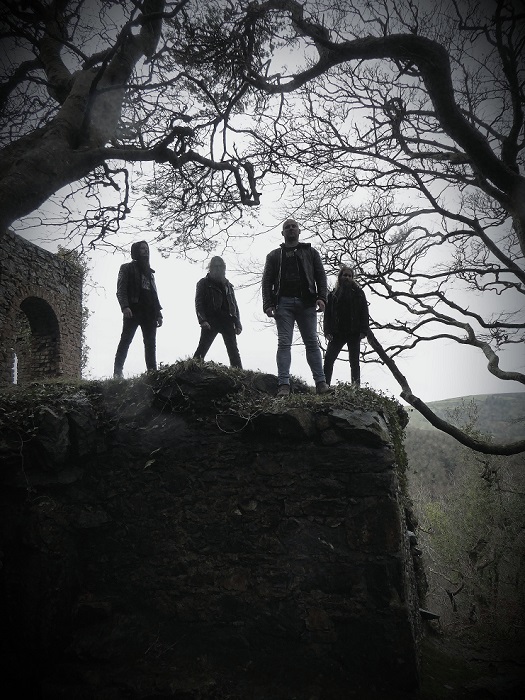 Autumn is not here yet, but its cold, deadly clutches are not far away. The time of the year when all nature meets decay and death is the ideal time for dark, heavy music, because it very much reflects the imminent absence of life that in the offing. These will be grim times.

So, it is fitting that the debut full-length from Irish black/death metal crushers Malthusian soon will be in our laps. “Across Deaths,” their five-track, nearly 41-minute first offering is a poisonous amalgamation of horrifying death metal and mind-warping black metal, put together in such a way where it creates a kind of beast we really haven’t seen before. It’s not that they’re rewriting the book on death and black metals, but they are doing their best to rewire the brains of both. Every moment of this record is harrowing and violent, pouring heinous power and ill intent into their music, which is the embodiment of mental duress. The band—vocalist/guitarist AC, vocalist/guitarist MB, bassist/vocalist PG, and drummer JK—lays waste from moment one, and over the next 40 minutes, the pummeling you take is thorough and mean, but it’s one you’ll find you enjoy. Not in that way! Perv.

“Remnant Fauna” is an infernal assault right off the bat, as savage pounding and warped growling enter into the tornado and create nausea. The drums splatter while the pace thickens, and eventually things get disorienting, like the room is spinning wildly. Multiple voices swirl together, as the pace decimates, and a savage beating spills out to the ending. “Across the Expanse of Nothing” has guitars firing up and the song being shoved into a blender, Portal style. It’s an ugly, menacing thing that keeps having layers of filth applied over top of it, nearly to the brink of suffocation. The pace stumbles into hell, with guitars cutting veins, wildness pouring out of every crevice, and a damaged aura gurgling on its last drops of blood “Sublunar Hex” sends shrapnel flying everywhere, with devastating growls, tricky riffs, and dizzying playing. Warped screams lash out, while the song continues to corrode and leaves behind trails of rust. The track then gets slurry and gritty, ending in a pit of chaos.

“Primal Attunement – The Gloom Epoch” is the longest track, clocking in at 12:57, and it is outright fucked up from the start. It begins sludgy and brutal, grinding through warped tunnels, with maniacal growling landing blows and black metal melodies raining down. The track turns into slow-driving, deliberately delivered death, as things are swallowed into a sarlacc-style pit, while the guitars begin chugging and producing smoke. The vocals sound like squeals delivered from deep inside a cavern, while deranged howls meet up with them and generate havoc. The band then enters into what sounds like freeform punishment, as strings strikes, and everything fades into darkness. Closing cut “Telluric Tongues (Roaring Into the Earth)” starts with drums disrupting the calm, punchy guitars drawing blood, and engorged growls belching out panic. The pace flattens as heavy death draws near, and guttural growls add ample bruising to the beating that’s long been under way. The band actually finds a way to be more damaging in the final minutes, with the last thing you hear being echoed screams that indicate the fate of all is not going to be pretty.

Malthusian’s debut has been highly anticipated ever since their 2013 demo and 2015 EP “Below the Hengiform,” and lucky for us, “Across Deaths” answers the bell over and over again. Its sick blend of death and black metals is treated with a warped sense of madness, and dark sickness forms from the air around it and spreads its vicious wings. This is a beast of a record, one that will go down as one of the more memorable debuts of a very rich 2018.

For more on the band, go here: https://www.facebook.com/malthusianDM