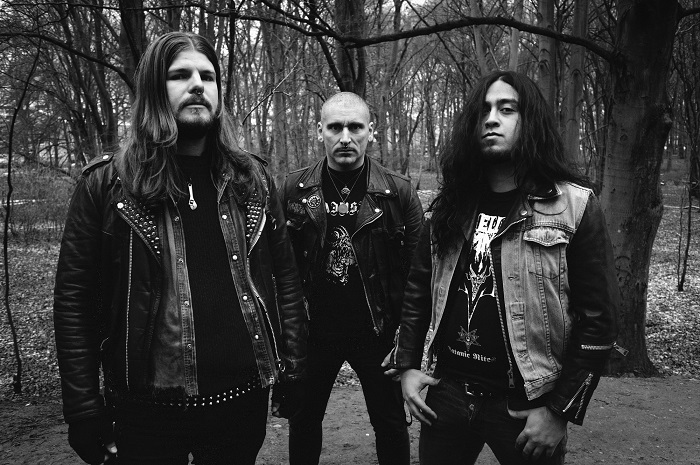 War sucks, but that hasn’t really stopped the metal world from grasping onto it and wringing it for every drop of inspiration. That makes a lot of sense. Metal is a destructive, fiery place, and recounting battles or imagining oneself in the midst of hell makes for pretty good content that never seems to run out of energy. As long as it remains escapism for most of us, right?

On the tails of bands such as Bolt Thrower, Hail of Bullets, Ares Kingdom, Asphyx, and others come Maligner, a Swedish entity releasing their first full-length effort “Attraction to Annihilation,” which is quite aptly titled. This eight-track, nearly 31-minute display is heavy, thrashing, and absolutely on fire. In just their third year of existence, Maligner already possess a deadly will and an ability to make ideal use of their, and your, time, as they waste nothing in their execution of the ideas. The band—bassist/vocalist Maligno, guitarist Aztiak, and drummer Ertheb Somus-Ra—throw you right into the heart of the battle, where you have no room to run or hide and must fight for your life or die. Metaphorically, at least.

The album kicks off with “Oath-bound,” a punchy helping of death that comes right for your throat with speed, menacing wails, and stomping, old-school savagery that should have even the most decrepit listener excited. The track ends in a blaze, running fittingly into “Lust for Fire” that trudges its way through the mud. Maligno howls about the stench of human flesh, while the guitar work reeks of early ’90s pain and damage, giving a wave of nostalgia as it flattens you. “Disposable” starts with crackling fires and the sound of a riot coming this way before soulful leads open and swallow you whole. “We are nothing but disposable!” Maligno cries, echoing similar sentiments as Metallica did 30-some years ago, with the track ending in fluid, razor-sharp guitar attack. “Salvation” thrashes heavily, with vicious growls, a pummeling pace, and a war-torn finish that brutalizes everything inside of you.

“Reign of Fear” has military-style drumming that rattles your head, and then the cork is ripped out, letting the assault spill all over. Maligno howls about “absolute domination” and the inevitable corruption of power, leading to a burst of calm, as rain and pianos wash everything away. “Beyond Repair” has thick bass, thrashy goodness, and then a neck-jerk shove into speed, as Maligno declares, “Whatever the cost, do what it takes!” Molten soloing takes it from there and leaves it in a pile of ash. “Mental Breakdown” sounds just like what its title promises, as it’s fast, punishing, and totally off the rails. Blinding soloing torches any chance of calm, as the track comes to a destructive end. Closer “Into Oblivion” has leads spiraling and the room spinning, as Maligno shouts, “Face the void!” as if you’re about to be dissolved into nothingness. It’s a similar story to what precedes it, as fast playing, strong soloing, and a crushing end deliver the final shots.

Maligner may only be on their first offering, but “Attraction to Annihilation” holds promise that this band could be one of death metal’s true powerhouses in the years to come. They’re never going to dry the well when it comes to subject matter, and as long as they remain this deadly, Maligner should keep getting sharper and stronger.

For more on the band, go here: https://www.facebook.com/malignerband