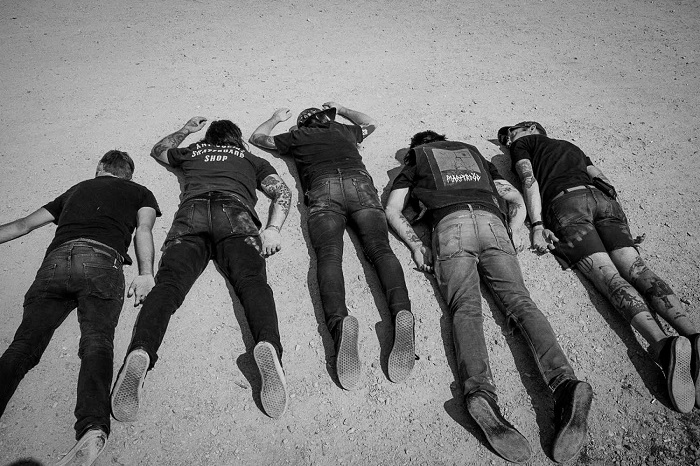 It always amazes me how many really great metal bands we have here in Pittsburgh that so many people around the world never have heard about before. Yes, bands such as Lady Beast, Heartless, Deathwhite, and Complete Failure have released well-received and crushing records on a worldwide level, but there is so much more underneath the surface.

This is not a story about Pittsburgh. Instead, I use my hometown as an example of how a city can have a treasure trove of good metal bands that people don’t know about, but it happens everywhere. Take, for example, Vancouver-based crushers Erosion that boasts members of noteworthy groups such as Baptists, 3 Inches of Blood, Tobeatic, and Hard Rippers, a band that’s been around for several years now, but outside their native stomping grounds, they haven’t made much headway. That should change with the release of their molten debut full-length “Maximum Suffering” on the recently revived Hydra Head, a label I have missed with all missed with all my heart and soul during their absence. This record is hard to classify, as there are elements of noise, punk, metal, sludge, you name it, as they combine every element they can find to make this raucous shit. The band—vocalist Jamie Hooper, guitarists Nick Yacyshyn and Rick O’Dell, bassist Andrew Drury, and drummer Danny Marshall—brings the noise and vitriol for the rest of humankind and dumps it into this thunderous 13-track assault.

“Maximum Suffering” is the longest track on the record at 5:40, and it arrives bleeding in before the bludgeoning occurs. Guitars scrape as the riffs rumble hard, and wild growls hammer your face. Sinewy guitars take it from there, as the pace gallops, the song fades for a second, and then drums storm again to the finish. “Everything Is Fucked,” which is true, starts the barnstorming, as the songs fly by in a hurry. This is steamrolling chaos that bruises and delivers hellish growls. “Need for Death” is sludgy, heavy, and crushing, a short blast that levels you. “Human Error” is pummeling as the guitars corrode, with the pace speeding up before a chunky, deranged dose of thrashing, going out with noise hanging in the air. “Serpent Lust” is speedy and violent, with Hooper wailing, “You had it all, but now it’s gone!” The track keeps going for the throat, delivering a monstrous finish and moving into “The Crone” that has a smothering groove with gurgling growls and huge blasts. “Deep in Hell” is crunchy and ugly, as its intensity builds and threatens. The guitars go off and burn, while the track comes to a clubbing close.

“We Have Failed Us,” which we have, is speedy and clobbering, going full on to decimate everything in front of it. The guitars steamroll, with the track getting even more vicious, as Hooper howls, “We! Have! Failed! Us!” “Scorched Earth” is both punishing and cavernous, as the vocals come in roared growls, the riffs shift, and the back end of the track is a total ass kicking. “Black Waves” charges up, as the guitars take on a black metal sheen in spots, and then we’re headed into a blinding mashing, where you’re forced to duck wild haymakers. “Storm of Steel” has a punk feel to it, getting melodic and sludgy as it goes on, with Hooper’s throaty growls digging away. The track has a super heavy underbelly, with the final moments blasting out. “Dusted” is a quick one, delivering murky bass, slow grinding, gross vocals, and a smudgy finish. “Consumed” closes shop, immediately going lightning fast and smashing fingers, with the vocals getting ultra-violent. The track goes into sweltering doom, with the vocals charring, the band slowly mauling, and the record burning out.

Maybe people didn’t know much about Erosion before now, but let’s smarten you up. “Maximum Suffering” is a record that fits nicely in Hydra Head’s pleasingly noisy catalog and also offers an ample beating for anyone who has been lulled to sleep. This band isn’t about to embrace and coddle you. You’re part of the problem, and they’re here to eliminate you.

For more on the label, go here: http://www.hydrahead.com/