So many people are obsessed with the idea of getting to heaven, whatever that happens to be. In fact, some are so hellbent (weird choice of word, sure) to get there, that they’ll use forms of hatred against other people to ensure that’s their destination. I know that sounds perverse. It is. I can’t imagine trying to explain that to someone from another planet with no concept of a god.

The strangeness of that concept, and humankind’s devotion to sin, are topics that permeate “The Arteries of Heresy,” the second album from Finnish one-man project Devouring Star. His examination of what it means to be human and the intrinsic inhibitions involved in that, especially the tendency toward sin, make up the bulk of this hellish, cavernous record that sounds and is huge. Artist JL has spread his chaos over the past several years, including the band’s 2015 debut “Through Lung and Heart,” and has established this group as one of the more thunderous, dissonant in all of metal. Each record, especially “The Arteries of Heresy,” twist and turn, pushing their way through the darkness into areas that terrify most people and even other bands. That’s a warning, by the way. 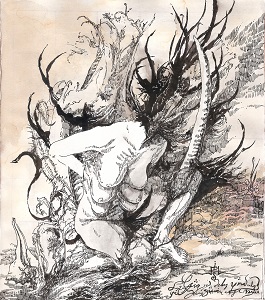 “Consummation” opens the record with noise building before the music starts slithering, and the growls hammer at your senses. The drums rumble, while the song goes into a hulking fury, obliterating everything in its wake, with a trail of dust behind. It keeps rupturing as melody rains down, the storm spreads dangerously, and everything bleeds out with creaking growls. “Procreation of Blood” opens with sounds falling as if through a vortex before the track tears open with horror, and the drums just erupt. Black metal melodies saturate the earth, while a hellish cloud builds up behind that and rages, burning dangerously before everything ends in a sound haze.

“Sin Assimilation” has a raucous start, with the drums mauling, and the music carving a destructive path. Total havoc is achieved, with the savagery coming to a boiling point, the madness stirring, and the track coming to a stabbing finish. “Scar Inscriptions” jangles at the start before the melodies get hypnotic and weird. The track clobbers, while raw growls push their way in and open up flesh. Things continue to spin, creating a vortex, while the melodies swelter, with the pace repeating and chewing away. From there, the music bashes away before bleeding out. “Her Divine Arteries” closes the album with guitars sweeping and growls smothering before the riffs ignite and scorch you. Punishing horror smears the ground, with hellish power and the melodies simmering. A black fury arrives from there, as the music spits nails, with the track coming to a blackened end.

There aren’t many artists out there quite like Devouring Star, who get into your bloodstream and darken your very inhibitions. “The Arteries of Heresy” is a record that’ll make you do some deep thinking along the way, though if that’s not your thing, you still can stop by for a psychological drubbing. This is another powerful building block for Devouring Star, one of the most fascinating bands in black metal.

For more on the band, go here: https://www.facebook.com/DevouringStar/