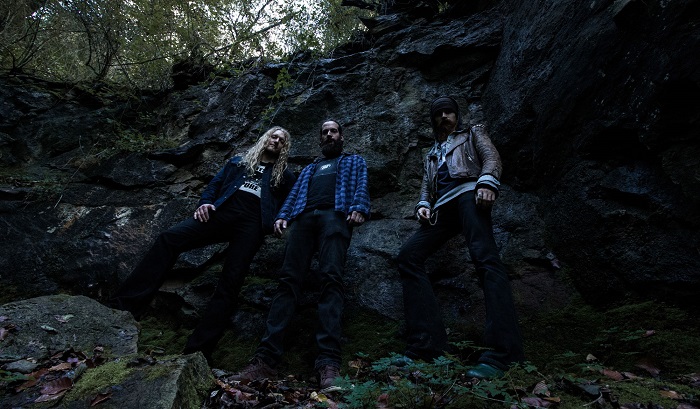 Doom metal wasn’t meant to be a quick and easy journey into the dark deep where you get in, get out, and go back to your life. There’s a price to be paid, and there are endless battles that often result in submission before the music truly becomes a part of you. So, three-minute jams just won’t cut it. It’s fully immersion or nothing.

That’s sort of a warning as we jump into “Carrier of Weight,” the debut from German doom crushers Eremit that will challenge you body and mind over it’s quaking existence. A mere three songs push over an expansive 68 minutes, though there’s hardly a section where things aren’t utterly compelling. Originally released independently in the fall of 2018, it’s been picked up by Transcending Obscurity and given the deeper push it deserves so it can entrance even more people. The obvious comparison points are there—Bell Witch, Mournful Congregation, Thergothon—though Eremit manage to do their own thing while still checking off the similarities one might expect from music of this nature. You definitely must give yourself over to these songs, the shortest of which is more than 11 minutes long, as they are adventures that must be undertaken in order to fully experience what they offer on this stunning record. The band—vocalist/guitarist Moritz Fabian, guitarist Pascal Sommer (who is no longer with the group), and drummer Marco Backer—deliver a hammering that lets you breathe and recover now and again before taking back to the ground for yet another pounding.

“Dry Land” opens the record, a 23:29-long mammoth that isn’t even the longest track on here. So, like, strap in. Keys simmer while the initial vocals creak, and a mesmerizing cloud hangs over everything. The track bursts as a whole about four minutes in as screams register, and burly riffs help with the heavy battering. A calm sequence settles in, playing games with your mind before the track kicks up the pace, and the vocals slice all over. The back end of the track feels grim and rotting, as shrieks strike, and everything ends in a torturous bath in hell. “Froth Is Beckoning” is the shortest of the bunch and still runs 11:23, beginning with punchy riffs and beefier growls. The riffs kill anew, leading the way for a tempo that lays waste, with the shout of “I’d rather be dead!” driving the dagger. The screams later snarl while the pressure is applied, as the track trudges through mud and congealing pools of blood. As the song nears its end, the playing gets a little faster, the menace is multiplied, and it all ends in noise.

“Cocoon of the Soul” is the album finale, a 33:22 beast that begins with sounds rising to the surface, guitars trembling, and things taking its time to thaw, which it finally does about seven minutes into the song. The band lands heavy blows while cries pierce, and a calculated assault begins to unfurl. The track is gut splitting in its delivery, peaking at about 11 minutes in with spacious leads and harsh growls driving with the command, “Awake me before dawn!” Guitars begin to spread into space, though they remain bludgeoning, with buzzing noise chewing away, and gazey melodies falling from the skies. Things then get more aggressive, as the track drops bricks and shrapnel before returning to its more deliberate pace. The song crunches into a cold section that leaves frost on your breath before everything erupts entirely, with the band ripping you to shreds before the violence is enveloped in fog, drawing it to its final resting place.

Records such as “Carrier of Weight” certainly fall into the “not for everyone” category simply based on how goddamn long these songs are, but that just means those folks aren’t going to experience fully the majesty that is Eremit. Equal parts might and adventure, these tracks test your strength and will in a way few bands ever dare, and if this music aligns with you, you’re bound to really love this record. This is doom for the true disciples who would follow this band into whatever darkened cave they’re led.

For more on the band, go here: https://www.facebook.com/EremitDoom

For more on the label, go here: https://meatmeadmetal.wordpress.com/2019/02/22/pick-of-the-week-bergraven-put-focus-on-memories-darkness-on-chilling-det-framlidna-minnet/