Black metal was supposed to be chaos, no rules, and utter destruction. A blight on the body of music that seeks to eat its way to the heart. That’s not actually true anymore as there are a ton of ways that bands get shit for going off script, but the ones that do tend to be the artists that keep things interesting and the listener guessing.

Nordic hell force 1349 are one of those bands. Despite creating some of the seminal black metals album of the past couple decades with “Beyond the Apocalypse” in 2004 and “Hellfire” in 2005, that never convinced them to stay the course and keep delivering versions of that record over and over again. “Revelations of the Black Flame” confused and pissed off some people in 2009 (it’s my favorite 1349 record, by the way) as it was a dense, mud-bleeding beast that didn’t sound like anything they’d done before. Things have continued to remain unpredictable for them, and that carries over onto their new two-track EP “Dødskamp.”  What’s even cooler than 1349 just having a new 7” release is how it came about: The song was commissioned by Visit Norway, Innovation Norway, and the Munch Museum to create a track based on an Edvard Munch piece, so they chose “Dødskamp.” The song itself is definitely a step in a different direction for the band—vocalist Ravn, guitarist Archanon, bassist Seidemann, drummer Frost—in that it’s a little more approachable than most of their material, but it’s still got an evil heart in the end. 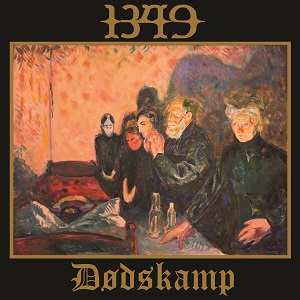 The title track begins with a total rock-n-roll drive, which might turn off some folks. I was a little surprised and worried at first, but let the thing grow. Eventually it gets darker and even sludgy with harsh growls scarring and Frost’s drumming turning bones to ash. “Death! Breeding death!” Ravn howls as melodies snake underneath the din, turning everything an ashy sickness. The track keeps pounding heavily, sending splinters flying before the song disappears into sounds similar to what brought the monster into existence. The B side is a live version of “Atomic Chapel” from their “Demonoir” album that sounds … fine. Maybe the digital promo doesn’t do it justice (wouldn’t be the first time that happened with a song), but it feels like the vocals are way up front and everything else is just sitting around in the background. It’s not bad, but I wasn’t blown away.

“Dødskamp” is a pretty unique release for 1349 and black metal in general, and it’s not a bad piece of work. This certainly isn’t prime 1349 material by any means, but it’s strong enough to tide over the hunger for a bit until a new full-length. And if anything, maybe it opens more eyes to Munch’s work, which is decidedly metal as hell.

For more on the band, go here: https://www.facebook.com/1349official