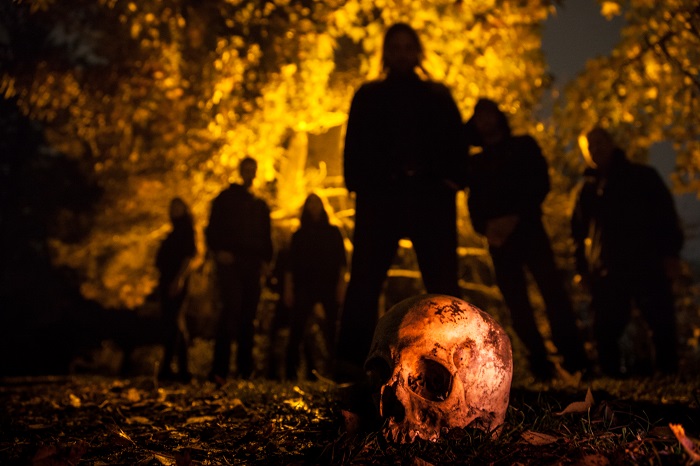 No matter how many records get written about on this site, and no matter how many I hear, there remain times when trying to accurately describe something is a frustrating challenging. That’s not a negative at all, because this means the music is inventive and compelling enough that trying to explain becomes almost pointless. Those records, by the way, tend to stick with me.

Portland, Ore., black metal band L’Acéphale fall into that category and have ever since the project got under way 17 years ago. There had been a long period of dormancy since their 2009 album “Stalhartes Gehause,” their second, but they’re back with a self-titled affair that is utterly astonishing and, as kind of noted in the intro, is extremely hard to put into words. Over seven tracks and nearly 74 minutes, the band—vocalist/keyboard player/mastermind Set Sothis Nox La, vocalist/guitarist Jared Huston, moog synthesizer player/vocalist Markus Wolff, bassist Danny Costa, drummer Charlie Mumma—lay out a dramatic, heavy, mesmerizing journey that demands a lot of the listener. But each ounce you give is paid back double as the chaos unfurls before you, with each chapter feeling like something from beyond this realm. Yet it all fits together shockingly well, with each new twist and turn either making your brain panic in its skull or your body feel like it’s been through unholy destruction. 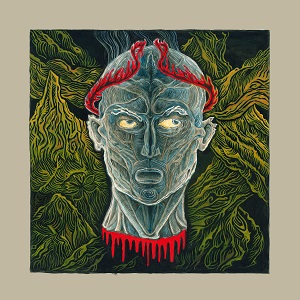 “Sovereignty” is the 12:13 opener that has voices floating over before the track blows open with strong, imaginative playing. The spacious hell eventually is countered by folkish melodies and acoustics, sending serenity until the next burst of shrapnel and destructive growls. Total savagery is afoot as the rhythm section clobbers, the guitars soar like a Maiden twin attack, and the track comes to a decimating finish. “In Gloria In Excelsis Mihi” is an early curveball, and trance-inducing track that features Geneviève Beaulieu of Menace Ruine on vocals, and her singing absolutely hypnotizes. It sounds like she is reaching out to a long-lost ghost, as the lines swirl and take off from each other. The first time I heard this, I was en route from NYC and had to turn off the song because I was so soothed, I feared falling into a daydream. It’s an amazing piece, something you wouldn’t hear on most metal records. “Runenburg” has an odd start before it lands punches with glorious riffs riding and the vocals drawing blood. The band manages to take their intensity to a new level, quaking your body and mind as riffs speed and threaten, and the growls are crazed. The tempo gets chunky and mean, with sludge being dumped in your path and the guitars spiraling off from there. Furious cosmic waves bounce off walls before the leads pierce skin and bleed out.

“Hark! The Battle Cry Is Ringing” begins with acoustics ringing out and bellowed singing, demanding, “Death to tyrants,” as darkness wells up behind. The track feels a bit like a Dark Ages dirge, with guitars buzzing and the melodies raining ash. Wordless calls send minds racing, while the guitars keep churning and giving off smoke, letting everything burn away. “Last Will” is utterly destructive from the start, making it feel like castle walls are coming down. Vile growls and a ferocious pace induce madness, while the skull duggery takes a brief respite to allow you to breathe before pained moans drag you by the arms, and the track ends in the clutches of a heavy dream state. “Sleep” has piano dripping, drum sticks smacking together, and a slowly hammering assault starting as everything devolves into morbid chaos. The playing is dark and menacing as feedback hangs in the air before everything is torn the fuck apart. War explodes from every corner as things melt into calculating trudging, paving the way for 19:15-long closer “Winternacht.” Eerie synth sets the scary tone as sinister growls are unleashed and guitars explore, while raw crunchiness turns into thrashy goodness. Melodies well up as clean singing slides in, and birds chirp as if the earth’s atmosphere is alive with color. Out of a folk-friendly section comes a bloodthirsty outburst that tears right at the guts. The violence is as hypnotic as it is merciless, and a long section with dialog on top heads into psyche wonder before the assault breaks out again, smearing blood and flesh into a sound void in which it disappears.

Understanding and absorbing a band such as L’Acéphale is not something done easily. This isn’t a push-play-and-get-destroyed kind of band. There are so many peaks and valleys and sounds and bursts and pullbacks that it takes some visits before the terrain doesn’t feel totally alien. But this self-titled work is one of the most indescribable records I can remember hearing the past few years, and its music is going to stick with me for a long time as I try to fully absorb its magic. This isn’t music for a quick pump up; this is an album for long periods of contemplation that will last far after the music has ended.