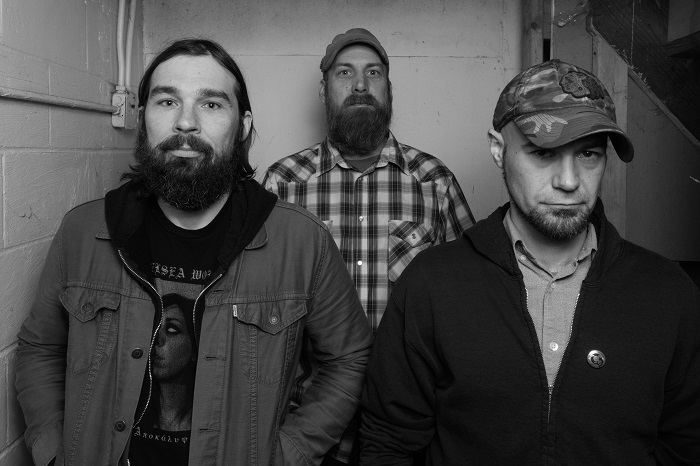 It sometimes feels like we live in a warzone. Not a physical one where bombs are dropping and guns are firing past out heads, but one where trying to operate within a society without taking on psychological damage in nearly impossible. Compassion for other humans appears to be at an all-time low, while the strive for near-dictatorial power is embraced by many people, unblinking.

Iowa City-based doom metal band Aseethe have returned with “Throes,” a five-track new record that’s a response to what’s going on in politics and society, and how we approach our lives, and it’s also the most diverse thing they’ve ever delivered. Don’t take that to mean they’ve gone off track from their smothering, unforgiving doom that met us on their first two full-lengths and their hefty collection of smaller releases. That all remains in place, though they branch out a little past there and make their sound more flexible and colorful. Here, the band—vocalist/guitarist Brian Barr, bassist/vocalist Noah Koester, drummer Eric Dierks—focus on wrath and the feelings and actions that result from the disintegrating political landscape and environmental issues, as well as the friction and bloodshed caused by fascists and others who seek to capitalize on people’s pain. The music sinks you into the darkness right away, and over the course of this monster of an album, you take on the sonic punishment the band seeks to dish to those who deserve it the most.

The title track opens the record with heavy trudging, feedback stinging, and monstrous growls that wrap around the hellish playing. “Cast far into violent motives, struggle, extinction, seething root, wrenching,” is delivered in a calculated manner while growls and shrieks combine to smear the madness. Atmospheric riffs later bring an infusion of oxygen before factory-heavy riffs drop bombs, clobbering as a slow-driving menace. The mammoth assault continues amid growls and relentless pounding that finally brings mercy. “To Victory” has a cold start that trickles in like cold rain, taking its time to develop an ambiance before the gates are crushed about two and a half minutes in. From there, the dual vocals clash and spear bone, while the hulking pace also has a sense of thrashiness that makes it more dangerous. Melody slips in like a stranger while the ground begins to quake again, leaving bruises and eventually melting back into the soil.

“Suffocating Burden” is an instrumental track that has sounds shaking, a strange cloud hovering overhead, and the mouth of the song enveloping, allowing “No Realm” into the room to shock the system. This track feels more like a post-hardcore bloodletting as it starts, with the guitars stabbing, the vocals barked with urgency, and massive doom eventually helping to counter the mood. The verses are frenetic with shouts of, “Infinite circles, direct propaganda, rendering violence, narcissists parade,” while the sounds send lava jolts, blistering the skin and coming to a splitting end. “Our Worth Is the New Measure” ends the record on a mystical note at first, as fog gathers and mist coats your face. Out of the eeriness comes a spurt of growls and shrieks utterly pummeling your mind, while misery-inducing sludging makes it hard to find balance, and the massive blasting knocks you to the ground. The playing bursts in your chest, the slow pounding mixes with splintering noise, and the track bludgeons without relent, sending consciousness hurtling toward total devastation.

We’re not bound to live in a harmonious society any time soon, as there are too many barriers to climb, too many wounds to heal, too many blows that can’t be taken back. Aseethe wallow in that torment on “Throes,” and while there are some exciting new twists and turns on the record, that doesn’t alleviate the hell in which we’re all immersed. This music won’t bring solace to those who battle every day, but it might help as an outlet to release that frustration in a productive way.

For more on the band, go here: https://www.facebook.com/aseethecreation/

For more on the label, go here: http://thrilljockey.com

One thought on “PICK OF THE WEEK: Aseethe focus on wrath, twist fiery doom on hammering, unforgiving ‘Throes’”