Despite all of the things that have changed with metal and music in general, hard work is something that still is necessary to get where you want to go. Sitting on your ass and hoping things will work out likely never has worked for anyone, but putting in the time, effort, sweat, and blood still is the answer to making your band and your music as powerful as possible.

That surely seems like as obvious an intro to a story that we’ve ever done. But when it comes to Texas-based Occult doom band Doomstress, that emphasis on hard work was their clear path to developing an audience and amassing people to come to their explosive shows. All of that travel they did, all the miles they put in and the shows they played all culminate in their debut offering “Sleep Among the Dead,” a seven-track barn-stormer that’s tight as fuck and spews with classic metal glory. I had a chance to see the band at last autumn’s Descendants of Crom festival, and they blew away the goddamn room, and that energy and power carries over to this record that quivers and quakes with glory. The band—bassist/vocalist “Doomstress” Alexa Hollada, guitarists Brandon Johnson and Matt Taylor, and drummer Tomasz Scull—lays waste from moment one, leaving a fiery path in their wake, all the while getting the juices pumping through your heart the entire length of this thunderous record. 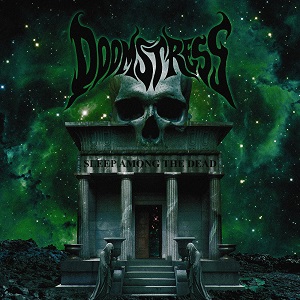 “Bitter Plea” gets things moving with punchy, cool riffs and crushing vocals delivered by Hollada, who is in utter command the entire record. The chorus hits a little darker, but that is torn to shreds by laser-sharp soloing and Hollada wailing, “I know I’ll burn in the end,” as the song comes to a raucous finish. “Burning Lotus” has tasty old-school guitar work, echoing singing, and a nice ’70s vibe. “Blackest night and the flower blooms,” Hollada calls, while the music gets a little sultry, steering into added heaviness. The soloing catches fire while the chorus rounds back for another burst, ending the track in a blast of flames. “Dreaming Spider” begins as a dark, reflective song before the riffs kick in, and dual guitar work slices bones. “Sleep now, infinity, your dreams are doomed,” Hollada warns, as strong leads take it from there, and the command, “Awaken from your silken tombs,” rouses the beast from its slumber. “Your God Is Blind” is scathing, arriving with blackened guitars conjuring flames, with Hollada insisting, “You’ve been deceived.” The chorus is a pounder, though sorrow follows close behind as the sentiment sinks in, and your shadows grow deeper. “The stain on your soul never washes away,” Hollada wails, before the band hits a nasty swagger, hammering home the song’s punishing point.

“Bones and Rust” starts with fuzzy bass work before a mystical aura surrounds, with Hollada noting, “The past is lost beneath the churning wheel.” The track then unleashes a sinister attitude, dual leads flash their blades and draw blood, and the chorus hammers back again to leave its imprints. “Apathetic Existence” is the longest track here, running 7:54, and it starts with a Sabbathy storm drizzling overhead and soaking the ground, while the eerie feelings spread over everything, leaving chills. The vocals go from breathy and gritty to damn near Geddy Lee-style highs that make your adrenaline soar, and the track keeps smothering and driving slowly, adding more pressure as they go. A wild cackle rings out, while the pace hits high gear, galloping through blood and dust as it tramples to its fiery end. The title track, which they’ve presented before on other recordings, finishes the album starting with the bass quivering and muddy trudging, with Hollada calling, “All your tomorrows are born tonight.” The muscular chorus flexes, as the group calls back the second part of each line of the chorus, leading to the song laying waste. “Through the stars you ascend when you sleep among the dead,” Hollada wails as the guitars catch fire and crush teeth, with the song ending in a pile of ash.

Not only is “Sleep Among the Dead” a great heavy metal record, it’s one that’ll easily allow you to immerse yourself in its vintage glory and smoking doom grounds. No doubt Doomstress have worked their asses off for this album, and it’s clear from the final product that every drop of effort they put into the album paid off greatly. Now that their followers have this full-length debut in which to disappear, it’s bound to make the band’s smothering live shows an even more familiar event as the entire room celebrates these killer songs.

For more on the band, go here: https://www.facebook.com/DoomstressBand

For more on the label, go here: https://www.ripple-music.com/