Pittsburgh has had a lot of luck recently when it comes to riches of metal shows, especially festivals. Last year alone we have Migration Fest and the second annual Descendants of Crom, and this year we have three big metal-friendly fests that are all spaced out in enough time to hit them all. Saturday will be the first ever Metal Immortal Festival, a day-long event at Mr. Smalls that serves true, classic metal.

Pittsburgh’s own Lady Beast are at the heart of this event, and if you follow their powerhouse singer Deborah Levine on social media, you know she’s been working hard to gear up for this show that starts at 5 pm., with doors opening an hour earlier. Anyone who was at Migration known Smalls is the ideal space for an event such as this one, and with two stages and only 10 minutes between sets, this thing will be furiously moving, serving up metal from bands hailing from the U.S. and Canada who are all here to pay homage to classic metal. There won’t be much sub-genre hopping, but that’s not a negative at all. This will be a time to celebrate the riffs, thrashing your head, and getting lost in a sound that used to just be heavy metal before all the sound splintering. It’s an awesome lineup, it’s not an expensive ticket at all, so let’s look at each band you’ll get to see Saturday night. 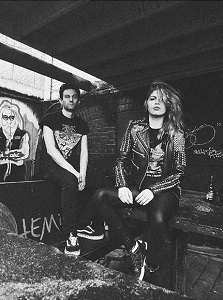 OUTLINE (5-5:25): Cleveland-based speed metal duo Outline released their debut record “Fire Whiplash” last year, a 22-minute mauler that celebrates everything purely metal and devilishly evil. The duo of vocalist/guitarist Tanza Speed and multi-instrumentalist J. Hammer should be a rousing, filthy way to get the fest kicked off.

For more on the band go here: https://www.facebook.com/outlinemetal/

LEGENDRY (6:15-6:45): Pittsburgh-borne epic heavy metal band Lengendry find themselves recording for the esteemed High Roller Records, and they have two records—2016’s “Mists of Time” and 2017’s “Dungeon Crawler” under their belts. Expect heavy fantasy elements and straight-up homage to Conan the Barbarian, which is bound to go over well with any metal audience.

For more on the band go here: https://www.facebook.com/legendryband/

FATAL CURSE (7:40-8:20): New York heavy metal squad Fatal Curse just released their debut record “Breaking the Trance” in April on the well-respected Shadow Kingdom Records, and their fiery, fun sound will leave people with blackened eyes. Their sound is riff heavy with vocals that sound like they were drawn up in 1982, which might not seem like a compliment, but it totally is.

For more on the band go here: https://www.facebook.com/Fatalcurse/

IRONFLAME (9:15-9:45): Right down south of Pittsburgh in Martins Ferry, Ohio, comes Funhouse Stage headliner Ironflame, whose striking power metal has given us two albums—2017’s “Lightning Strikes the Crown” and 2018’s “Takes of Splendor and Sorrow.” Andrew D’Cagna (Nechochwen, Icarus Witch) is the brains behind this whole thing that stomps around like it’s trying to wrest the crown from Queensryche, Manilla Road, and Maiden. This should rule.

For more on the band go here: https://www.facebook.com/IronflameUSA/

LADY BEAST (5:35-6:05): Lady Beast claimed two major accomplishments the past few years. First, they signed with Cruz del Sur, who released their awesome 2017 record (their third overall) “Vicious Breed.” And they were featured on Anthony Bourdain’s episode of “Parts Unknown” about Pittsburgh. They’re also a powerhouse traditional metal force led by the enigmatic Levine, whose stage presence could connect with people in the back of a stadium.

For more on the band go here: https://www.facebook.com/ladybeastofficial/

DESTRUCTOR (6:55-7:30): Long-running power/thrash band Destructor was a nice get for this show, and they bring more than 35 years’ experience along with them. Ever since their 1985 debut “Maximum Destruction” they’ve gone through periods of hiatus and member changes (vocalist/guitarist Dave Overkill and drummer Matt Flammable remain from the early days), and since 2007, they’re offered up three more records, their latest being 2017’s “Decibel Casualties.”

For more on the band go here: https://www.facebook.com/DestructorMetal

SAVAGE MASTER (8:30-9:05): Kentucky’s Savage Master combines whips, chains, leather, and spiked collar-wrapped heavy metal that’s punishing and fun as fuck. Over the course of two full-lengths “Mask of the Devil” and “With Whips and Chains,” the band has stuffed their records with devilish fury and a display that’ll make you think you’re strapped to a Medieval torture device. Also, singer Stacey Savage is an utter force to behold, and if you don’t bow to her wishes, she’ll bloody for face.

For more on the band go here: https://www.facebook.com/savagemasterofficial/

NIGHT DEMON (9:50-10:30): California’s Night Demon opened a lot of eyes with their Century Media/Steamhammer-released debut record “Curse of the Damned,” one of the best metal records in any sub-genre in 2015. They offered their second effort “Darkness Remains” two years later, proving their ridiculously heavy traditional metal not only is utterly solid but also made for a larger stage. If only they’d been born 30 years sooner. Nonetheless, we have them now, and their music should sound ideal on the larger Chapel Stage as they capture the night.

For more on the band go here: https://www.facebook.com/nightdemonband

RAZOR (10:45-CLOSE): Legendary Canadian speed thrashers Razor finish off the fest with music from their more than 35-year-old career, one that spawned eight albums, though their last one was 1997’s “Decibels,” which was released by Chaotic Records. Having recorded for labels such as Viper and Steamhammer, with their music later released by labels such as Roadracer and Relapse, Razor is a band that brings chaos, devastation, and muscular riffs, and they’ve been long respected and worshipped by musicians who played along with them and followed them for an awfully good reason.

For more on the band go here: https://razorband.bandcamp.com/

Along with all of this, there will be a generous slew of vendors that’ll be there to help you get your fill of records and other good shit, and the folks from George Romero’s film school will be there shooting a documentary about the event and metal fans in general. So, if someone asks you what you think of anything but metal, make sure you answer that it belongs “on fucking Mars, man.”

For tickets to the event, go here: https://mrsmalls.com/events/metal-immortal-festival/