Taking a chance when it comes to making music either can be a rewarding surprise or an unmitigated disaster that probably should have remained on the shelf. Whatever the result, it’s still a worthwhile venture because even if things turn out really not good, there’s a chance to learn and get better. And when it goes well, you have something that jumpstarts your blood flow.

“False Confession,” the debut LP from Weeping Sores, definitely falls in the latter category. Mixing death, doom, and violin is a thing that either could go very right or depressingly wrong, but all the right buttons are hammered over and over again on this thing, making it one of the more interesting debuts to come along this year. Combining Doug Moore (guitars, bass, vocals) and Stephen Schweiger (drums) from death chameleons Pyrrhon with violinist Gina Eygenhuysen, who played live with Tchornobog, the band crafts a compelling, pulverizing amalgamation of the dark arts on this six-track, 56-minute collection. With that run time and that amount of songs, you already have figured out this band puts together lengthy compositions, and you’d be right. But they never overstay their welcome and, in fact, make great use out of every inch of sound that’s here, putting together nightmares, shadows, and ghostly beauty into a devastating package. 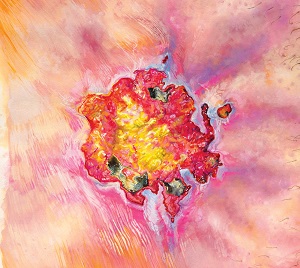 “Scars Whispering Secret Tongues” opens the record with equal parts crunch and delicacy as adventurous riffs swell, and grim growls destroy. There’s a sense of adventure as well as things shoot into space and the guitars slurp. Growls and shrieks trade places before an orchestral sweep comes in, the track lurches, and a strong solo leads into a hazy fog. Mournful playing then bleeds before the violin takes us into the dark. “Song of Embers” flows in feeling reflective at first before the strings thicken, and the emotion wells up. The ground rumbles as growls cut through, while the violin pounds and stuns, growls smear, and fire and melody intertwine. The track hammers, vicious growls smear, and things come to a savage end. “Transfiguration of Flesh Into Dream” is lurching hell from the start before ugly, smashing death arrives, and a ferocious pace dictates terms. Steamy leads stretch, making your head swim, while ugly vocals bubble to the surface, demolition lands, and the violin adds a sinister vibe that ends the song in terror.

“The Leech Called Shame” drubs from the start, feeling inventive as the violin flows. That goes into mammoth pounding as the strings blend in again and sting, a trudging fury mounts, and your mind can’t help dripping from your ears as the track ends in a bed of feedback. “Valediction Prayer” sludges slowly as the growls and shrieks again unite, and the tempo pounds heavily as the violin drizzles pain. Noise scrapes as the song blends into proggy territory, while things pick up and feel more dangerous. The song takes on a baroque horror feel while the music swims through the air, you can’t help but feel disoriented, and everything bleeds out in noise. “Sinking Beneath the Waves” ends the record with strings echoing and slurry riffs getting going. Mean roars slash as the track parades in muck, and snarling death smashes the senses. Growls gurgle blood before calm sets in, taking its time before going off again. When it does, the track mixes brutality and melody, your synapses split, and an angelic haze hangs over everything as the record melts into a time warp.

Weeping Sores is more than just an interesting project from three well-accomplished creators. It’s a smothering, inventive group responsible for a shape-shifting record in “False Confession” that seems to change before your eyes and ears with each listen. The album and band are more than a sum of their parts; this is a promising beast that I can only image how it will sound once record two comes along.

For more on the band, go here: https://www.facebook.com/weepingsores/