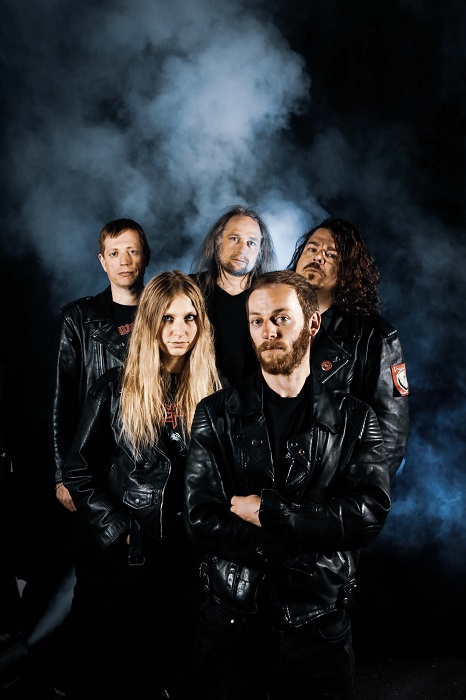 Over the past decade and a half, there has been so much death and black metal clogging up extreme music’s veins, that it seemed many had forgotten there were either ways to play this stuff. Yet slowly, things swung back, and bands that employed more drama and clean singing worked their way back in to claim time, and that’s made the whole scene a more nuanced place in which to be.

I’m not sure a band such as Atlantean Kodex would have been as roundly accepted by a larger audience had they been in the meat of their career 15 years ago. It was a different time, and things had switched to tougher styles, and bands like these tended to fall by the wayside with extreme music audiences. Then again, it’s hard to deny a band as great as this, so maybe they’d have been the exception. Nonetheless, we have them now, and their magnificent third album “The Course of Empire” has arrived six years after their high-water mark “The White Goddess” aggressively grabbed people’s attention (it was our No. 1 record that year). This new one hardly pulls back on the ambition, the huge sounds, and the soaring vocals that help make this band as special as it is. With 10 tracks spread over nearly 63 minutes, everything here is epic and huge. This is another master class in epic heavy metal, making them the closest modern equivalent we have to an Iron Maiden or a Manilla Road. But they’re so much different than those bands, and so many others than came before them, that I don’t want to pigeonhole this German crew—vocalist Markus Becker, guitarists Manuel Trummer and Coralie Baier, bassist Florian Kreuzer, and drummer Mario Weiss. They’re a force of nature barely contained to wax. 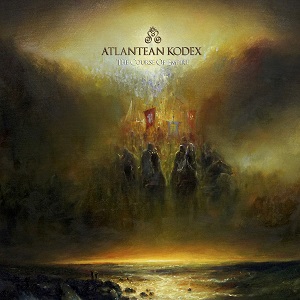 “The Alpha and the Occident (Rising from Atlantean Tombs)” is a quick, yet vibrant opening where guitars begin to awaken, and Becker calls, “Empires, rise, empires fall,” a sentiment that returns later in the record. “People of the Moon (Dawn of Creation)” trudges open and is a perfection dictionary definition of an Atlantean Kodex song. The verses pump, and once the chorus arrives, all gears are shoved into overdrive, with Becker wailing, “And now our hearts still yearn, but the world, unheeding, turns.” The track pulls back a bit before a big return complete with guitars slathering, the pace charging, and Becker singing, “Ghost kings chanting of tragedy and mirth,” as the song ends. “Lion of Chaldea (The Heroes’ Journey)” keeps the momentum moving as winds blow in, horses trample, and a killer metallic riff cuts through steel. “We walk as giants among mankind,” Becker declares, as a tremendous chorus jams in yet another dagger. The soloing catches fire and burns out of control, the chorus resurges, and the track ends in flames. “Chariots (Descending from Zagros)” has a cinematic opening, as Becker calls, “Tremble all ye who have heard the call, for another kingdom falls.” The track then gets pretty savage, as the band pounds away, and a massive chorus strikes, as Becker sings of “devouring rage, brimstone, fire, and smoke.” The track continues to char while an emotional solo guts before the assault lessens, and the track ends in quiet guitars and softer vocals. “The Innermost Light (Sensus Fidei)” takes its time building, as Becker warns, “Where there is silence, there is thunder,” as the group harmonizes behind him. Ominous drumming rings out while organs swell, and Becker finishes with, “No more war in the palace of light.”

“A Secret Byzantium (Numbered as Sand and the Stars)” has a calculated open, taking its time to stretch its wings as cities burn. “In their tales, we became gods,” Becker notes, melding the idea of legends and tragedy. The chorus is pretty different, even understated, as the tale rambles on. “A path of wisdom we blazed through heathen darkness,” Becker calls as the track winds down, birds chirp, and doomed bells ring. “He Who Walks Behind the Years (Place of Sounding Drums)” is thunderous and immersed in European folk music, with a heavier edge setting sparks. “Will I ever walk this earth again?” Becker wonders, though later he reminds, “My kingdom is not of this world,” as a powerful solo tears down walls. The tempo and tone both are ignited, while the band bashes away, the singing soars, and the final moment return to the same, lush folk base that greeted us. “Spell of the Western Sea (Among Wolves and Thieves)” is a quick track with water crashing, singing floating, remembering a time when the narrator was king, and things flowing toward “The Course of Empire (All Thrones in Earth and Heaven)” that has a modern Maiden taste to it. “Empires rise, empires fall,” Becker reminds, coming full circle from the record’s start, as the track splashes like a tidal wave, sweeping you along with it. “Nothing sacred’s left alive,” Becker wails before the band goes into a full “woah-oh” chorus that should be a killer live, with the track suddenly fading away about seven minutes in. It rises again in the arms of folk before things explode again, and the track comes to a glorious finish. Closer  “Die welt von Gestern (Abendland)” closes the record with a voice speaking in German, waves crashing, and the feeling of being at sea. Fire crackle and the music heads off over the horizon.

The glory of heavy metal is alive and well with Atlantean Kodex, one of the great bands of our age. “The Course of Empire” is another rushing, historically slashing record that makes your heart soar while also directing you toward Google searches to learn more about the content that makes up these songs. There are few bands as special as this, so whenever we get to bask in their glory, we should remember to realize how memorable their presence really is.