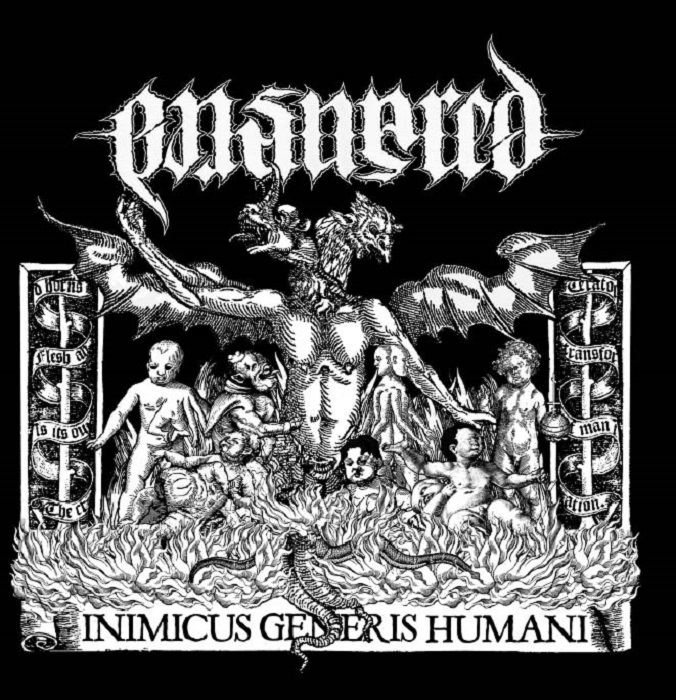 When I put on a death metal record, I don’t necessarily demand utter brutality that makes my teeth grind. But it’s nice when I get it, as long as it’s well played and feels like the product of folks with true ferocity in their hearts who aren’t just here to be violent for violence sake. You can see through the flimsy shit, and that stuff never lasts.

When it comes to Swedish death crew Ensnared, it doesn’t take long to figure out their music is the product of diseased souls and a lifetime of disgust. Their music always has felt like death metal that’s here to exorcise demons, and that carries over onto their devastating second record “Inimicus Generis Humani” that’s eight tracks and 41 minutes of audio violence. That’s a perfectly dished serving, by the way. Not too much to overstuff you and just enough the satisfy that ache inside. This follow-up to their 2017 debut “Dysangelium” is punishing right off the bat. The bio materials hint that there’s an old-style feel to what they do, and that’s totally accurate. The band—H.K. (guitars, vocals), J.K. (drums)—is down to a duo from the quartet that was on their debut, but nonetheless, this effort is smothering and pain-inducing, a record that’ll leave you bruised.

Interestingly, “Interlude I” starts the record, an instrumental that has guitars buzzing and keys glimmering, picking up along the way until power slices through. Things slow down eventually, sounding like the last gasp of a dying machine. “Spiritual Necrosis” bleeds in before bursting apart and fully pummeling. H.K.’s hoarse growls do their job and stun you as rubbery riffs spark chaos before dizzying you. The track keeps rampaging through a kill solo, then the vocals return, with the final section squeezing your brain. “The Throne of Transformation” has swaggering guitars that push their hips into black metal before the pace lurches grossly, and speed is unleashed. The track threatens as it stampedes, sinewy playing flexes, and the track burns out. “Interlude II” reveals bubbly clean guitars as the melody comes in elusive and dark, and the eeriness increases your anxiety.

“Disciples of the Whip” rips open the second half with a crushing pace and a heavily charging assault that slips into total laceration. It feels like the earth itself is paying a dear price as H.K. howls, “We are the source of your torment,” as the song barrels into hell. “Interlude III” is strange and alluring with melodies that boast an urban vibe before fading out. “Katharsis Through Terror” comes at you stirring and grinding as the growls split bones, and the atmosphere is grim. “Don’t be tempted by the light,” H.K. warns while the bands pounds with reckless abandon. Closer “Black Hole Acolytes” is the longest of the set, running 9:34 and taking its time unleashing its dark journey. It is fully engulfed about 4 minutes in as the power starts to roll downhill. The playing is savage and mean, offering not an ounce of mercy before the guitars hypnotize, and the song melts out into horror.

Ensnared’s venomous death metal is as sharp and dangerous as ever on “Inimicus Generis Humani,” and taking this on will result in physical and mental anguish. As noted, this is tried-and-true death metal, but it’s never formulaic or predictable. It’s played in a manner in which the progenitors of the sound expected, and it’s a savage beast that tears your world apart.

For more on the band, go here: https://www.facebook.com/nsnrdgbg/