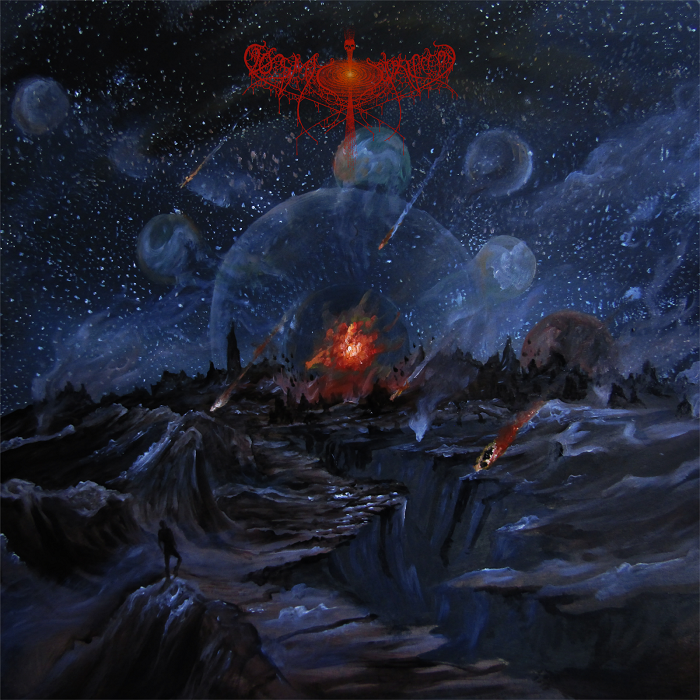 You’re looking over a decayed, destroyed alien wasteland. You can tell there has been some sort of habitation, but you can’t tell when nor how long things have been in this state. Scanning the horizon, there is no real hint of anything lurking, but you just don’t know, and there’s no way for you to feel safe in your new surroundings.

If you get that sensation taking on “The Horizons Towards Which Splendour Withers,” the second full-length from Cosmic Putrefaction, you’re not alone. I couldn’t stop imagining this scene as this vile expression of death metal plays out. Italian composer Gabriele Gramaglia (he goes by the moniker G.G. for this project), who also is the brains behind The Clearing Path and Summit, unleashes some of his most vicious and visceral music yet on this album. It also will play tricks with your mind, hence the strange nightmare scene that keeps playing out in my head and is detailed above. On top of that, these six tracks that run over a compact 34:31 provide just enough of a punch to get your strangest inhibitions going but never overstay their welcome. It’s nasty.

“Between Awe and Fear Upon the Burst of the Ominous Star” tears the lid off the record with death lurking in all corners, and gross, vicious growls strike as the tempo punches away and the bass playing warps. Leads open up the atmosphere, but then it’s back to straight-up mauling right up to the mucky finish. “This Landscape Sublimates Oblivion to Obliteration”  lets guitars get fired up as the growls swallow you into its stomach and release the gastric acid. The playing trudges away until we head into the stars for some wondrous imagination before reality takes hold again and delivers violence.  Vast destruction is handed out as the pace fires hard, with everything ending in a pit of vicious growls. “The Glooming Murk of His Telluric Shrieks” is full of warped guitars and buzzsaw vocals that roll in the deepest basements of hell. The playing creaks before giving way to thrashy madness, while your head spins uncontrollably, and then everything ends in a strange wash of calming acoustics.

“Abysmal Resonance Projection” bursts with strange sound effects and punishment tossed with eerie whispers. The track then detonates as a tornadic path is carved before it halts for a brief display of space synth. Then it’s back to a tempered pace that’s still ridiculously heavy as melodies swirl, and things come to an unsettling end. “The Arcane Soothsayer Carefully Sculpted His Demise” destroys from the word go as the playing is thrashy and ugly, while speaking echoes and the guitar slurs. Growls barrel through as the playing glimmers, continually ripping holes in your sanity until the keys drip the last remnants of brain matter. “Utterance of the Fall of Man” is your closer, and we’re introduced to a warm synth bath and like-minded guitars that later get eaten up by a doomy fury. The growls slither through filth while the guitars burn, heading toward another bout with the cosmos. It feels like there are stars in your head as the playing feels hypnotic, and you’re lured past the sun to terrain unexplored.

Cosmic Putrefaction’s mind-bending death metal continues to explode into the galaxy on “The Horizons Towards Which Splendour Withers,” a title that takes longer to type than it takes to hear this fascinating display, or so it seems. This is music that sparks the most morbid of thoughts and inspires vision of horrors one could not imagine alone without the accompaniment of this music. This is a massively destructive display that eats away at your brain and leads you into madness.