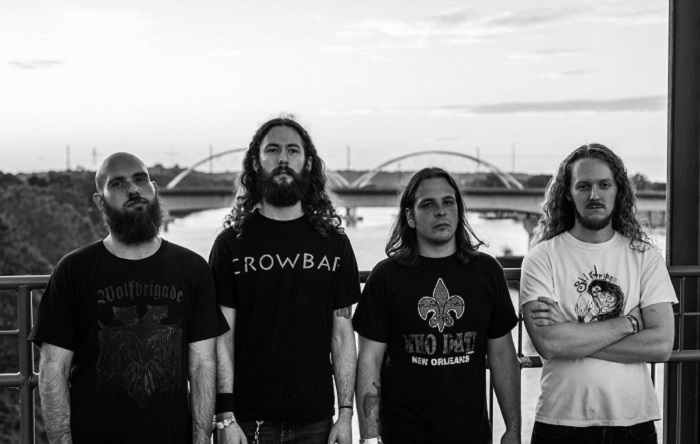 There are tons of things we should and should not do every day of our lives, and likely most of our track records are not terribly stellar when it comes to making the right call. I’m definitely not alone on this one as I often decide to stay up longer than my body wants, thus robbing myself or rest, or indulging in that extra beer (or some would say any beer at all) when it might not be great for me.

The idea of working against what we understand is right is known in Sanskrit as “Prajnaparadha,” which means a crime against wisdom, something that prevents us from achieving enlightenment. It also happens to be the name of imminently arriving album three from Sumokem, which is their best work to date. Over this collection, most of which bathes in sprawling doom, stoner gaze, and progressive ambition, the band—vocalist/guitarist Jacob Sawrie, guitarist Tyler Weaver, bassist Dustin Weddle, drummer Drew Skarda—examines that path toward making decisions that are fruitful to one’s journey on a concept record that’s immersive, exciting, and really goddamn fiery as we travel six tracks in about 53 minutes, with every bit grabbing your attention in a stranglehold. 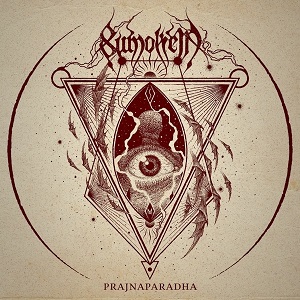 “Prologue” is an opening piece that feels eerie and in the midst of fog when it starts before the music and the drama increase, giving off a gothy vibe and working into the mist toward “Nihang” that absolutely soars open. Guitars beam as a psychedelic edge is achieved, and Sawrie’s powerful vocals, which deserve recognition for how strong they are, lead the way. The mood then darkens and gruff growls arrive, hammers are dropped, and guitars go ablaze into a churning pace, with metal slowly liquifying. Twin guitars meld as the vocals take off, and the body of the song burns off into the night. “Parak-Dar” runs a healthy 11:06 and emerges with awakening guitars and vocals taking off. Humidity is thick as sun-scorched playing works into a thick psychedelic cloud that warps your mind, surging just as the vocals begin pelting your chest. Syrupy slide guitars mesmerize as the growls scrape along before utterly crushing souls as punchy sludge chokes the pipes, trudging to the end.

“Sadhu” is the longest track, running 12:11 and opening the curtain into mysticism, with Sawrie noting, “The planets align with the earth.” Vicious growls and smothering riffs bring on savagery that pokes through the surface, while leads bleed into sludgy earth before cool breezes reign, reawakening as the vocals push toward the sky. Mud gets into the gears and drives the track into filth while psychosis melts into the waters, as bluesy playing stretches, keys glimmer, and the darkness swallows everything whole.
“Fakir” slowly drips in and delivers strangeness that spreads, while the melodies hit hard, and the vocals punish. The growls twist bones only for Sawrie’s clean singing to return and branch out, simmering in richness. The pace then starts to bash away as the growls return and menace, slipping into a cosmic void that slips into the darkness. “Khizer” ends the record and immediately makes your head swim before the thorns are unleashed. That makes your mind dissolve and drip through your consciousness before riffs tear at the wall again, and the whole thing spirals. Singing bellows and reverberates in your chest as the final moments are torched and left to dissolve into madness.

This is Sumokem’s finest hour, a record that truly pays off the promise this band has held all along in a majestic way. “Prajnaparadha” is exhilarating and soul-scorching from moment one, a record that knocks you for a loop without you even realizing it, and suddenly you’re sitting there later not knowing what happened. This is tremendous work, and hopefully this record gets into enough ears to make a major difference for this band.

For more on the band, go here: https://www.facebook.com/SUMOKEM