I think we all miss live shows. For me, I had a huge year of shows planned from going to Maryland Deathfest basically just to see Dismember, to the 2020 installment of Migration Fest, to seeing bands such as Sheer Mag and Borknagar in my hometown, to finally getting to witness Faith No More in the flesh again. This virus ruined everything from that aspect.

So, all that taken into account, it probably sounds really strange and irresponsible as fuck to say there’s a live record coming out that was recorded during the pandemic, but there’s more to it than that. UK-based doom/sludge/hardcore mashers Allfather hardly seem the type to defy science and medical experts and produce a live recording in front of a packed audience, so they did the next best thing. The band—vocalist Tom Ballard, guitarist Alan Cordner, bassist Andrew Day, drummer Guy Smith—headed to Century Audio recording studio and blasted out a live EP “Century Sessions Vol. 1” that put no one in any danger, except for the psyche of those hammered by these songs. Included are three Allfather favorites, as well as two new cuts you get to hear for the first time, and it’s a raucous, satisfying collection that sort of ices over those wounds from not being able to see our favorite bands in the flesh. 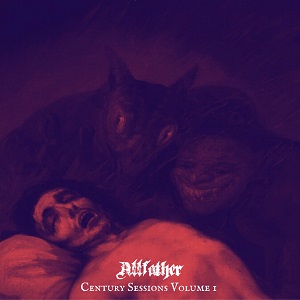 We start with a rousing raw version of “Citadels” as everything feels lively when Ballard’s voice rushes in and leaves bruising. Growls and shrieks shatter glass while the soloing lights up, with Ballard declaring, “Once more we ride,” burning hopeful, determined torches when he ends with the familiar call, “We should be burning flags and raising hell.” “Raskolnikov” has drums rupturing as the track crushes open with gnarly wails and scorched guitar work, as the tempo boils. Ballard’s vicious, repeated shrieks of, “I, the murderer!” smashes senses, with the chaos bleeding into “Black Lungs,” a new track that feels like a riot approaching, with Ballard’s screams quaking the earth. The track is thrashy and aggressive, something that’ll fit alongside their other work very well but also entice appetites for what’s ahead. Soot is smeared as retribution is sought, with Ballard howling, “Put yourself in the ground,” as the song kicks up mud. “By Sword, By Famine, By Plague” is another crusher from their back catalog, namely 2018’s “And All Will Be Desolation.” This take is a little longer than the album version, erupting with vicious shrieks and some awesome bluesy swagger later on, as the track batters the senses, ending in a pit of smothering doom and violent sludge. We end with another new cut “Poison Soil” that lands punches early and opens the gates to domination. “Behold your extinction!” Ballard warns as heavy strikes rain down, the drums decimate, and the band opens a thrash clinic. From there, the doom center is punctured, guitars bubble up, and the band mashes bodies to the end.

It’s not easy to produce a live documented actually performed during the quarantine era without being an irresponsible asshole not caring about other people’s well-being. Allfather are not those assholes, as they found a safe, yet effective way to rip out some old favorites and give a quick taste of what’s to come. “Century Sessions Vol. 1” is that live recording you didn’t realize would make you desperate to experience live music again and satisfied to get this close.

For more on the band, go here: https://www.facebook.com/allfathermetaluk