We are at a sort of crossroads as people. We’re dealing with the worst health crisis of most of our lives, and there is so much upheaval the world over, especially in the United States, that it feels like we’re building to some kind of awakening. Or an unmitigated disaster, but it depends on us to divert such a thing from happening.

Feel like I’ve said this about other records a million times, but there’s so way Sumac could have known just how profound their new album “May You Be Held” would be when it finally landed. But here we are, many of us trapped where we are, others having to make their way into the public like nothing ever happened, and we all have to make sense of it all. While in no way is this record a cure all, there’s a good chance if you immerse yourself into the chaotic world rumbling here, the music could take on a cathartic role. The band—guitarist/vocalist Aaron Turner, bassist Brian Cook, drummer Nick Yacyshyn—brings forth all the elements needed for a personal transformation including the chaos, the pain, the struggles, and the hope that might be at the end of the path. Bathing in the music could make it feel like the trauma we’re been facing is burning off our bodies as we regenerate into a newer, better form. 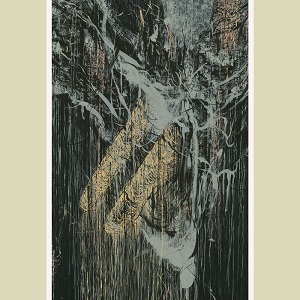 “A Prayer for Your Path” opens the record and is almost like a reflection piece, albeit in oceans of noise, that acts as a gateway into the body of the record. Sounds reverberate as calls enter into the mix and get swallowed, leading toward a feedback rise and right into the title track, the longest track here clocking in at 19:52. Guitars crunch as Turner’s wails begin to stick, growing more animalistic as the track gets meatier. Powerful lashes are followed by an atmospheric bend that is pierced by lion roars and a mashing tempo that’s eventually erased by a long period of music hanging in the air threateningly. Drums begin to crash to the ground as slow mauling is administered, then guitars spit static as the noises coil, smearing growls and heavy clobbering into piles of dust in the ground.

“The Iron Chair” also serves guitars piping hot and attacking as the volume bursts, and molten hell flows freely and thickly in front of you. Fierce howls pummel as a psyche haze is achieved, which hints at something later, and noise pressure rises until it bursts. “Consumed” is the second-longest cut, running 16:58 and starting with noise sparks that pierce flesh. The track chugs hard and stomps mud in place as Turner calls, “So slow, so tired.” The pace hypnotizes as serene waters flow and chill flesh before the body reopens, and the vocals split atoms. From there, the track begins to tear worlds apart, bashing away, firing up a million hornets nests as vile roars crunch bones, and the band flattens everything in its wake like a comet crushing earth. “Laughter and Silence” is the nine-minute closer and is like a sound bath designed to soothe the scorched flesh from your trip through the middle. Psychedelic fog slows as the band achieves an ambiance where your mind is put to rest, you see colors and planes before unexperienced, and everything settles itself into a soaking, soft rain that carries you on your way out.

It’s beating a dead horse to mention how we’re in an unprecedented situation with a deadly virus spreading and leadership continually showing its uncovered ass, but there’s a truth to the fact that we’ll get beyond this at some point, and we must be ready for that. Sumac have the very document that could help you with that mentally and cosmically with “May You Be Held.” This is not the first time we’ve faced adversity, but what we do now depends on what our future is like, and having music like this can help open the mind and make the journey a little less terrifying to tackle.

For more on the band, go here: https://www.facebook.com/SUMACBAND/

For more on the label, go here: http://thrilljockey.com/index