In this time of trying to find a distraction that isn’t something damaging to one’s psyche or physical well-being, we can look to nature as well as anything that moves our spirit in the right direction. Having the windows open with a cool early autumn breeze moving into my workspace, it makes for the right mental phase where it can line up with music and permanently imprint that on my brain for years to come.

I have that experience all the time with records that have strayed with me—what was the season when we first came into contact?—and I have a feeling I may have that same relationship with “Abreaction,” the third full-length from black metal chameleons Amiensus. This music struck me really hard right in the chest a couple weeks ago when listening during work, and it happened to be one of those late-summer cool days that hinted at what lies ahead. This is their first full-length since 2015’s “Ascension,” and the band—vocalist/guitarist James Benson, guitarist/keyboard player/vocalist Alec Rozsa, guitarist Kelsey Roe, bassist Todd Farnham, drummer Chris Piette—continue to expand their palette, adding elements of forestal folk and progressive metal into their amalgamation that can be downright arresting if it hits you at the right time. 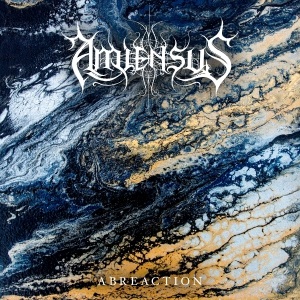 “Beneath the Waves” opens with clean strumming and Benson’s singing stretching out, with harsh cries hitting over the chorus. “What do you know? What do you feel?” is growled with menace as the drums crush, and then dreamy thunder strikes. Benson sings the same growled lines cleanly, but the shrieks return before the track bows out. “Divinity” has acoustics blending in before the track opens up with a clean singing/shrieking mix and moodier playing that sets the tone. The track eventually bursts with thoughtful chaos as the pace rumbles, the vocals swell, and the track ends in rustic energy. “To the Edge of Life” tears open with shrieks raining down, the keys aching, and the track heading into colder waters that soothe. Gazey playing builds up a lather as harsh cries strike with calls of, “Scrutinize! What did you find?” as things fire up before the gushing spills into gentle acoustics.  “A Convocation of Spirits” rises up with strong singing erupting, shrieks following, with Benson wailing, “Can you still hear me from the other side?” That causes drama to stir as violent tendencies emerge, tearing tendons, but then clean singing returns, acoustics push into the mix, and everything washes away.

“Euphorica” begins with heavy pounding as the riffs flex their muscles, and the shrieks aim to tear down walls. There is smooth singing over the chorus before murk takes over, clean trickling merges with heaviness, and waters rush hard to the shore. “Drowned” blasts in with drums crushing, guitars rinsing you with blood, and the shrieks smash boundaries. Hypnosis nears as the growls stir, while wrenching hell is administered later, while Benson’s singing adds other color streams that wash into the sea. “Cold Viscera” has a trudging pace out front while the growls land blows, and the atmosphere becomes more turbulent. The playing jerks around corners as the guitars charge up, sinister growls create bruising, and a storming fury takes the track to its end. “All That Is Unknown” awakens to growls and shrieks bustling and melodies rushing, making the playing feel dramatic and grim at the same time. The playing cascades as it captures you and takes you on a journey, crashing through calm as it blasts away. “Iconoclasm” has a bit of an Enslaved edge to it, bringing synthy punch and penetrating growls to the foggy atmosphere. Keys plink through like ice daggers as the rage builds musically, spreading great dark wings before disappearing into the night. There’s an acoustic, instrumental take on “A Convocation of Spirits” that ends the record, letting your blood pressure come back to earth.

Amiensus’ cerebral mix of black metal, progressive metal, and folk continues to do wonders on “Abreaction,” their first full-length record in five years. Benson said the record feels truer to what the band sounds like live as they’ve learned to work and play together more efficiently, and you can hear that in these exciting, full-bodied songs. This is a record that hopefully puts the band’s name on more people’s tongues, especially those who can appreciate an ambitious group that can unleash storms right from the center of their hearts.

For more on the band, go here: https://www.facebook.com/Amiensus

For more on the label, go here: https://transcendingrecords.com/