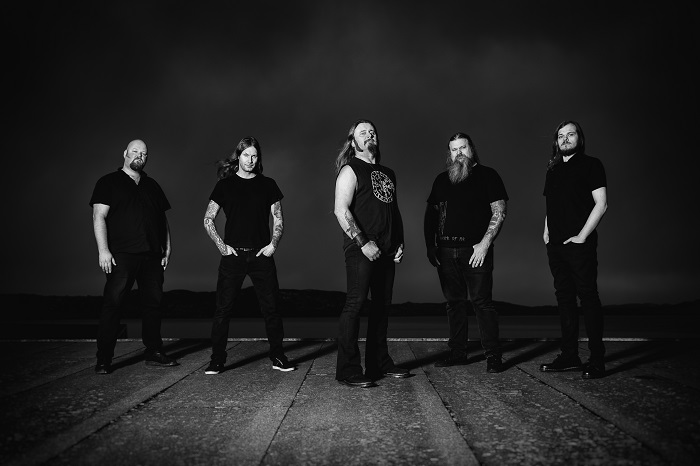 This has been a year of overcoming incredible obstacles, and we still have a lot of time to go and plenty of strange hurdles ahead. We are dealing with worldwide illnesses, people denying they exist, political turmoil, social upheaval, and who knows what’s lying ahead in wait for us? The fight can’t let up because we’re tired or scared, otherwise we lose.

Long-running Nordic progressive black metal band Enslaved weren’t necessarily thinking of the matters above when crafting their masterful 15th record “Utgard,” but they did have their mind on the idea of entering the land of giants and trying to conquer beasts in order to find one’s true strength. That’s not necessarily literal, though your land of giants could be something tangible, but it also can be mental or spiritual as you climb great heights to face what opposes you. They do this on a record that’s an incredibly fresh slab of ingenuity from a band that’s long twisted the concepts of heavy music and refused to be weighed down by sub-genre rules. The band—vocalist Grutle Kjellson, guitarists Ivar Bjørnson and  Arve “Ice Dale” Isdal, keyboard player/clean vocalist Håkon Vinje, drummer Iver Sandøy—also deliver more tracks with song lengths shorter than what we’ve grown used from them, resulting in leaner, sharper sound that absolutely bursts with life. Also, it should be noted this record was supposed to arrive this past spring, but due to the uncertainly surrounding COVID-19, the record now arrives first week of October.

“Fires in the Dark” starts the record with boisterous chants, feeling like an army of Vikings rowing down a river, before the track opens into murkiness and Kjellson’s unmistakable growls leading the charge. “Ancient gods told us where to go,” he cries as Vinje picks up with, “Mountains told us how to be,” existing in great symmetry as the track ends in acoustics and mist. “Jettegryta” is savage from the start, raging alongside sweeping synth while growls gargle. Proggy organs sink their way in as keys zap like cosmic lightning, while the final moments are fiery and daring. “Sequence” punches in as Vinje’s soulful singing fills chests with emotion, and the keys shimmer like a mountainside coated in ice. Once again, the vocal interplay is enthralling before breezes set in and bring some calm. The clean singing pushes through as the intensity builds again, and final jolts with Kjellson’s carving growls finish off the path. “Homebound” lands one of the record’s best, nastiest riffs that barrels its way through the center, while the singing continues to gain life, and the melodies are spellbinding. But it all comes back to that riff that road-races its way through the heart of the track, leaving exhaust behind.

The title track is an instrumental bridge with synth poking through and a booming voice speaking over, like the intro to an apocalyptic video game, and then it’s on to “Urjotun,” where it picks up the pace with keys stabbing and a tempo that’s damn near danceable. The singing comes from deep within Vinje’s chest as the growls wash in behind it, and the heaviness smashes boundaries. Later on, the singing feels properly detached, as if coming from a dream, while the flurry of keys causes dizziness you can’t shake. “Flight of Thought and Memory” charges up and delivers hammers, though melody finds its way into the ugliness as usual, while notes seem to float in the air. The playing suddenly gusts and delivers fierce punishment while Kjellson’s growls tear into flesh, causing your body to burn before a coolness settles in, swimming through the chaos to treat wounds and change the weather. “Storms of Utgard” begins with heavy rains, fittingly, while the band balances heaviness with atmospherics, building the drama along with your blood pressure. The track pokes away while singing fills the air, and guitars soar before crashing to the shore. “Distant Seasons” ends the record and is a slower, softer track that situates more in dreamy prog rock than metal. Vinje takes center here as the track works to numb you over ans salve the wounds you suffered up to this point as the band creates an immersive haze and finally finishes with reflective tones that send you on your way.

Over 15 records and nearly three decades, Enslaved have carved their name into legend already, yet they continue to produce standard-stretching music like we hear on “Utgard.” Perhaps the delay in this music finding us was for the better, as these tracks will sound ideal as the leaves change color and colder airs greet us, reminding of the winter ahead. This band is one of the greats of the genre for good reason, and this record is yet another heaping, astonishing reason why.

For more on the band, go here: https://www.facebook.com/enslaved

For more on the label, go here: https://www.nuclearblast.com/en/label/