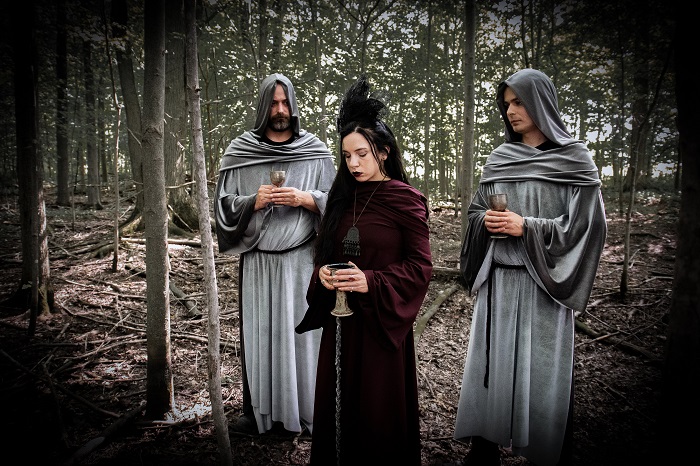 We’re at a volatile standpoint when it comes to the health of our world, but 68 million people this week decided that wasn’t dealbreaker enough not to vote for someone standing in complete opposition of that idea. But if you listen to scientists, you’d know we’re making a devastating impact on the world in which we live, and we don’t have much time to react.

That all comes to mind when talking about “Death Cult,” the new record from Canadian trio Völur, and one of the best recordings of their run. The record was partially inspired by Germanic tribes near the Baltic Sea in the earliest days of A.D. sacrificing slaves via drowning to their goddess Nertha. That whole idea conceptually is something we’ve never shed. You know, the whole “God will save us” idea instead of humans banding together to take actions to affect change. The band—vocalist/electric violin player Laura C. Bates, bassist/vocalist Lucas Gadke, drummer Justin Ruppel—realized it was a trap that’s followed us through time and led to things like our world decaying, people denying viruses are real things that need to be battled, and faith put into bad leaders only here to milk a buck out of their followers. So, yeah, it’s something of a political album but one that tackles issues in a completely different manner, dressed in their classical, free jazz-influenced doom that will shake your foundation. 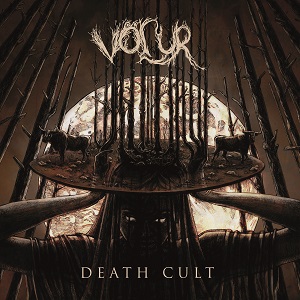 “Inviolate Grove” begins with Bates’ strings sweltering as the playing begins to pump, and melodies enrapture. Both Bates and Gadke sing as the violin makes inroads into your soul. Ominous tones float as the singing feels haunting while the track lights up, and Gadke’s growls break through barriers. The track erupts and bleeds as the violin lathers up and hypnotizes, while the vocals explode, the drama spreads, and the path burns right to “Dead Moon” that simmers in eerie choral circles and a bed of strings. The first portion is rather calming, with the violin quietly shuffling like a ghost before they begin to soar and ache. Bates’ shrieks then strike and tear through flesh as the playing is utterly gut wrenching, continuing to add power as the strings sweep, and the main melody line flows through again. A heavy haze settles over everything as the growls punish, and a huge deluge brings the track to its end.

“Freyjan Death Cult” runs 11:20 and begins mysteriously as woodwinds send chills through the trees, while the strings scrape, melting into a bluesy sequence where Bates sings and Gadke bellows behind her ritualistically. She then unleashes growls as the pace picks up, later switching back to clean vocals, while Gadke’s bass adds steam and tramples through the madness, as a psychedelic edge sinks in its teeth. Noise spits and rumbles while the growls sprawl, and a furious uprising increases the heat. Explosive rage hammers as the shrieks cut to bone, the playing floods dangerously, and the final moments disappear into the fog. “Reverend Queen” is your closer, bathing in feedback before the strings loop in, and a choral section opens its jaws. Things turn ugly as the growls hammer, melodies stir, and Bates’ violin strikes back and blares with agitation. But then things pull back, a solitary violin creates a horizon line, and the final moments bask in heavy sorrow that leads you into what lies in shadows.

Völur remain one of heavy music’s most unique bands, and by the way, if you ever have a chance to see them live (I know, I know), definitely make that happen for yourself. I’d be excited to hear how the tracks from “Death Cult” sound with this trio at the helm, breathing their Neoclassical, metallic fire into each piece. This is an arresting, adventurous record that contains some of the finest work of Völur’s career, and they’ve yet to unleash anything on us that isn’t exhilarating.

For more on the band, go here: https://www.facebook.com/VolurDoom