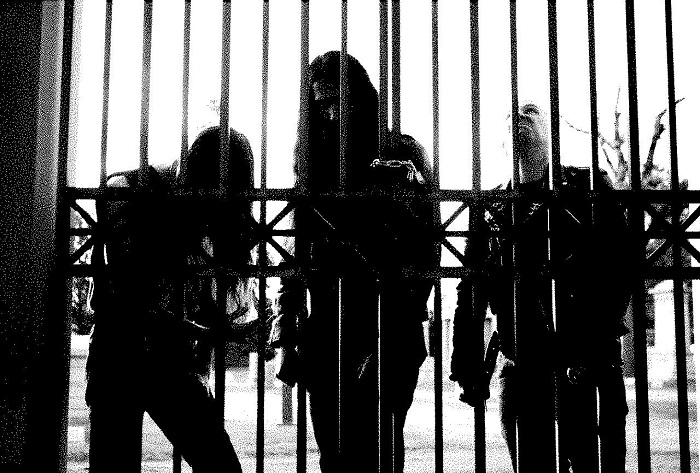 We expect and hope that our death metal is going to be harsh and violent, because that’s the best type of this style of music hands down. Yeah, I know it’s not the only way to play this stuff, and I guess if everyone went for the jugular that it might be tiresome quickly, but when a band obviously has no concern for you, and you can tell from their intensity, that’s quite the bloody treat.

Denver’s Of Feather and Bone have taken that idea to ridiculous levels on their savage third record “Sulfuric Disintegration,” the heaviest music they have created to date by far. And these guys weren’t exactly warm and fuzzy before, but something in them must have sickened or spoiled or turned them into some inhuman beasts roaming the earth when they went in to create this album. From moment one on this thing, it’s clear you’re in for the fight of your life as the band—guitarist/vocalist DG, bassist/vocalist AS, drummer PW—just goes for it and doesn’t look behind, even while bodies, loose parts, blood, and piss leave a disgusting trail behind them. 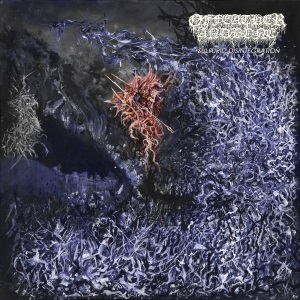 “Regurgitated Communion” is both gross and totally not something we want to be around, what with us in a pandemic, but musically it absolutely destroys with a gut-wrenching death metal assault. The riffs hammer you as cavernous growls begin to cut wounds on your trunk, while the pace makes a paste out of your bones, driving you mercilessly into the earth. “Entropic Self Immolation” clashes with your senses, with speed and power raging hard, and a smashing abandon going for the throat. Any throat. A beastly barrage attacks as the drums come unglued, clobbering with ferocity as the track blasts into space. “Noctemnania” begins amid a drumming slaughter while the growls punish, and their chaos tests your sanity. The playing races all over the place, just pounding away as zany speed gets almost comical, guitars chug, and the brutality finally relents.

“Consecrated and Consumed” is doomy and stormy as it unloads, blocking out your sight as you veer ahead at top speed. Grinding fury fires on all cylinders as the riffs aim to erase your mind, delivering a truckload of violence. The pace shifts and actually manages to get more aggressive as the track ends in menacing fashion. “Sulfuric Sodomy (Disintegration of Christ)” roars with rage as it gets started, as deep growls boil in blood, and the drums lambaste mind, body, and wretched soul. There’s no hope of being saved from this display as the band keeps the foot on the gas, sending you hurtling toward hypnotic hell. “Baptized in Boiling Phlegm,” which is disgusting, ends the record by immediately going off to the races, as riffs roll up, and the playing stretches its muscles. Guitars rampage before the song slows and hits sludgy territory, suffocating before the playing rips apart again, the tempo blazes, and a final gust of inhumane savagery pukes its last.

Of Feather and Bone have seriously upped the ante as far as deranged chaos and bludgeoning death metal force on “Sulfuric Disintegration.” Every time out, this band gets heavier and more explosive, and they have no concern with your mental or physical well-being as they’re pounding you into eternal damnation. This is one of the nastiest death metal records of the year, and you’ll legit need recovery time every time you take on this fucking beast.

For more on the band, go here: https://offeatherandbone666.bandcamp.com/

For more on the label, go here: https://profoundlorerecords.com/