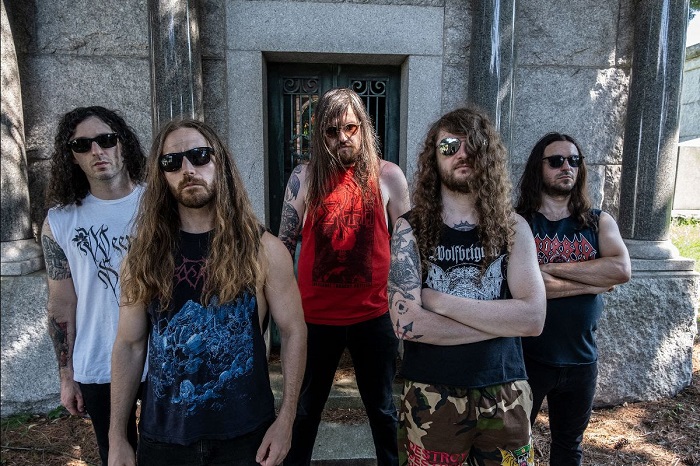 Sunday night is WWE’s Survivor Series, and when I was a kid, it was one of my favorite events because it put together all of these insane forces on one team for the first time to face another team of equally colossal power in order to find out which members of the winning team would survive. It’s lost a ton of luster over the years, but I still love the idea of five mega forces joining to make one huge team.

I’d take the five people who make up death metal supergroup Glorious Depravity to take it to any other five musicians in a battle for supremacy and survival, and their debut full-length “Ageless Violence” is all I need as evidence to back up that idea. I’d also watch that match over almost anything on this year’s Survivor Series, but the utter savagery this band created together is the real story. Combining members of bands such as Pyrrhon, Mutilation Rites, Woe, Hexer, Belus and plenty others to create their seven-track first record that rips the contents from your cavity. Protect your guts! The band—vocalist Doug Moore, guitarists George Paul and Matt Mewton, bassist John McKinney, and drummer Chris Grigg—unleash true, blistering, bloodied death that feels like it’s coming for your life and won’t stop until you do. 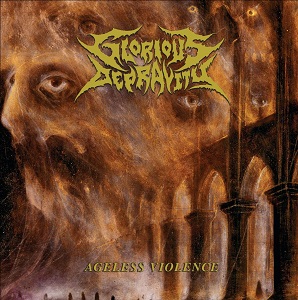 “Ocean of Scabs” is a thing I never want to be immersed in, but it’s our opener, so here we go. The track rips open as Moore’s growls land their first blows, and the riffs crush your senses. The drumming decimates as shrieks whip up behind the chaos, guitars go off, and everything churns to a vicious ending.  “(In the Clutches of) the Oligarchic Exsanguinator” starts with weird, chilling speaking before the track opens its jaws and starts consuming, and choppy thrashing aggravates any bruising that has accumulated. Vile shrieks rush through as the soloing goes off, disgusting fury lurks, and the track takes its final nail right to its head. “Incel Christ” is one of the best song titles of the year, and this thing starts in instant hell as growls boil, and the riffs rampage. Dizzying rage impacts your balance while the guitar work adds heat, the growls hammer, and the track ends up bleeding on the slaughterhouse floor.

“The Stone Hammer Swings” blasts in with shrieks, and the drumming going for the kill while grim growls lurk, and the channeled pace leaves scorch marks. Vile chaos emerges with thick basslines blackening eyes, and the heat is allowed to hang around. The playing sends shots to your ribcage, leaving you heaving and vulnerable. “Digital Reaper” opens in total hysteria, smothering you through a mucky pace that leaves you gasping for air and paving the way for razor-sharp guitar work to deface. The pace steamrolls and some insane soloing explodes, making your head spin out of control. “Hospital Incinerator Blues” bathes in weird noises before the playing chugs, and the growls go for your throat. Shrieks destroy and bring panic, while a slower pace lets the band really sink in the punishment, making you feel every bit of their sinister mission that pushes you to your limits. “Forced to Witness” mercilessly ends the record as feedback gathers, and slow-driving playing aims to achieve a submission they don’t tend to honor. Wild soloing and feral shrieks that duel with guttural growls amplify the danger while the leads scald you raw. Channeled hell rises as the band rips shit apart, all while Moore repeatedly taunts, “You are forced to witness!” as the track burns its last drips of fuel.

Glorious Depravity manage to be even greater than the sum of its parts, which could be tough to navigate with so many vital forces coming together to create this band. “Ageless Violence” lives up to its promise and spends most of its run time making a mockery of your feelings and weak stomach, as they gleefully rampage through you. Hopefully this isn’t a one-off project, because this band living into the future to maim others is my dream right now based on how wonderfully deviant this record is.

For more on the band, go here: https://www.facebook.com/gloriousdepravity/