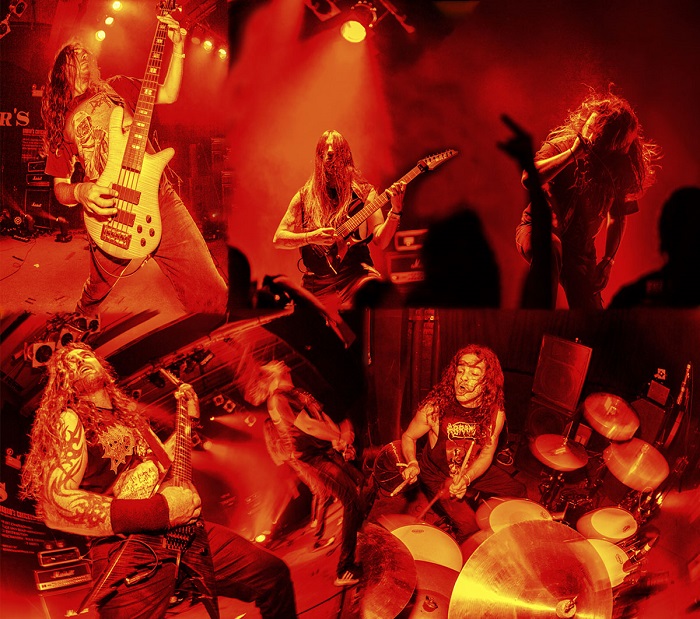 We don’t get to do this very often, but we’re kind of bookending the end of last week with the start of this using depravity. Friday, we had the debut record from Glorious Depravity, and now today, we have the new one from Aussie death squad Depravity, who are here to ensure things get off to a disgusting, punishing start.

“Grand Malevolence” is the band’s second record in a mere four years together, and once again, Transcending Obscurity is behind this one, which is 11 tracks and nearly 50 minutes of death metal ferocity that rarely relents as it drags you into battle. The band—vocalist Jamie Kay, guitarists Lynton Cessford and Jarrod Curly, bassist Ainsley Watkins, drummer Louis Rando—bring experience from other groups including Impiety, Entrails Eradicated, Scourge, and plenty others to the proceedings, though what they do here goes even beyond what their collective other projects accomplish. This is a furious nightmare that seeks to scar and maim you, and it succeeds time and time again. 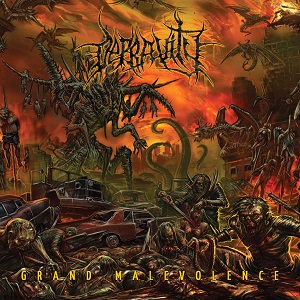 “Indulging Psychotic Thoughts” opens the record crushing organs as gut-wrenching growls and total savagery set the stage for this track and what’s ahead. Punches are thrown as the blood flows, scorching earth as it bleeds out. The title track opens pounding away as the growls curdle, and a smashing ferocity spits sparks. Melodic leads slice into flesh while lurching growls belch hard, and the track blasts final nails. “Invalid Majesty” enters with nasty eruptions and ripping growls while the earth rumbles beneath you. Viciousness is placed on the agenda as windmill blows are landed, and then things turn sludgy and even uglier, leading to a mangling final burst that scars psyches. “Cantankerous Butcher” is a tremendous title, and the song matches. It’s pure brutality as speed strikes, and the growls pay off the agitation of aforementioned butcher. The playing then unloads and confounds, pouring corrosive chemicals on your yawning wounds. “Trophies of Inhumanity,” which I assume are not mere participation awards, stomps through the mud amid guttural growls and manic pacing. Fluid soloing lights up and scrambles brains, while a final ignition melts flesh from skulls.

“Castrate the Perpetrators” brings strong playing and gritty growls as dual leads penetrate, and wild shrieks cut through. The leads ignite and blaze new trails while melody mixes in with the hell, and the playing goes cold and chilling as it streams away. “The Coming of the Hammering” explodes from the gates as the relentless pace crushes, while growls and shrieks mix to amplify the terror. The guitars spiral, hell is unleashed on earth, and the rampage finally ends in a suffocating cloud of smoke. “Barbaric Eternity” sounds exactly like what its title indicates, jolting and paving the path for deep growls and mauling punishment. Growls engorge and the speed jars, and then it’s on to “Hallucination Aflame” that clobbers and leaves bones behind. The gas pedal is jammed through the floor as the body of the song caves down walls, guitars swoop, and driving fury leaves everything in the dust. “Epitome of Extinction” has guitars awakening and a blistering tempo that looks to inflict permanent injury. The vocals jar while the bass charges up, techy pockets smash your brain wiring, and the track ends in a hint of melody. “Ghosts in the Void” is the closer and it bleeds in, haunting and making your flesh crawl, as the devastation chugs hard. Violence blows open with the growls spilling blood, and the track lands some final blows that leave you feeling damn near concussed.

As the year starts to wind closed, we have a clear view backward of what some of the most vicious releases of the year have been, and Depravity’s “Grand Malevolence” must be considered for that list if you’re being honest. It’s a gut ripper, a record that makes you feel uncomfortable and bruised deeply when you’re finished, yet you want to go back for more. This is a mangling dose of death metal that is as sick and warped as they come.

For more on the band, go here: https://www.facebook.com/Depravitydestroy