It’s not healthy from a physical or mental standpoint to be overcome by stresses and anxieties, and not taking the time to recognize these things and face them can be destructive in the long run. Unfortunately, there are not easy solutions to apply across the board, so everyone has a stake in handling spiraling matters so we don’t go down the drain to hell.

A major part of my own attempts to remain as sane as I can be is to designate times to branch out beyond myself, get centered, and practice meditation, all of which have made a major difference in my life, even though I’m still suffering. I also heavily connected with “Temple,” the new record from Belgian psychedelic doom dreamers Wolvennest, their second effort overall. The music on this eight-track, 77-minute album must be visited in full, requiring a complete immersion in their occult-like creations that also can take you by the hand and help you see a more settling pathway through chaos. The band—vocalist/theremin player Shazzula, vocalist DéHà, guitarists Michel Kirby, Corvus Von Burtle, and Marc De Backer, bassist John Marx, drummer Bram Moerenhout—poured everything they had in this creation that came together as the pandemic was just beginning to get scary, and they left nothing on the floor. Every part of these players is in this music, and that personal and spiritual inclusion is a major part of what makes this album the experience it is. 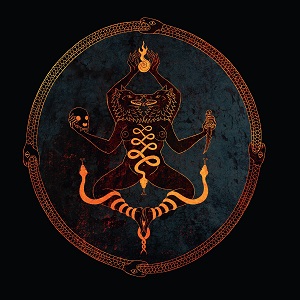 “Mantra” is the 12:26-long opener and the longest track here, starting with a long, burning intro that finally opens up with wordless calls floating. “My heart is burning,” Shazzula calls as the track gains intensity and grows more hypnotic. “Enter the temple of love,” Shazzula invites as the guitars heat up, sounds corrode, and the humidity thickens, ending in a weighty haze. “Swear to Fire” has sounds swirling and guitars charging, delivering a doomy storm. The vocals mesmerize as a haunting psychosis thickens, feeling like you’re floating in a dream. Dark vocals chill as they travel through time, and then the leads heat up again. Guitars encircle as the trance thickens, spilling out into madness. “Alecto” starts with music chiming and your mind wandering as they set up a vibe and pay that off with spacious excitement. The guitars sprawl as the pace warms up, feeling like it’s taking direct flight into the heart of the sun. Things then ease, trickling slowly as this instrumental cut bows. “Incarnation” unfurls and heads into a disorienting fog as the singing numbs, and melodies wash over your mind. “It’s dark in here, but yet I see,” Shazzula cries, as the tempo stirs and jostles, the guitars agitate, and a flood of group calls sets your mind on a strange adventure.

“All that Black” is the shortest cut as 6:34, bringing steamy playing that wilts your flesh. “I like darkness,” Shazzula calls, “Darkness is beautiful,” as chant-like vocals settle over like a storm. Guitars boil as the psyche sizzling scorches the earth, finally burning into ash. “Succubus” features King Dude on vocals, and it’s a 11:27-long ballad that digs into your brain. It unfurls as slide guitars haunt, the playing quivers, and Dude wonders, “Will she ever let me say goodbye?” The track digs into your heart and eats it alive, the sounds slowly die, and the sun finally sets on hope. “Disappear” has a slow-boiling start as ghostly, almost vampiric vocals slither, and the music continues to pick up intensity. Howled words and bellowed singing unite, dark shadows unfurl and cover the earth, and icy blood begins to flow and take you along with it. “Souffle de Mort” ends the record slowly stirring as the drumming rumbles. Shazzula sings in French, sounding alluring and haunting, while the guitars generate heat. The playing is total entrancement, leaving your mind iced over as the vocals continue to dig in their claws. Speaking then jolts, the sounds burn in your belly, and the track ends owning sections of your mind.

I feel like the best way to indulge in “Temple” is to find a way to calm your nerves and your mind, darken the room, and let the sounds float over you and into your pores. Wolvennest, with uncertainty and fear ruling the world, pushed all of their creative boundaries into these 77 minutes, continually finding ways to capture and recharge your imagination. Finding ways to connect with the universe isn’t easy in the midst of so much chaos, but Wolvennest were able to overcome those hurdles, and their music can help guide you on your own journey.

For more on the band, go here: https://www.facebook.com/wolvennestband

For more on the label, go here: https://www.van-records.com/