Certainly, we all know the adage that all good things come to an end. Well, it’s not just all good things. It’s all things. Everything has a lifespan that, once it runs its course, fades out into the night. Creative ventures operate a little differently as those involved can keep things operating and breathing as long as they want, sometime well past the point of health.

One-man Swedish black metal project Panphage has come to its end. While only in existence since 2005, with the first full-length “Storm” not arriving until a decade later, sole creator Fjällbrandt has chosen to cease the project’s existence with the exhilarating third album “Jord,” which is the Swedish word for “soil.” One could argue that in the band’s relatively brief existence, Fjällbrandt has enriched the earth in the underground black metal realms, and now that the harvest is as hearty as ever, it’s time to bow out and let other bands have their time. This record pays honor to Fjällbrandt’s homeland’s heritage, as well as death and rebirth, be it physical, mental, creative, what have you. The seven tracks here well up inside your heart and soul as the soaring melodies and impactful wails (even if sung in a tongue foreign to our own) connect on a spiritual level and help the listener mark the end with Panphage. 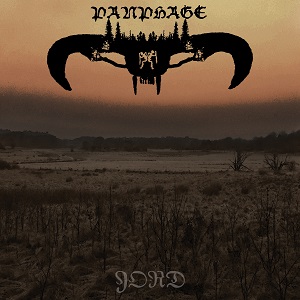 “Odalmarkerna” starts the record with waves rushing and the power surging, as gruff growls make their way into the mix, and a melodic surge knocks you backward. The leads burn and glow while the vocals push through, and primal emotions and playing color the song’s final moments. “Måtte dessa bygder brinna” is harsh from the start, as the playing ruptures, and everything flows into an open field of melody. The vocals turn to wild howls, as if calling out from the wilderness, and an infectious chorus makes your heart surge. Lines are repeated like chants, while the playing envelops your soul, and the music overwhelms like a tidal wave. “Ygg (En visa om julen)” has sinister riffs combining with echoing growls, as a heavy Swedish folk influence makes its presence felt before the stormfront rages, and the guitars cascade like sheets of rain. Raw calls blister over the meaty basslines, while the final minute feels like the awakening from a summer shower.

“Skadinawjo” has a clean, calm opening before powerful riffs arrive, and the whole thing ignites. There is a female choral section spread over the chaos, while jarring, heavy growls meet up with a thrashy section that bruises. The tempo manages to get even more violent, and that spills right into “Den tyste åsen” that begins with a colorful explosion. The verses crush, while clean bellowing levels you in the guts, and the guitars cut through the madness. Strings mix in, giving the song a rustic Euro folk feel, and a spirited chorus and a last blast of energy bring the song to a blistering end.  “Som man sår får man skörda” has a savage start, as the music mounts an assault, and Fjällbrandt’s growls start to pummel the senses. The leads blend into woodsy savagery, and then the song halts and enters calm. Knocks echo, haunting you, and then the riffs explode again. Primal shouts make a crater-like impact, while raw fury boils over and the storm fades away. Closer “Osådda skall åkrarna växa (Outro)” has a calm voice calling over reflective music, as the energy lets down, the intensity melts, and the record, like Panphage’s music, fades away.

As Fjällbrandt lays to rest the ashes of Panphage, we always will have “Jord” to return to in order to be nourished time and time again. As for the legacy of this project’s music, it certainly is leaving black metal in a better place than the one it entered 13 years. We pay homage to the awesome band that’s brought us three amazing records, the last of which acted as the perfect epitaph to Fjällbrandt’s creations.

For more on the band, go here: https://panphage.bandcamp.com/

For more on the label, go here: https://nordvis.com/