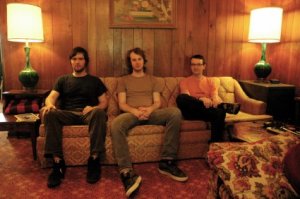 I like when a band insists on not making the same album twice, but Horseback take this idea to ridiculous levels. I mean that as a high compliment.

While the Jenks Miller-led, Chapel Hill, N.C., band already had been around for a while, my first exposure to them came with 2009’s “Invisible Mountain,” which later was picked up and re-released by Relapse. It is a Western-washed slab of drone and ambiance, with Miller’s black metal-style shrieking jarring you awake, making you wonder what the hell is going on. It’s a record that took me a while to embrace, but once I did, I revisited it pretty regularly and always found nuances and passages I didn’t really notice on previous listens. The gift that keeps on giving. In fact, after spending time absorbing and analyzing the album I’m about to discuss, I went back and spent more time on the “Mountain” and realized that, while I realized Horseback refused to repeat themselves, and I never really realized just how varied their work is. 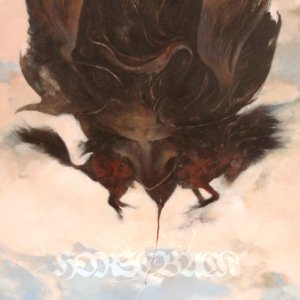 “The Gorgon Tongue” is a compilation being released by Relapse that combines their 2007 effort “Impale Golden Horn” and 2010’s “Forbidden Planet,” originally only available on cassette. The two-disc collection not only makes it sound like totally different creators are responsible for each half, it even might make you wonder how the same minds could come up with “Invisible Mountain,” itself a completely different style of collection from these two albums. It’s mind blowing! You could play all three aforementioned albums for someone unfamiliar with the band and convince that person he/she is listening to three different groups. All of this, by the way, is a precursor to their new record “Half Blood,” which the band currently is finishing up for Relapse. I can only imagine – or maybe I can’t – what this thing’s going to sound like. Italian film score black death, perhaps?

Let’s break down each disc, because it’s pretty necessary. The “Impale Golden Horn” portion is a dreamy, psychedelic soundscape that won’t feel all that metal to you at first. To me, it sounds like a combination of Nadja’s headiness and imagination and Explosions in the Sky’s emotion and beauty. The four cuts are quite long, and two pieces “Finale” and “Laughing Celestial Architect” form a 32-minute center point that, if sequenced together, would sound hinged and inseparable from each other. In fact, they could bleed together, and act like one large piece in two suites. If you listened on shuffle and heard them back to back, you wouldn’t even realize when one piece ends and the other begins. The only hint of vocals on this effort comes on opener “Blood Fountain,” where Miller quietly, softly sings just a bit, but there’s not a hint of ugliness or harshness that you find on disc two.

That’s what leads us into “Forbidden Planet,” a six-cut package that is mostly made up of the “A High Ashen Breeze” section, broken up over three tracks. This is where the charred clouds arrive to set up shop, almost like a violent thunderstorm taking over from an early morning rain. There’s a horrific, doomy haze over these songs, and the drone is penetrating and powerful. Miller also unleashes his black metal-style shrieks here, though they’re never terribly up front an only make up a part of the cacophony. “Alabaster Shithouse” is the most aggressive, attacking song on the album, and one of the heaviest in their catalog, with speedy guitar and a dark pall hanging in the air, and “Veil of Maya (The Lamb Takes the Lion)” opens the collection on a thorny, foreboding note, with Miller’s scariest vocals yet. This is the most straight-forward of the two discs, but it is in no way direct. There’s still a Skullflower, Pyramids, Sunn0)))-style sense of art damage and nightmarish drone that keeps your mind stimulated and wondering.

While Horseback’s catalog is pretty diverse as it is, that’s not where Miller’s artistic endeavors end. He also has a hand in Americana

duo Mount Moriah, along with riveting singer Heathen McEntire (of Bellafea), whose self-titled album is out on Holidays for Quince Records. It may not exactly please a metal fan who needs all blood all the time, but if you can branch out, you might enjoy this. I know I do a great deal. The music is earthy and folky, and as mentioned McEntire’s voice adds another element of humanity and expression to these cuts that really make this record a killer. Along with the music, there’s a DVD included that contains videos. I’ll add a link below in case you want to sample for yourself. Highly recommended.

Relapse also should be commended for bringing Horseback deeper into the consciousness of metal fans and their loyal consumers. Too often, Relapse gets written off as a death/grind haven, and it is that, but they offer much more. They have done similar projects such as Dukatalon, Hero Destroyed, Complete Failure, and excellent smoky rockers Royal Thunder, all with an eye toward expanding awareness for these bands. Horseback is another excellent choice for their roster, and I’m excited to hear what’s in store for us on “Half Blood.”

To check out the label, go here: http://www.relapse.com/